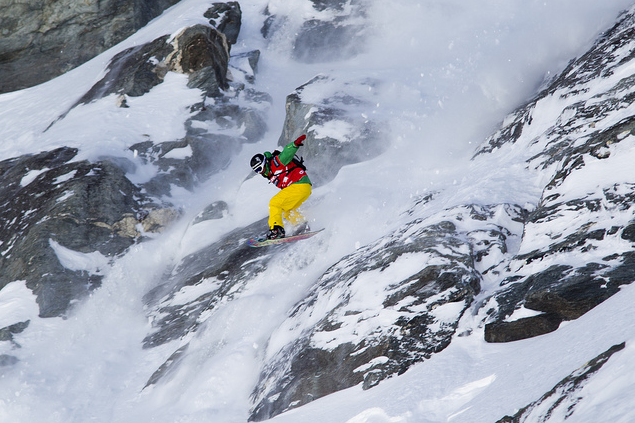 Verbier, Switzerland — Supported by longtime partner Swatch, the Freeride World Tour enters its fifth season, solidifying its position at the very top of competitive Freeriding. Alongside Chamonix Mont-Blanc will be Austria's best kept big mountain secret, Fieberbrunn and a new Scandinavian stop, the tour will descend upon Røldal in Norway for the first time. The world's best freeskiers and snowboarders will then meet for the season finale on the legendary Bec des Rosses in Verbier which continues to stand alone as the world's biggest and most prestigious Freeride competition.

Competitive freeriding has evolved rapidly over the last four seasons with the pros spinning, cliff-jumping and stomping with an ever increasing intensity. We're expecting to see further progression in 2012 as the experienced big mountain riders compete against a new wave of young talent.

Xavier de le Rue, widely recognised as the world's best all-round snowboarder, will no doubt be "charging down the Alps" to win back his title, although Austrian stalwarts Mitch Toelderer and Flo Orley as well as exciting newcomer Christian Schnabel might have a few things to say about that. Swiss rider Anne-Flore Marxer impressed everyone in her rookie season taking the world title at the first attempt but will face stiff competition from Germany's Aline Bock and a field of contenders from both sides of the Atlantic.

"This fifth season promises many things. The riders' performance improves every year and we'll undoubtedly see the bar raised even further in 2012. We have a first-ever Norwegian tour-stop, where we'll be working closely with a very experienced group of local organisers and we will be launching an Expo and Test at three tour stops - Chamonix Mont-Blanc, Fieberbrunn and Verbier. We will continue to actively support the 30+ qualifier events around the world and encourage the next generation of riders with three Juniors stops. I'm also absolutely delighted to see Swatch alongside us as well as so many ski industry partners." Freeride World Tour founder and organiser, Nicolas Hale-Woods.

Freeride World Tour stops in Rosa Khutor-Sochi (Rus) and North America are to be confirmed.