It's winter in the southern hemisphere and freeskiers are taking advantage of the snow. The Subaru Freeskiing World Tour kicked off yesterday in Las Lenas, Argentina, with a two-day invite-only event called the Red Bull Powder Disorder. The format of the competition remains the same as other FWT events, except athletes must hit one of several man-made kickers as they descend the mountain. Although the competition is on a weather hold today, you can watch video from Day 1 above. Read the press release and results below.

This morning thirty-six of the world’s best skiers assembled atop Las Lenas’ famed run, Eduardo’s, looking down on a 2,000-vertical-foot, never-before-seen mix of sculpted booters and natural big mountain terrain. Unlike many other competitions involving built jumps, today’s venue featured hardpack, windcrust, and crud. Despite the conditions, the invited athletes proved why they are the biggest names in international professional big mountain freeskiing.

Guerlain Chicherit (FRA) dominated the men’s field with a huge front flip off the mandatory top air, landing perfectly on his feet, before heading to a 30-foot cliff drop and a front flip off the bottom kicker and into the finish line with a 38.27, the top score of the day.

On his heels, John Collinson (USA) delivered his best ever competition run (31.23 points), with a left side 3 off the mandatory top air, a straight air off the second official jump, and smooth 3 off an athlete-made kicker, known as the Pepsi-Cola jump because they marked take-off with said soda.

Crystal Wright (USA), in her first competition since a broken fibula, proved with her strength, that even though there was a focus on jumps and tricks, that fast and fluid still wins the game (29.47 points). “I know that it always goes back to the basics and conditions and to not slow down on the entire venue,” she said.

Rebecca Selig (USA), known in the past for her aggressive style that often ends in dramatic crashes, held it together like the pro she is, sliding into third (26.07 points).

Yes, former FWT world champion and decade-long Matchstick Productions film star, Ingrid Backstrom, stepped into the gate today with a humble, but proud attitude. She skied strong and solid and placed 5th in her first contest since 2004. 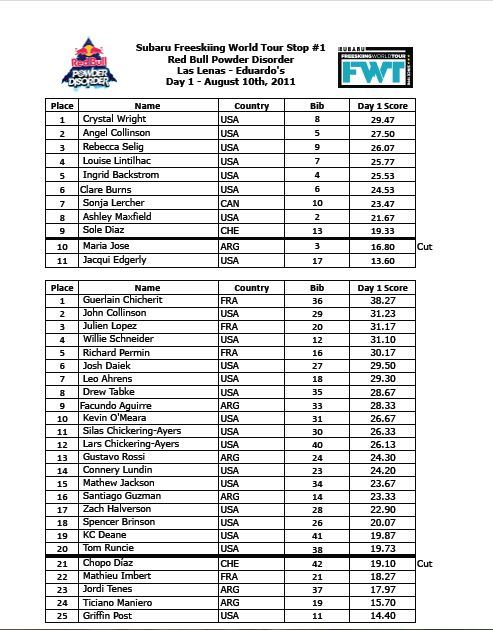