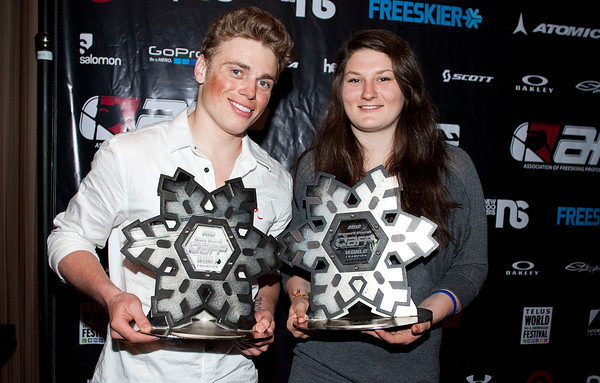 "I knew that I wanted to take this award home again this year and I made it a goal of mine from the start of the season," Gus Kenworthy said. "It’s always satisfying to achieve your goals. It’s been a fun season full of competitions and I have been on the road a ton so I am looking forward to being home a bit and spending some time with my family and friends."

"This gets me excited for Sochi in 2014," Kenworthy said. "And it will be great to see what the next year and a half brings my way."

Devin Logan also said she is excited for the Olympics.

"Sometimes it’s tricky to compete in slopestyle and halfpipe, it can get pretty tiring, but I had an incredible season and this award really brings it home for me, " Logan said. It was my best season so far and I am looking forward to continuing my success next year."

"I am stoked that both of my disciplines are in the Olympics and I’m hopeful that I’ll have a shot to get in," she said. "It’s a really cool time to be in freeskiing and I am lucky to be here."

- Devin Logan (West Dover, VT) won the women's AFP overall standings with two X Games silver medals in halfpipe and slopestyle.
The overall trophies were renamed in honor of the late Sarah Burke and presented at the AFP World Championships April 19-22 in Whistler.