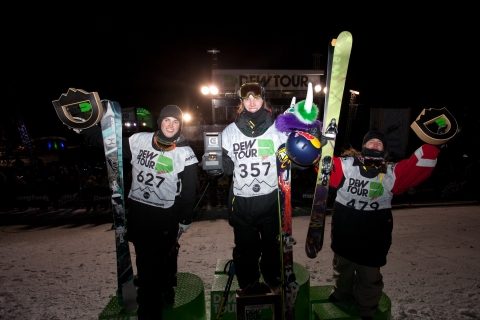 The Dew Tour iON Mountain Championships offered a new discipline to the fans of flight with the addition of the Big Air competition gracing the bottom of the slopestyle course at Breckenridge.

As this was the first time the Dew Tour has hosted a true Big Air event, the excitement was felt from the fans to the athletes and everywhere in between on the mountain – the nighttime aspect only added to the thrills!

The format consisted of twelve skiers broken into two heats of six riding in an organized jam format for eight minute periods or until five runs were completed. The top two riders from each heat automatically advanced into the final round. In addition to those four skiers, the next highest score from both heats also advanced making for a five-man final – during the final round each skier took three paced attempts for their chance at the win.

This format of invited athletes going directly to compete in finals, every skier rode adamantly not leaving anything left on the slope.

In the first heat we saw both Gus Kenworthy and Jossi Wells advance with Russ Henshaw left on the bubble with the third highest score. Then, in the second heat Henrik Harlaut and Kai Mahler advanced automatically while Tom Wallisch slipped in with a score great enough to drop Henshaw out of the final.

Soaring over the 67-foot gap, it was Kai Mahler stomping the best trick of the night, a switch left double misty 1440 double Japan grab, earning him the highest score allowing him to ski out with the win at the inaugural Big Air competition at Dew Tour.

“The jump was so cool, it is big enough to throw anything. I’m stoked I got first! That switch left double cork misty 1440 double Japan grab was the first time I have ever tried that and landed it – I’m so happy I got it on my feet!”

Be sure to check back shortly for a photo gallery posted to the top of this article.