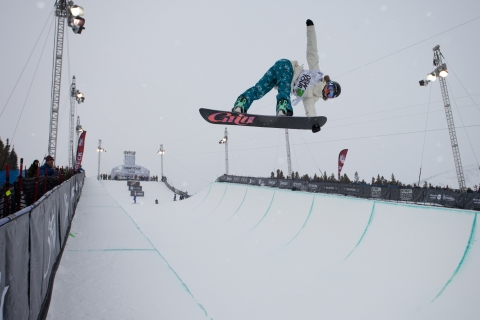 The Dew Tour iON Mountain Championships at Breckenridge, Colorado received a ton snowfall throughout the day Saturday, and to no surprise the Women’s Snowboard Superpipe Final went off without a hitch!

For the first time in superpipe history, the Dew Tour introduced a new camera angle to best showcase the amplitude and style of the riders with a cable camera strung down the center of the pipe showing the runs from drop to final stomp.

The format for the women’s final in the pipe was very similar to the semi-final with each rider taking two runs and only the best score counting toward the win.

Considering in the past three years Kelly Clark has rode away with five stop victories and three consecutive Dew Cups, all eyes were on the Vermont native to ride with style and throw her well recognized 1080.

However, today would be a day of upsets as dropped into her first run and nailed every wall to score an 85.00, while Kelly took a back seat on one wall causing her to put all the pressure on her final run.

Then, Farrington, hungry for the win, took her second run to new heights and upped her score t a 90.00. As Clark dropped in for her final run, she was airing higher than any other woman in the pipe, but on her second to last trick took another back seat and slipped out leaving it to Farrington.

“I was practing well, so I knew I had the tricks and the run that I wanted to do – I wasn’t too nervous going in,” said a confident Farrington speaking to her mindset prior to dropping in. “The pipe at Breckenridge is so good! It couldn’t be better.”

Queralt Castellet and Maddy Schaffrick rounded out the podium in second and third, respectively.