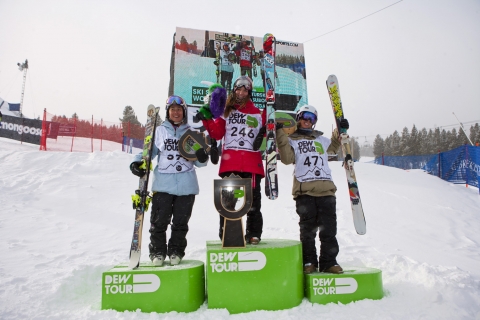 The Women’s Freeski Slopestyle Final broke in the last day of the Dew Tour iON Mountain Championships at Breckenridge, Colorado, and with light snowfall mixed with broken sunshine it was a perfect day for competition finals.

Following a fierce semi-final from the day before, the best six scores advanced skiers into this winner-take-all final for the 2012 Dew Cup, and every women on the slope through everything they had in an effort to take the title.

The Breckenridge local, Emilia Wint was the top qualifier coming into today’s final, and considering her qualifying score was an entire five points higher than the rest, all eyes were on the local lady to come through for the win.

However, as the event went on the snowfall grew and after taking a spill on her first fun, Wint was left in the last place position as she prepared to take the last drop in the final. Wint rolled through the course nailing every hit, but as she approached the final 67-foot booter Wint came up short and knuckled.

This left the win in the hands of yesterday’s third place qualifier Kaya Turski, who nailed her first run of the final that carried her through the rest of the competition. Turski’s first and best run included a switch on front swap on the rainbow box, lipslide to fakie on the next rail, to switch unnatural 360 over the first jump, to switch 540 over the next jump, then 270 onto the next rainbow box, then she wrapped up her run with a 540 then a switch 720 over the final two jumps.

“There is a lot of great talent coming up, all these young girls definitely stepping it up and are keeping on my toes. I think I have the experience, so I played it cool,” said the humble Turski with regard to how she played the conditions and her competition. Turski went on to comment on the Dew tour’s new single-stop format saying, “I think it’s great! Overall I’ve had a great time at the Dew Tour. It’s been a great course… they have been great with working with the athletes. It’s been a fun event and the lounge is awesome!”

Rounding out the podium was Yuki Tsubota, who qualified fifth, with a score of 72.25, and yesterday’s second place qualifier Anna Segal with a 56.75.