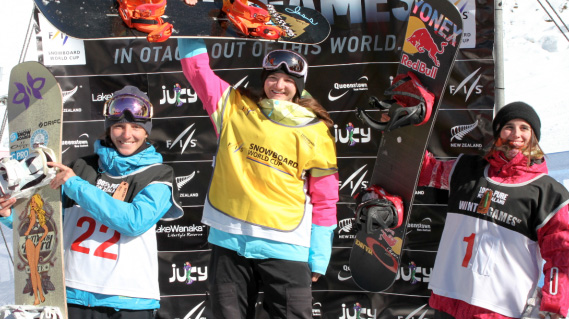 Wanaka, New Zealand – Olympic gold medalist Kelly Clark (West Dover, VT) opened the 2014 Olympic Winter Games qualifying period for snowboarding with victory at the FIS World Cup halfpipe Sunday in Cardrona, New Zealand. Clark, who won double gold at the 2012 X Games, has won a staggering 19 of her last 20 contests. The New Zealand halfpipe marks the first event of the Olympic qualifying period that lasts for the next 17 months.

"With my win and Hannah's [Teter, fourth] good finish, this is a great start to the season for the U.S." Kelly Clark said. "Falling in the first run is never ideal but I tried to look at it as an opportunity. That's exactly what can happen in major events. So it's good to get used to it and this kind of pressure."