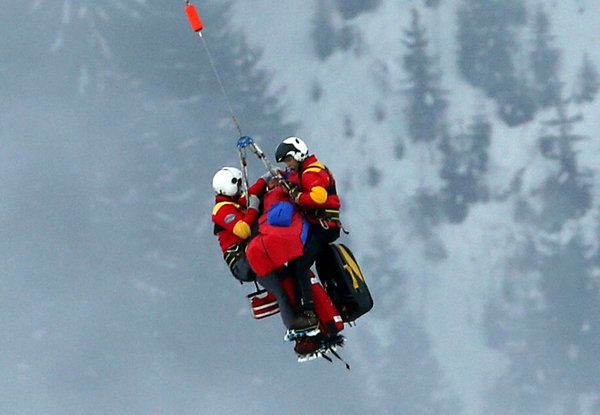 Story via the L.A. Times

Skier Lindsey Vonn was taken to the hospital by helicopter Tuesday after crashing during the super-G at the world championships in Schladming, Austria.

She appeared to have injured her right knee and was treated on the slope for 12 minutes before being airlifted to the hospital.

The injury occurred while the four-time World Cup champion was landing a jump. After losing balance on her right leg, with her knee bending awkwardly, Vonn's ski came off immediately, causing her to go off course and hit a gate before stopping.

The race had already been postponed 3½ hours due to fog and several competitors struggled due to the weather.

“It's not a very difficult course, but in some parts you couldn't see anything,” Fabienne Suter of Switzerland said.

Vonn had just returned to racing earlier this year after taking nearly a month off to recover from an intestinal illness.