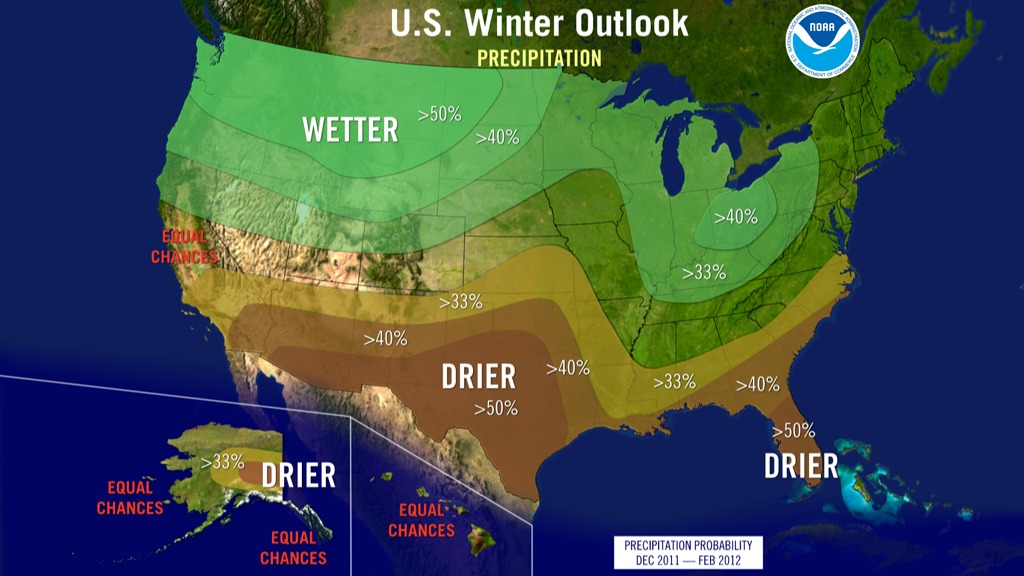 For the 2011-12 winter, the Pacific Northwest is set to get pummeled with snow while the Southern Plains are predicted to be dry. In the middle of the two regions are the Rocky Mountains, which this report doesn't specifically address. However, it does confirm that La Nina is back. Last season, that meant big snow for most of the mountain West. Throwing a curve ball in the mix is "Arctic Oscillation," which can be both good and bad for skiers. Read on to learn more about this winter's predicted weather patterns.

The Southern Plains should prepare for continued drier and warmer than average weather, while the Pacific Northwest is likely to be colder and wetter than average from December through February, according to the annual Winter Outlook released by NOAA.

For the second winter in a row, La Niña will influence weather patterns across the country, but as usual, it’s not the only climate factor at play. The ‘wild card’ is the lesser-known and less predictable Arctic Oscillation that could produce dramatic short-term swings in temperatures this winter.

NOAA expects La Niña, which returned in August, to gradually strengthen and continue through the upcoming winter. It is associated with cooler than normal water temperatures in the tropical Pacific Ocean and influences weather throughout the world.

“The evolving La Niña will shape this winter,” said Mike Halpert, deputy director of NOAA’s Climate Prediction Center. “There is a wild card, though. The erratic Arctic Oscillation can generate strong shifts in the climate patterns that could overwhelm or amplify La Niña’s typical impacts.”

With La Niña in place Texas, Oklahoma, New Mexico and parts of surrounding states are unlikely to get enough rain to alleviate the ongoing drought. Texas, the epicenter of the drought, experienced its driest 12-month period on record from October 2010 through September 2011.

Stormy periods can occur anytime during the winter season. To improve the ability to predict and track winter storms, NOAA implemented a more accurate weather forecast model on Oct.18. Data gathered from the model will support local weather forecast office efforts to prepare for and protect the public from weather events. This service is helping the country to become a Weather-Ready Nation at a time when extreme weather is on the rise. 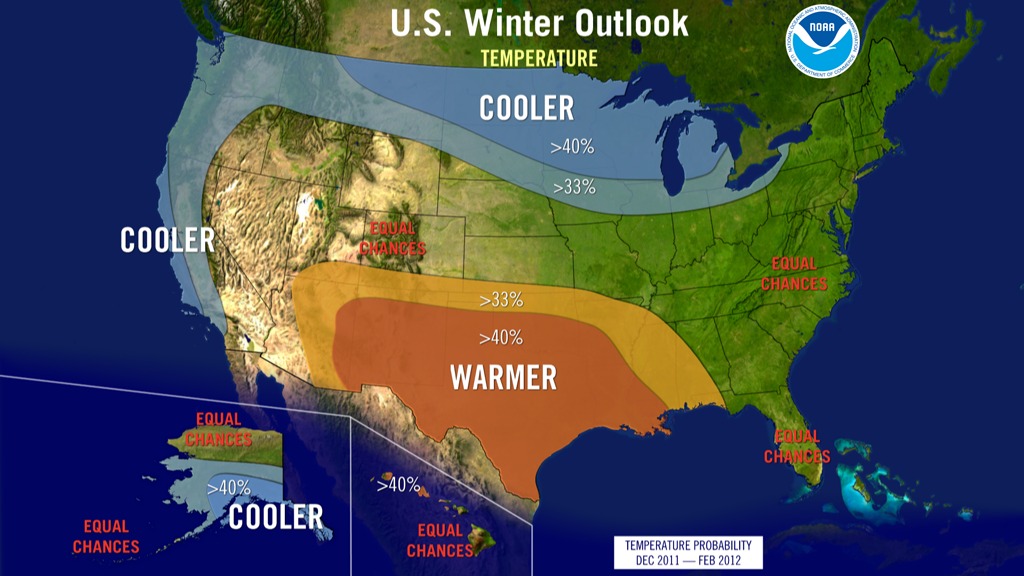 According to the U.S. Winter Outlook (December through February) odds tilt in favor of:

• Pacific Northwest: colder and wetter than average. La Niña often results in below-average temperatures and increased mountain snow in the Pacific Northwest and western Montana during the winter months. This may set the stage for spring flooding in the Missouri River Basin;

• Northern Plains: colder and wetter than average. Spring flooding could be a concern in parts of this region;

• Southern Plains and Gulf Coast States: warmer and drier than average. This will likely exacerbate drought conditions in these regions;

• Florida and south Atlantic Coast: drier than average, with an equal chance for above-, near-, or below-normal temperatures. Above normal wildfire conditions;

• Ohio and Tennessee Valleys: wetter than average with equal chances for above-, near-, or below-average temperatures. Potential for increased storminess and flooding;

• Northeast and Mid-Atlantic: equal chances for above-, near-, or below-normal temperatures and precipitation. Winter weather for these regions is often driven not by La Niña but by the Arctic Oscillation. If enough cold air and moisture are in place, areas north of the Ohio Valley and into the Northeast could see above-average snow;

• Hawaii: above-average temperatures in the western islands with above normal precipitation during the winter. Some drought recovery is expected across the state with Kauai and Oahu having the best potential for full recovery.

• Alaska: colder than average over the southern half of the state and the panhandle with below average precipitation in the interior eastern part of the state.

This seasonal outlook does not project where and when snowstorms may hit or provide total seasonal snowfall accumulations. Snow forecasts are dependent upon winter storms, which are generally not predictable more than a week in advance.