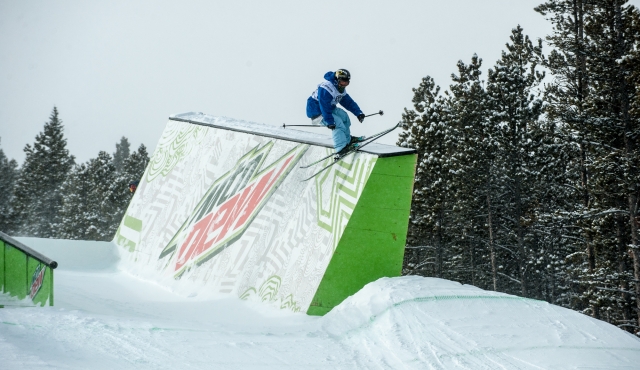 The Dew Tour iON Mountain Championships at Breckenridge, Colorado wrapped up the final day with three slopestyle events, and the Men’s Freeski Slopestyle Final was without a doubt a highlight to the day as they skied with strength through what many athletes had referred to as, “the best course ever.”

Following the 31-man final from yesterday, only the top twelve were allowed to return to throw it all on the line for their chance at taking the 2012 Dew Cup.

As the top twelve skiers began to take their turns on the slopestyle course, the snow began to flurry making for a true winter competition allowing some riders to flourish while others had to make adjustments in order to excel.

With James Woods, aka Woodsy, coming into the event as the top qualifier from semis, he was looked to be a favorite to do well. However, between the conditions and the stacked competition, this event was anything but predictable.

As it came down to Woodsy’s final run, he seemed to have his entire run as he wished, but as he approached the final jump he decided to ride to the side and let this event go to the Aussie Russ Henshaw who scored a whopping 84.50 on his first run.

Topping the podium was Henshaw, and directly behind him in scores were Andreas Hatveit and Henrik Harlaut taking second and third, respectively.