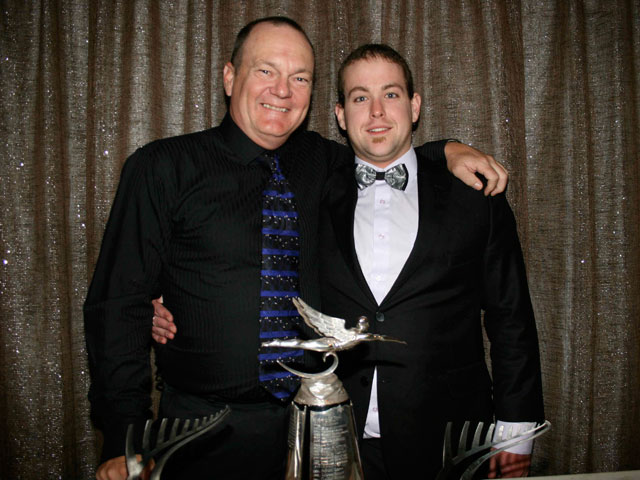 Adam Hall, Athlete of the Year, poses with coach Scott Olson, Coach of the Year. Photo via Snow Sports NZ

Lake Wanaka, New Zealand – Skier Adam Hall was awarded Snow Sports New Zealand’s coveted Overall Athlete of the Year Award friday night. Adam had his best year ever, taking Gold in both Slalom and Super G at the World Cup in Winter Park, Colorado, and in Slalom and Super Combined at the World Cup Finals. Now dominating in both technical and speed events, Adam is in a great position to come home from his next Paralympic Winter Games with multiple medals.

Adam credited much of his amazing success over the past season to his new coach, Scott Olson, who took out this year’s Coach of the Year award, and to his support team. He acknowledged the successes of his adaptive teammates Carl Murphy, nominee for Adaptive Athlete of the Year and Snowboard Athlete of the Year, and Corey Peters, nominee for Emerging Talent, suggesting that Adaptive Snow Sports NZ “could easily feature one of its largest teams ever at the 2014 Paralympic Games in Sochi.” Adam said that, while his mother Gayle Hall is no longer with us, she is still a voice in his ear everyday, pushing him towards success at the Sochi 2014 Paralympic Games.

The Emerging Talent of the Year award went to freeskiing’s Rose Battersby. Rose had a standout first season of international competition with several top ten finishes. She placed 9 in Slopestyle at the Winter X Games and Euro X Games. She also took 9 in Halpipe at the AFP World Championships in Whistler. She was on the podium at the AFP World Championships with a third place finish in Big Air.

The Overall Athlete is selected from finalists in each sport category. Finalists this year included:

Sam became the first ever to podium at three consecutive World Freeride Tour stops. He won the Chamonix stop and then went on to place second in Courmayeur and third in Roldal. He was ranked number one for almost the entire season and, had he not taken a fall in the finals, was in prime position to end his season ranked number one on the world tour. The fall landed him with a still very respectable fourth place ranking on the tour.

Ben is New Zealand’s National Champion in Super G, Giant Slalom and Slalom. He placed second in GS and Super-G at the National Championships and is the lowest FIS points holder amongst kiwis in both disciplines.

Andy placed 18 in 15km Skate and first in the CIS (Canadian Interuniversity Sport) Division at the Canadian National Championships. He was second overall in CIS Nordic skiing. He represented New Zealand at the U23 World Championships and placed 40 in Pursuit. He was winner of the Winter Games New Zealand winter triathlon.

Rebecca started her Northern Hemisphere season with a fourth place finish at the TTR World Championships. She then went on to take 6 at the European X Games. She placed tenth at the prestigious US Open and ended her season with a win at the Rockstar Throwback Throwdown where she took first in Superpipe and second in Minipipe for the overall win.