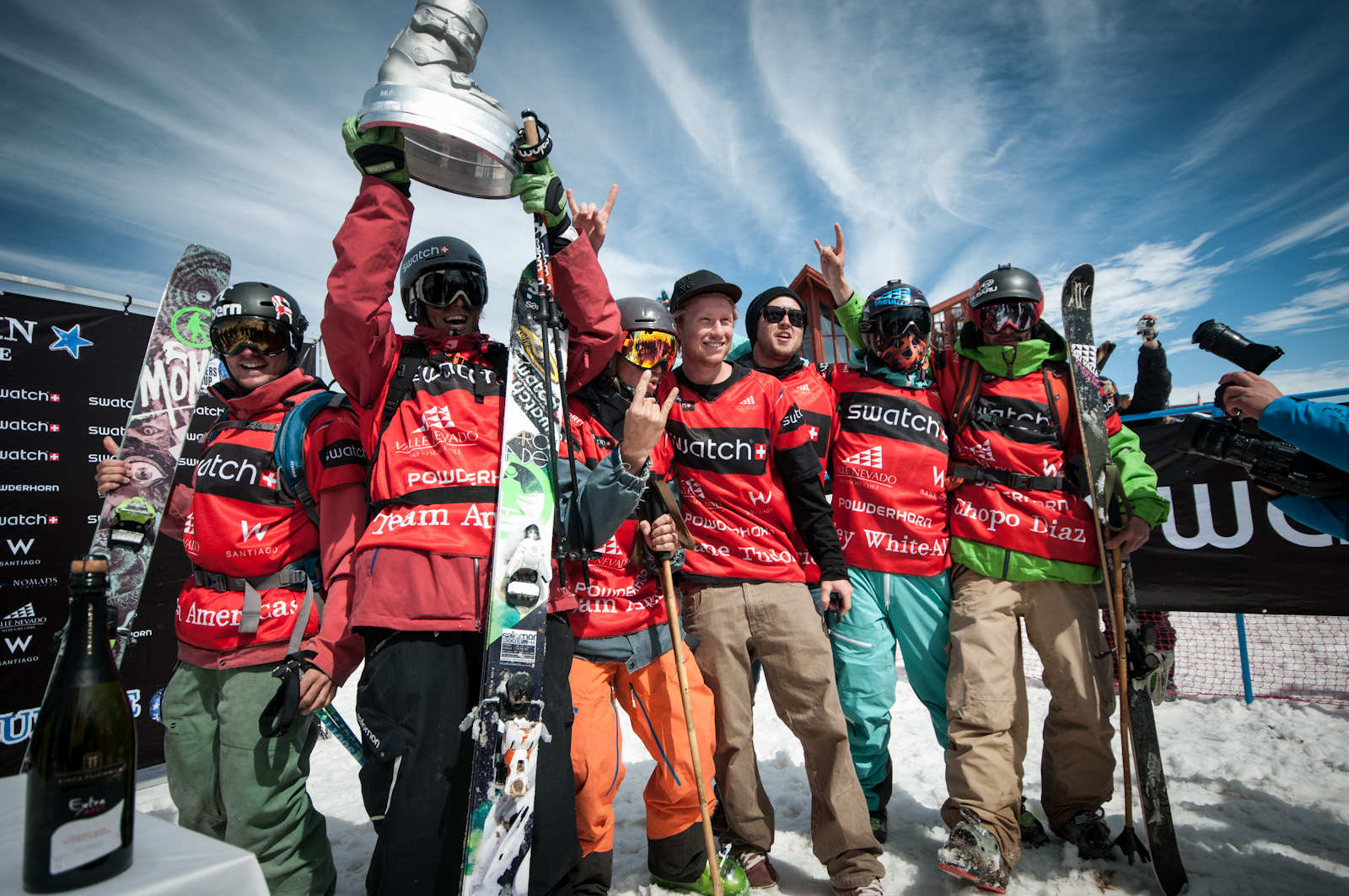 With a final score of 10 - 9, Team Americas takes the SWATCH SKIERS CUP trophy from defending champions Team Europe. More exciting news also comes out of the day, as organizers proudly announce a 3rd edition of the event to be held in Zermatt, Switzerland for February 2013.

Valle Nevado, September 7, 2012 - Due to unsafe snow conditions on today's intended Backcountry Slopestyle course, athletes and organizers took a last minute decision to change plans and hold a tiebreak-style match with only three riders from each team on a higher venue with better snow conditions. After the uncertainty and suspense of the final day, and due to amazing performances from its chosen riders, Team Americas emerged victorious, winning the 2nd edition of the SWATCH SKIERS CUP.

Changing the format of the event at the last minute was an extremely difficult decision for organizers and athletes alike. The variety of riding that both the Big Mountain and Backcountry Slopestyle heats offer is a trademark of the SWATCH SKIERS CUP, and everyone involved was wary of losing out on the freestyle component of this progressive event. However, thanks to the quick action of the organizers, and incredible riding by the athletes, the event was able to showcase cutting-edge riding in a high-mountain venue behind Valle Nevado ski area.

Each team had to choose only three riders to compete in the tie-break.

“I chose my guys based on a combination of their motivation and enthusiasm in the moment and their abilities as creative freestyle skiers, because what I want is to push the level of riding at the event. If we would have won today we would have won with style,” commented event co-founder and Team Europe captain Sverre Liliequist.

Event judge Mark Abma also had praise for the riding of Team Europe.

“Markus Eder's run was amazing, spinning 360s in both directions and incorporating a rodeo 540 and a rodeo 720, all off of the natural terrain found on this backup venue,” said Abma.

In the end, however, Team Europe couldn't stop the charge of Team Americas. With the score tied after the first two matches, it was up to KC Deane (USA) and Paddy Graham (UK). Paddy was building an impressive run, but took a hard impact on the landing of one of his airs, putting his knees to his chin, bringing his run to an end. Deane dropped in with a huge backflip at the top of the face and finished the run in impressive style, thus winning the tiebreaker and the SWATCH SKIERS CUP trophy for his team.

The event born in the minds of Sverre Liliequist and Kaj Zackrisson is here to stay. Swatch Proteam member Kaj Zackrisson comments: “This is a dream come true! We are very excited to announce that we will meet next February in Zermatt. We knew from the beginning we had a super fun event concept, and this has let us attract the best skiers in the world. Get ready for more!”

Freeride World Tour standout and mountain guide Samuel Anthamatten responded enthusiastically to the news that the event is coming to his home town.

“Zermatt is proud to host the 2013 edition of the SWATCH SKIERS CUP. The playground we have here is endless — surrounded by the highest mountains in the Alps, Zermatt offers challenging venues and a spectacular panorama. The local community will live the event with passion and we are looking forward to welcoming riders and guests for an amazing time!”

The two team captains for the next edition have already been confirmed. Cody Townsend (USA) will lead Team Americas and Kaj Zackrisson (SWE) will be in the driver's seat of Team Europe. Until they meet in the shadow of the Matterhorn, Team Americas will proudly guard the SWATCH SKIERS CUP trophy, their names now engraved on this piece of ski history.