Killington, Vermont - There was no room for error among the field of 14 freeskiers if the guys had any chance of cracking into the top three at Sunday's Pantech Invitational freeski slope Finals. It seemed like the win was in the bag for Bobby Brown, after he scored a 93.00 in his first run with his signature style; smooth and solid on the rail sections and huge and blasting over the three jumps. He stomped his landings and his score held on straight through until the last guy to drop in for second runs.

If the last to drop had been anyone other than Tom Wallisch, there may have been no contest. But Wallish was coming off a win at last month’s Dew Tour in Breckenridge, where he came back in his second run to take the title. In true Wallisch style, he did it again here in Killington. Not only did he bump Brown into second, he did it by scoring the highest ever in Winter Dew Tour freeski history with a 95.25. 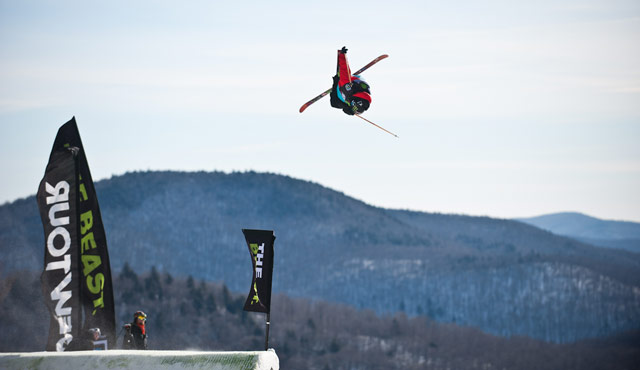 Tom Wallisch competes in the Dew Tour on Sunday at Killington. 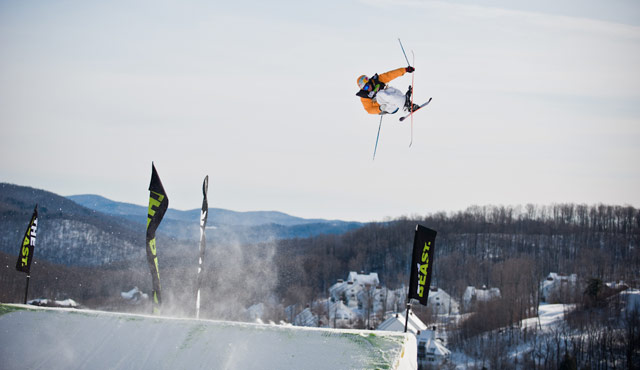 Bobby Brown boosting during the slopestyle.

It had to be a letdown for Brown, who wasn’t able to increase his initial lead on his second run after falling on the last hit, but he didn’t let it show.

“I’m just stoked on how I did, obviously Tom just threw an amazing run and I’m stoked for him,” Brown said. “Now I’m just looking forward to X Games next week.”

Seventeen-year-old Nick Goepper knocked Sammy Carlson off the podium into fourth after he finished his final run, so the competition was heated straight through to the last minute.

Wallisch is now in the overall lead heading in to next month’s finals in Snowbasin, where Brown will be fighting back as the defending Dew Cup champ.

In the women's field, Devin Logan conquered the rail sections and jumps to nearly take the win at Sunday's Pantech Invitational slopestyle Final, until Kaya Turski fought back in her last run to win it with 92.25.

"I have my whole family and friends here with mu just trying to keep me calm," Turski said. "I tried not to think about the first run, tried to keep it together. It was a new run, so I was all in." 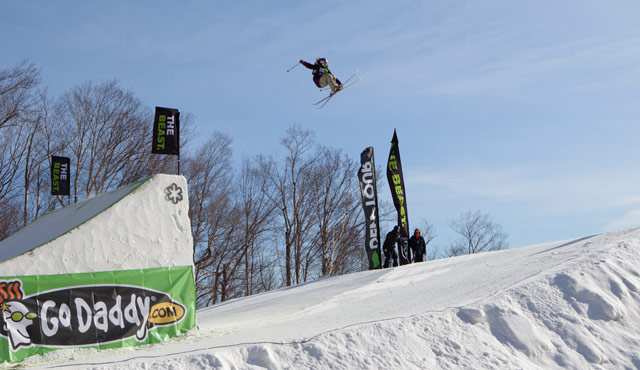 Turski's run went like this: Front switchup on the down bar, into a switch gap to the downbox, into a 180 on the cannon to switch 3 off. On the jumps, she startede with a switch 5, into a 5, to finish with switch 7.

Many among the field of 6 freeskiers struggled to put down clean runs, with the massive jumps offering no mercy. But the girls rose to the occasion and Logan's score of 90.50 held on until Turski came through as the last girl to drop.

"I came a little short (on last jump) and I knew next run I had to just go in a little faster," Turski said. "I went at it straight and tucked as much as I could and hoped for the best. The wind was a little tricky today, but I made it through."