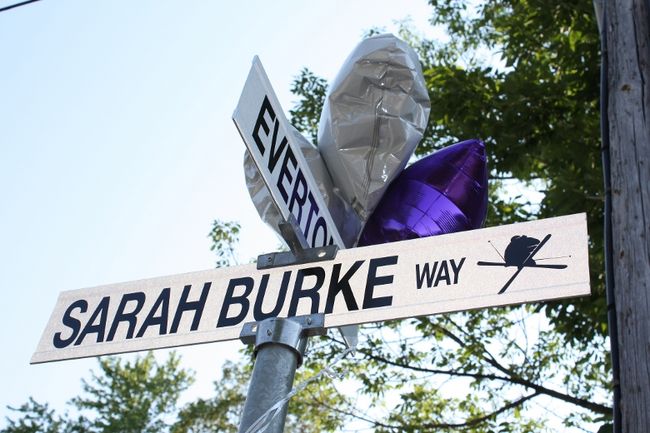 Midland, Ontario - The logo on the new Sarah Burke Way street sign in Midland features a freestyle skier, but it's the little happy girl who got on and off the school bus and the one who loved trampolining in her yard that family, friends and neighbours remember.

"Most of our memories is not of the skier but of a special human being who made everyone feel good," said her father, Gord Burke.

The renaming of Huron Street to Sarah Burke Way was a complete surprise to the Burke family.

"It makes me feel pretty good," said the late skier's father. "It honours Sarah so much. It makes me think of my neighbours, of the kindness of them, how they've helped out so much."

Burke said his daughter loved Midland and that she would be proud of the honour bestowed on her.

About 50 people attended the unveiling Thursday afternoon, including the Burke's neighbours, Debbie and Rick Dalziel, who were instrumental in getting the street renamed.

The sign project was completed in about six months and the unveiling was attended by Midland Mayor Gordon McKay.

The mayor gave an eloquent speech about the historic moment and gave tribute to the late four-time Winter X Games gold medallist.

"She's truly a remarkable lady. She revolutionized her sport and showed what inspiration and dedication is all about," McKay said.

Within two days of the 29-year-old Canadian freestyle skier's death, Burke's neighbours developed the idea of having her street named after her.

"My wife and I just got talking and we came up with this idea to rename the street to Sarah Burke," said Rick Dalziel.

He and his wife started a petition that was "unanimously" signed by all the neighbours.

"It filled up quickly," Dalziel said.

They took that petition to the Midland chief administrative officer, Ted Walker, who took it to mayor and council.

"They did a wonderful job how fast they made this happen," Dalziel said.

The Burke family has lived on the street for 22 years.