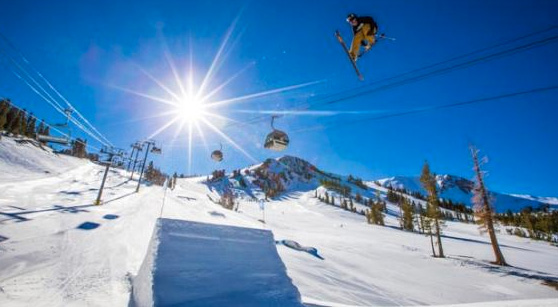 Mammoth Mountain, California – In preparation for the 2013 competition season, some of U.S. Freeskiing’s best slopestyle skiers are hitting Mammoth Mountain’s Unbound Terrain Park. Boasting the most open terrain in the country athletes like X Games gold medalist Tom Wallisch (Pittsburgh, PA) and AFP overall World Champion Gus Kenworthy (Telluride, CO) have been lapping the park perfecting their runs for the season. Newly back on skis from an injury last January, five time X Games medalist Sammy Carlson (Hood River, OR) and teammates have been utilizing Mammoth Mountain’s 55-foot tabletop jumps and rails to practice for the upcoming season.

"It feels so good to be on snow and getting my tricks back on point," Sammy Carlson said. "The weather at Mammoth has been awesome and I am stoked on being here; they always kill it with their terrain park. I’m really working on my run for Dew Tour, Grand Prix and X Games. It’s cool having Tom and my other teammates here to push me. I’m for sure having a fun time."

The U.S. Freeskiing Team heads to Breckenridge, CO on Dec. 12 for the first AFP platinum level event of the season, the Dew Tour.