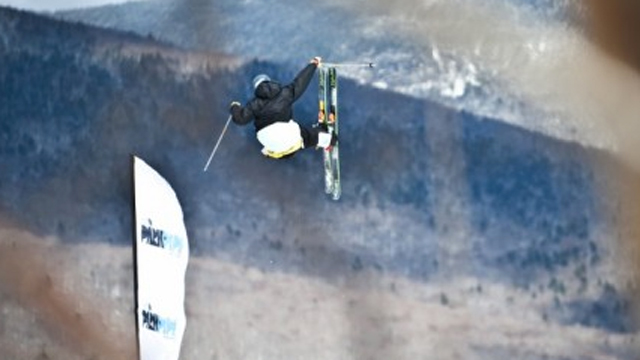 The final stop of the 2012 The North Face Park and Pipe Open Series concluded under sunny, blue skies at Waterville Valley, New Hampshire. Twenty thousand dollars in prize money was awarded to the top finishers, with Kolby Ward of Telluride, Colorado and The North Face athlete, Devin Logan of Mount Snow, Vermont taking top honors in the park competition. Topping the podium in the nighttime big air event was Erik Hughes of Park City, Utah and the champion from the women’s park competition, Devin Logan.

Qualifiers for the men’s park competition took place on Friday, with over fifty male athletes trying to advance into the semi-finals in a best of two run AFP judged format.

On Saturday, with sunny, clear conditions, twenty competitors battled it out in the park semi-finals narrowing the field down to eight men for finals.  Taking top honors for the men was Kolby Ward, who skied a very technical and clean run, consisting of a switch left-side 720 japan, a switch right-side 720 mute, and a switch left-side 900 mute to japan on the jump line. He then attacked the rail portion of the course with a left-side 270 onto the “Jersey Barrier” rail, a front swap on the down bar, and finally a switch lip front-side 270 onto the staircase rail, scoring an 89.25.

“After crashing in his first finals run on a switch 1260, Kolby laid down a super technical run consisting of switch spins in both directions, and near flawless rail features., putting himself on the top of the podium. ” stated AFP head judge for the event Dan Allen.

Rounding out the men’s podium in second place was the park champion from Northstar, James Campbell of Sugarloaf, Maine scoring an 86.75 and Alex Gorham of Stowe, Vermont in third with an 83.50.

In the women’s park competition, The North Face athlete Devin Logan, continued her highly decorated competition season by dominating the women’s field by nearly ten points. Devin successfully landed a jump run consisting of a switch left-side 360, a switch left-side 540 mute, and a forward left-side 360 tail. She then 270’ed onto the “Jersey Barrier” rail, switch buttered onto the down bar, and finally slid the staircase rail forward to forward, scoring an 88.75.

In second place was Annalisa Drew of Sugarloaf, Maine, laying down a progressive left-side rodeo 720 in her first run, receiving a score of 79.50. Rounding out the women’s podium in third was Julia Marino of Loon, New Hampshire with a score of 75.50.

The big air competition took place under the lights at the base of Waterville Valley Resort on Saturday night with hundreds of spectators cheering on all the competitors. A 45-minute jam format, with overall impression criteria, advanced five men into the big air finals for a best run of two to determine the champion of the night.

“Erik’s double cork 1260 high mute was flawless and got the crowd as equally stoked as the judging panel.” noted AFP judge Jon Lang.

In second place was Alex Beaulieu of Mont Original, Canada stomping the landing on a switch left-side double rodeo 900 mute grab. Rounding out the podium was top finisher from the park competition, Kolby Ward of Telluride, Colorado, successfully landing a switch left-side 1080 mute to japan grab.

On the women’s side, only two females decided to throw down under the lights, and in the end, The North Face athlete and the champion from the women’s park competition, Devin Logan took top honors with a smooth left-side 540 tail grab. In second place was Annalisa Drew of Sugarloaf, Maine showing the judges and crowd her talents attempting a left-side rodeo 720, just missing a clean landing.