Ontario has No Snow, but Blue Mountain is #Winning 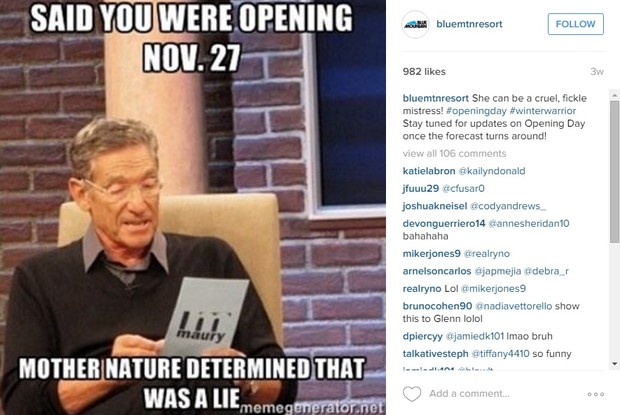 By this time, we've pretty much established that the El Niño weather pattern can do beautiful things for the West, and sort of... well, kills dreams in the East. Right now, it looks like Mother Nature has given nothing but lemons to places like Blue Mountain in Ontario, which is looking to re-open some of its summer activities while they wait for cooler temps. A part of the country that already gets very little natural snow is getting hammered harder - it's too warm to even bother with firing up the snow guns.

It's been hovering around 40°F (or 4.5°C for our Canadian friends) in recent days, which is chilly, but not enough to keep snow on the ground. Temperatures are a little lower near the top of the ski hill, which is around 700 feet higher than the base village, so resort snowmakers have focused their efforts up high. For now though, the base is still green enough to justify the re-opening of the mini-golf and ropes courses. There's still reason to hope though.

"All it takes is one storm system to roll in, drop some rain, then drop some temperatures, then we see some snowfall and snow on the ground," said CBC Meteorologist Jay Scotland. He added that a winter this warm hasn't been seen since the late 90s.

RELATED: Why You Should Shut Up & Stop Worrying About El Niño

Even with the lemons Momma Nature gave them, Blue Mountain has managed to make lemonade and is still #winning in our minds. Why? 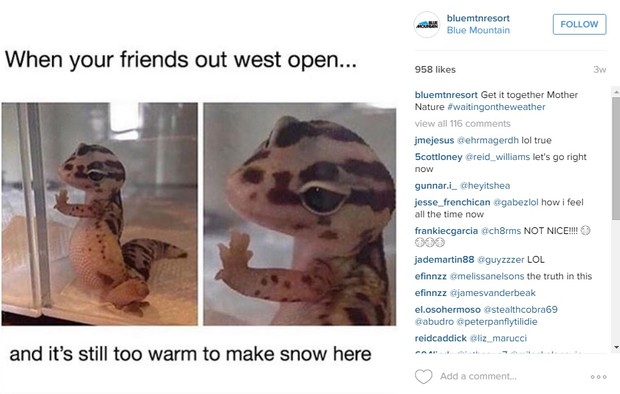 Because if nothing else, a little holiday cheer can be gained from Blue Mountain's Instagram feed - a sense of humor might just be what gets them through this rough time.

Until things cool down and the snow starts falling, our fingers are crossed for our snow-loving friends in the East.