Opinion: Why it’s So Rad Gus Kenworthy Just Came Out 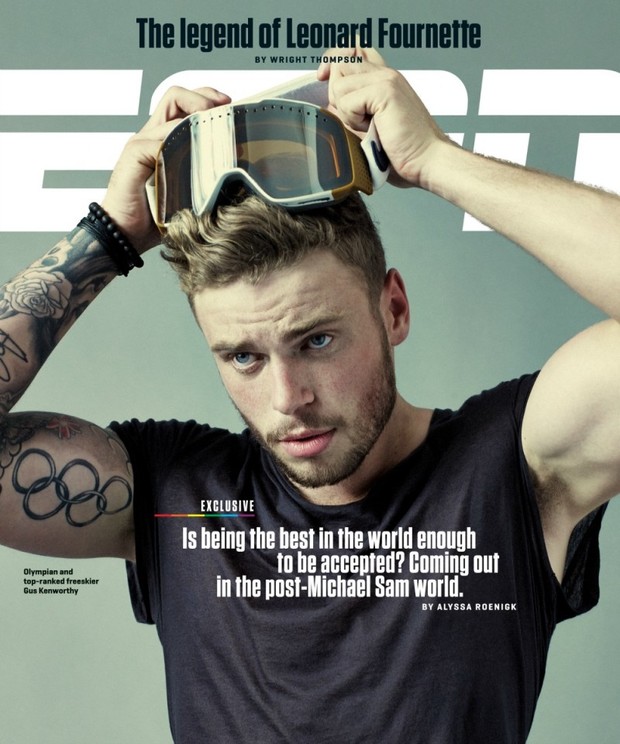 Yesterday, ESPN made the move of featuring a rare action sports icon–Olympic medalist skier Gus Kenworthy–on the cover of their magazine, replacing the normal layout of some better known sports figure dunking or touchdowning with a tatted skier mounting up some goggles. Why? Because Gus had come out to ESPN The Magazine’s Alyssa Roenigk, and in a lengthy interview and follow-up story, explained at length what had kept him from expressing openly that he was gay despite knowing it since he was just five years old.

Action sports culture has always occupied an odd position in western culture as a whole. While many of us hold views and attitudes more progressive than the status quo–say, when it comes to work/life balance, environmental issues, or hell, recreational drug use–we’re often off the back when it comes to things like racial, cultural, and gender diversity, and “gay” has been used for a long time as a blanket statement for anything perceived as uncool in a culture where cool is the shared value held in the highest regard. It’s a culture that’s been slow to budge from a perspective centered on white heterosexual males, who largely define what is in many ways a monoculture, and not the haven of self-expression so many defend it as.

Kenworthy said as much in his interview with ESPN, worried to a painful degree that coming out of the closet would slurry, in many fans and fellow athletes’ eyes, his talents as a skier even after an Olympic slopestyle performance so absurdly oozing in ability that I would have excepted him to admit to being a robot before I’d imagine him coming out as gay. Either way, his announcement has hardly diminished his reputation as a skier, and has instead only showcased a social bravery that’s sadly uncommon in the action sports world.

It also outed several of the community’s more outspoken bigots, like Terje Haakonsen, who reacted with a Tweet asking “Aren’t all skier gay?”, the same tired statement that’s passed as a joke in snowboarding for years. Among many other things, we can thank Gus for giving the more respectful among us the courage to say something when we hear similar jokes in the future, instead of biting our tongue.

And, while Michael Sam became famous as the first openly gay player in the NFL, and possibly the first openly gay male athlete in a big national sport, Gus is a way better icon for the cause. Close sources who actually pay attention to stick and ball sports tell me Sam was cut at the end of his first training camp, and only got to play football in Canada, which is like only having been good enough at curling to play in central Florida. Despite skiing’s complete irrelevance to so much of the population, I still think a silver Olympic medal trumps that.

Thanks for scoring one for the two-plankers, Gus, and here’s to a bright, open future dominating parks for years to come.