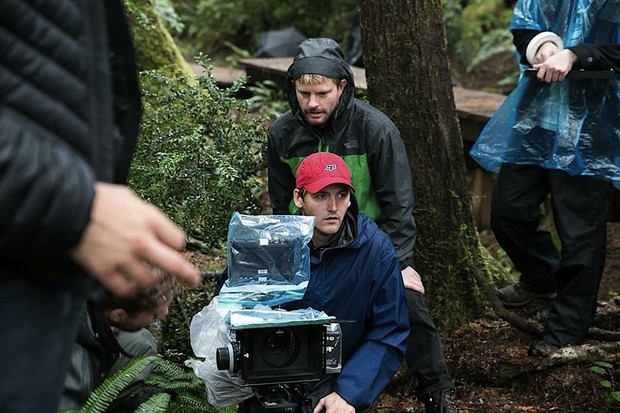 Ex-pros transitioning to production isn't a new story. That said, few of those working behind the camera have managed to write screenplays, cast actors, shoot films, and produce them quite the way snowboarder-turned-director Lukas Huffman does.

After his professional career ended, Huffman attended film school at Columbia University. He started creating independent feature films like When the Ocean Met the Sky, a 2014 film about estranged brothers uniting and trekking into a remote wilderness to get their inheritance. This year, he's turning his creative agenda back to snowboarding. He kicked off a crowd-funding effort in November for AERIS, a narrative film about an up-and-coming female snowboarder.

We recently caught up with him to ask about his project. Here's what he had to share.

Can you describe your project and its storyline, and why it's an important one for snowboarding? 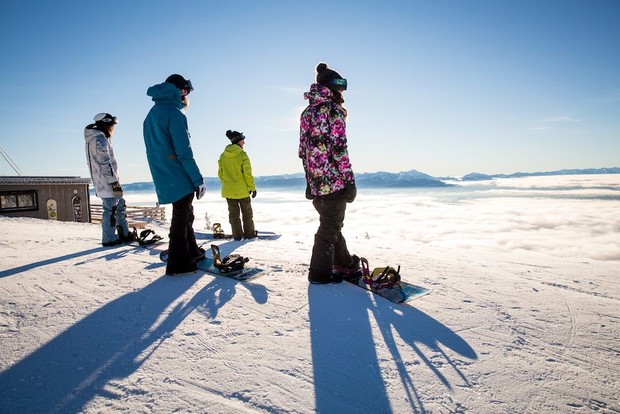 The fun of creating this story is that I took a very typical “sports genre” plotline, but placed in the snowboard world and created an atypical hero. It’s much like Rocky where you see an underdog prove themselves against physical and emotional adversity to become one of the best athletes in the world. But, instead of Rocky being the center of the story, we are telling the story of a scrappy 19 year old female snowboarder named Terra. And, instead of seeing the world of boxing we see the world of competitive snowboarding.

So, our story shows Terra getting a taste of her dream to travel the world and do slopestyle competitions. But, before she can realize her full-potential, she blows her knee out and has to return home to her dead-beat Dad. Back at home she heals physically, but is forced to deal with family disappointment.

I won’t give anything away, but through the film Terra grows out of her self-destructive lifestyle, so that she can have a better relationship with her family, which in turn enables her to be the best snowboarder she can be. Which, it turns out is one of the best in the world. Period. Of course, some of the fun in creating a sports drama is crafting epic action sequences.

How did you transition to becoming a filmmaker after you left the pro scene? 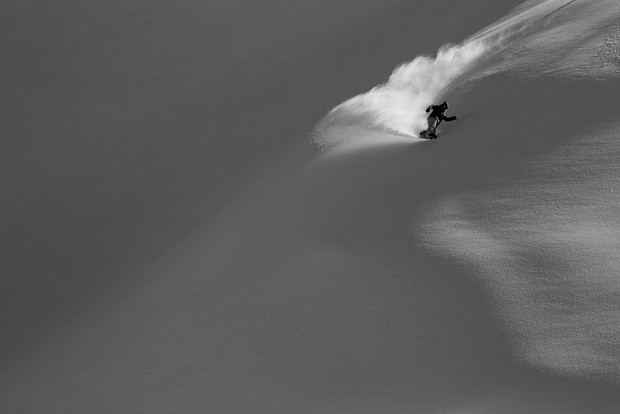 Backside slash from Natasza Zurek on the set of Aeris. Adam Moran photo.

I grew up riding in Vermont. As soon as I graduated in 1996, I moved out west to pursue a career as a professional. I think rose through the pro ranks in the 2000s. I filmed for videos and had sponsors. I didn’t do many competitions. I traveled to where the best snow was, found the biggest rock to jump off, and then we filmed that.

Towards the end of my career, I was close to the production process of the snowboard movies and learned first hand about creating media. In 2007, I was super-burnt out on the emotional toll of traveling and the physical abuse of riding, so I retired from snowboarding. This coincided with a strong desire to apply my passion for film production to narrative movies.

As you know, in snowboard movies you can’t tell a story. The audience doesn’t really want that. I’ve had a lifelong love for film and cinematic storytelling. When I retired I moved to New York City and went to Columbia University for filmmaking. Since I graduated in 2011, I’ve been honing my narrative filmmaking craft. So, this project is the combination of two great passions: snowboarding and filmmaking.

What inspired you to create this film? 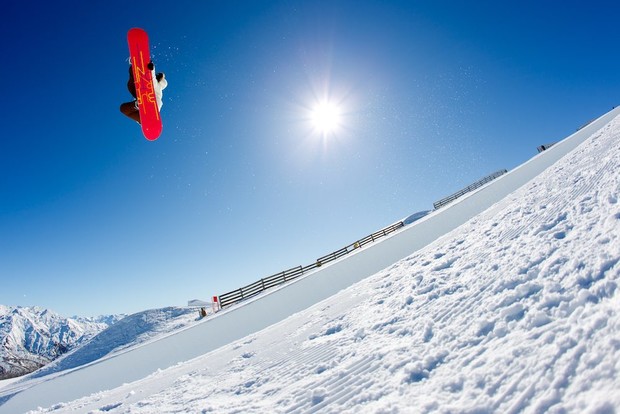 There are two major inspirations. One is the opportunity to tell a story about a sport, snowboarding, that means everything to me in a way that’s never been done before. There have been comedic snowboard movies and lame dramas, but there has never been a narrative film that has treated snowboarding with the respect that my friends and I have for the sport.

We will show how dedicated professionals are to the sport, and the amount of physical abuse they take to have their careers. And, we will also show the pay off, which is the adrenaline rush of flying through air and landing tricks. Also, I’m excited to present the culture of snowboarding in an authentic way. The snowboard world is full of passionate people who live life for the sport.

There have been comedic snowboard movies and lame dramas, but there has never been a narrative film that has treated snowboarding with the respect that my friends and I have for the sport.

We will show how dedicated professionals are to the sport, and the amount of physical abuse they take to have their careers. And, we will also show the pay off, which is the adrenaline rush of flying through air and landing tricks. Also, I’m excited to present the culture of snowboarding in an authentic way.

The other inspiration is the character. In writing the character of Terra, I have fallen in love with her. She has a natural snowboard talent that is awesome to watch. Then, because of her upbringing, she has had to fend for herself. It was fun to see the resilience of this character express itself within the snowboard industry, which is a business hustle. And, she shows physical resilience in how much danger she faces every time she rides. Yet, she’s just a young, 19-year-old girl, so she has a side to her that just wants to party with her friends and dream big.

The interesting thing about Terra is that she’s actually living her dream. Anyways, as I wrote the script, the character that emerged on paper was inspiring [enough] for me to see this project though.

Can you talk specifically about the female athletes you encountered as a snowboard professional, and which of those women might have inspired you to tell this story? 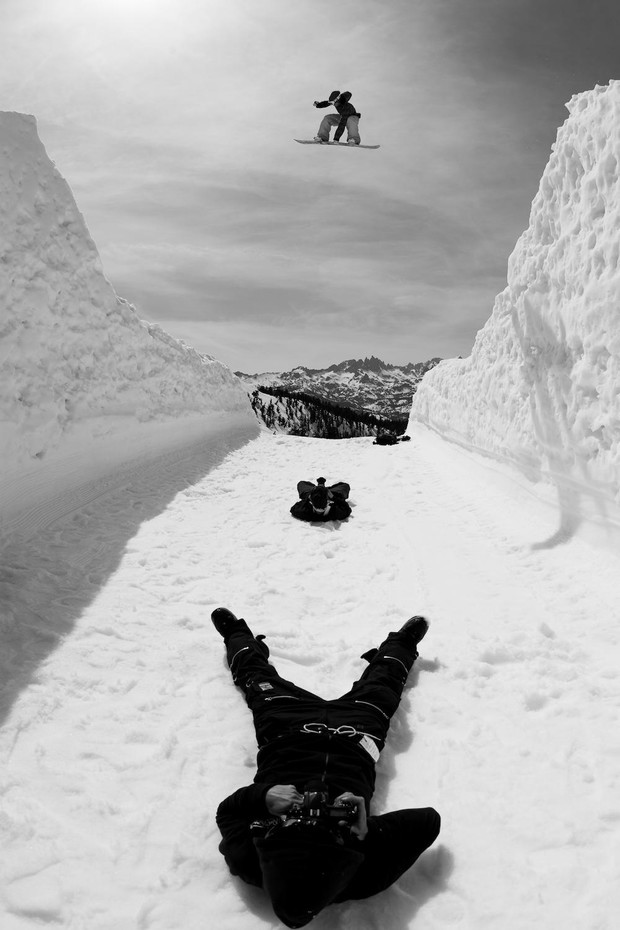 Natasza Zurek airs a gap during the shooting of Aeris. Adam Moran photo.

Honestly, the lead character, Terra, is a vehicle for many of the people that I’ve know through the years of snowboarding, men and women. I won’t name any names, but Terra’s broken home life is representative of some snowboarders I knew.

How reckless she snowboards (she is not conservatives at competitions) was inspired by other riders. She rides very differently than other more “professional riders” who have less talent, but compete with more strategy. Before Terra gets sponsors, she has to work to support herself and her developing career. This grit is also taken from many young professionals I knew, including myself.

I had not expected to see the riders supporting each other so much. Like helping each other build confidence before hitting a crazy jump. And, helping the riders push on if they are falling a lot. This kind of social support doesn’t exist as much in men’s snowboarding. So, that kind of sisterhood made it’s way into the script after I did the Lady Shredders series.

The snowboard industry has a whole is still very male-dominated. Sponsors want men on their teams and don’t see women as progressing the sport as much. As a result, not many women can make a real career off snowboarding.

There is an association between snowboarding and rebellion, and your storyline seems to speak to that. Why is that an important storytelling element? 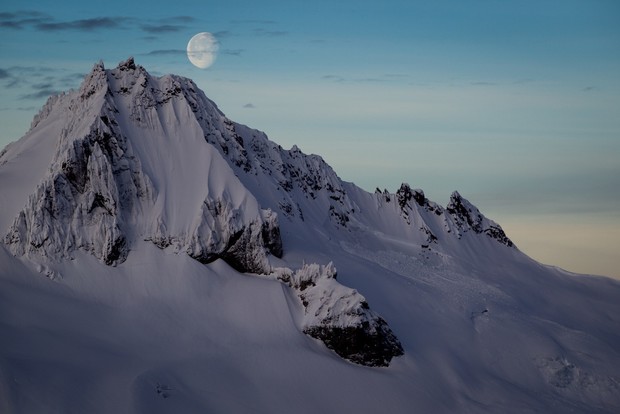 I grew up snowboarding in the late-80s and then the 90s. This was as time when snowboarding was still a counter culture sport. It was not in the Olympics. There was not big corporate money involved, and there were not many people doing it. The whole sport had a sense of “outsider” rebellion.

We were snowboarding because we loved the feeling to doing it. Nobody was making much money or getting famous, which can happen to many guy snowboarders now.

The thing that has drawn me to women’s snowboarding now is that they are much like I was in the 90s. Women’s snowboarding is still a fringe thing in the industry. Women aren’t making as much money and it’s not a sport that is very feminine.

The thing that has drawn me to women’s snowboarding now is that they are much like I was in the 90s. Women’s snowboarding is still a fringe thing in the industry. Women aren’t making as much money and it’s not a sport that is very feminine.

The rebellious themes that are in our story celebrate the personalities who go against social norms to “be a snowboarder” and then physically risk everything to snowboard. As for a story element, I am drawn to the humanity that is expressed through the rebellious nature of these female characters.

What makes their story interesting for me, and hopefully others, is that they are breaking the mold of what women are expected to do with their lives. Terra’s character chooses to live her life for a career that is physical dangerous and asks for her to be courageous in a way that’s not normally asked of women. Stories about people who break molds are important to tell, because ideally they inspire people to live more fulfilling lives of their own.

What is the trajectory for crowd-funding, filming, and releasing the film? 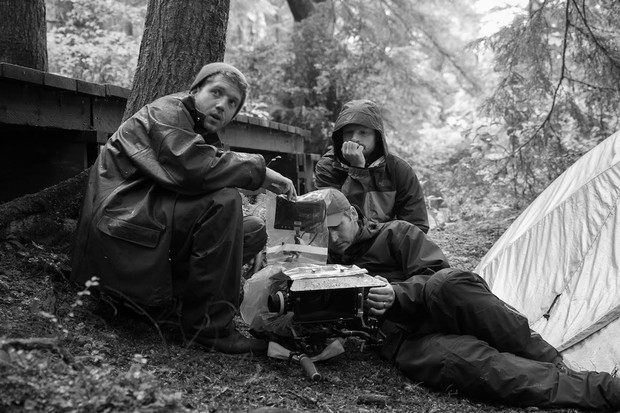 We are doing the short film first in order to show investors how amazing our character and this world are, so that we can raise the budget for the feature film. Even though this is an independent film, it will cost enough that we need professional film investors involved.

Additionally, a really great thing about the crowd-funding process is that we can be sharing the inspiring ideas of the story for a long period of time. We don’t have to wait until next year to unveil Terra’s inspiring qualities. Her story has already started taking on a life now, this is way before the actual film premiers.