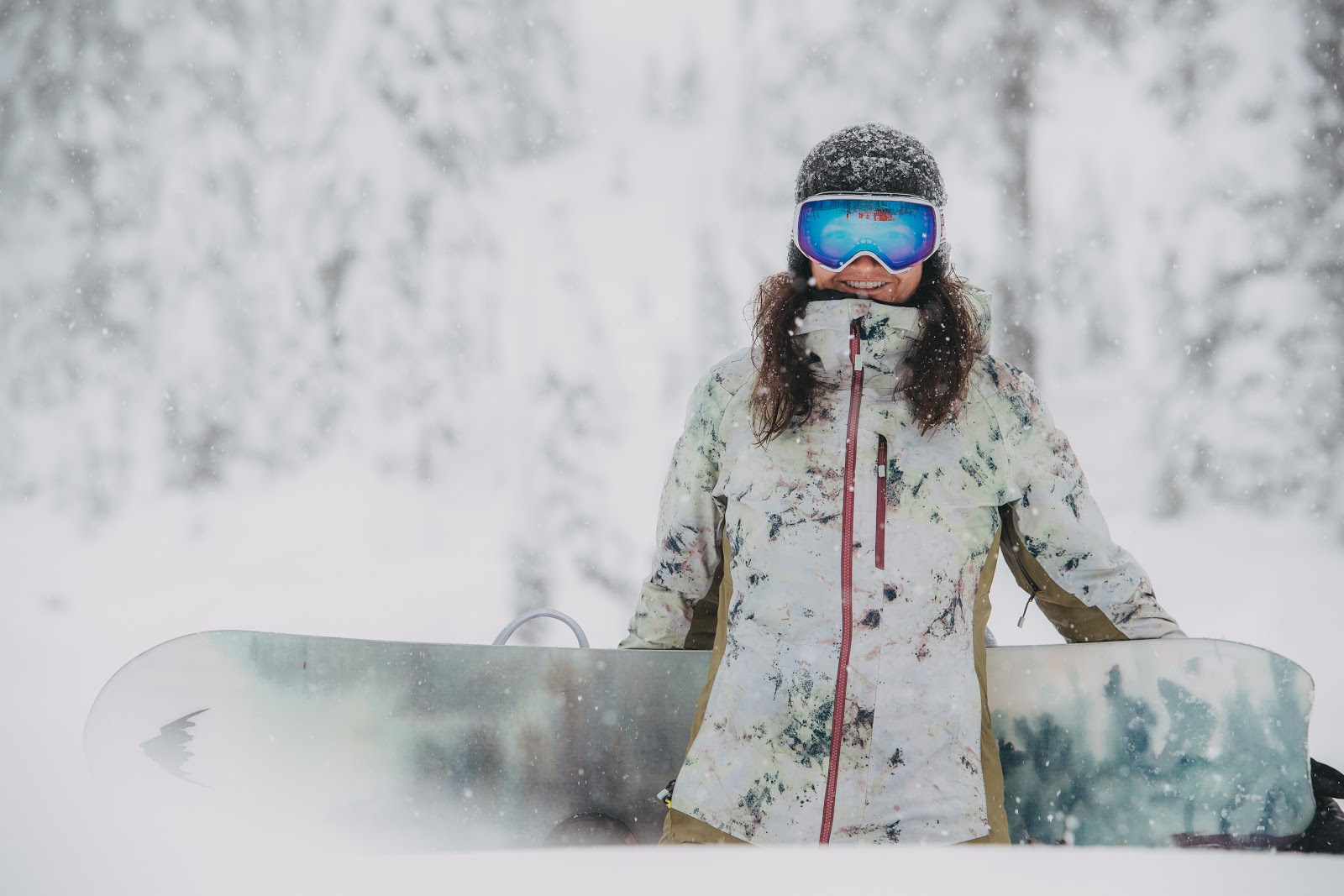 Clark has been a force at the Burton U.S. Open for the last 20 years. Burton Photo.

The sound of a loud drum reverberates throughout Vail’s halfpipe, except there’s no percussion ensemble here at the 37th Burton U.S. Open. Instead, the noise is being produced by the spectators lining the walls of the pipe as they bang the railing repeatedly with their hands. The second run of the Women’s Halfpipe finals is about to commence and the crowd couldn’t be more excited.

RELATED: Elena Hight — From the Podium to the High Sierra

Standing next to me are two girls, no older than 10, who are bubbling with enthusiasm. With the ultimate vantage point atop the pipe, they’re able to soak in the last hit of each competitors’ run. When Xuetong Cai styles a huge method in front of them, they squeal with excitement. Turning to their mother they point and shout, “that was so cool, did you see that?”

Showcasing incredible female riding has been one of the greatest contributions the Burton U.S. Open has given to the sport. Before she was a five-time Olympian, three-time Olympic medalist, and trailblazer for women’s snowboarding, Kelly Clark stood along these railings watching the halfpipe competition with reverence. She attended her first U.S. Open event in 1996, and she’ll never forget seeing her heroes on the main stage. It’s where she watched Nicola Thost throw back-to-back 720s, exemplifying the pinnacle of women’s snowboarding for the time.

Two decades and 20 U.S. Open competitions later, Clark has left an enduring mark on the event and in women’s snowboarding in general. Despite stepping away from the competition scene, Clark was just as present at this year’s event. You might have noticed her chasing after Maddie Mastro when they poached the men’s pipe event during intermission. In between all the madness, we caught up with Clark to learn more about the progression of female riding we’ve witnessed at the Burton U.S. Open for the past 37 years. Here’s what she had to say.

What’s your earliest memory of the Burton U.S. Open?

KC: My first memory was the level of progression that women’s snowboarding was at in ‘96. My first few opens I didn’t make it past pre-qualifiers to the main event. I think I made my first semi-finals in 1999—so twenty years ago.

What’s the biggest thing that’s changed since then?

KC: The size of the pipes. If you look at any archival footage the pipes range from six to 18 feet tall. Now they’re 22 feet.

Halfpipes from back in the day

What led to that increase in pipe size and how did that change the competition?

KC: It’s the sport progressing, and to be honest with the bigger transitions it’s a much a safer venue. In the ‘90s and early 2000s, halfpipe riders would blow their knees quite often because the margin of error was much smaller on a smaller transition. You don’t see that anymore, even though we’re carrying more speed it’s much safer.

Since you’re able to carry more speed we saw riders like Anne Molin Kongsgård really break a lot of barriers in the early 2000s because of that. She’s a Norwegian halfpipe rider, and she’s really the one who I emulated my snowboarding after. Her riding style paralleled a lot of male riders, which demonstrated to other female riders that they could ride like that too. She also opened the door by being the first woman to ever land a frontside 900 in the pipe, which was not in competition.

How did snowboarding progress from there?

KC: It just kept progressing. At that time around 2006, men were doing back to back 1080’s and that was the benchmark at the time. I became the first woman to land a 1080 in 2011, so you can see that women’s progression is just a few years behind men. But it’s important to note that we’re not riding a different halfpipe—we’re riding the same thing. There’s some biological and physical difference between men and women, but as far as technique-based sports, women can keep pace with the guys.

You know as we progress, men show us what the next step is and we try to chase that down.

It always takes that first person doing it for others to realize that it’s possible.

It’s like the four-minute mile. Everyone thought it was impossible, then one person does it and it becomes a reality.

When I landed a 1080 in 2011 I was thinking ‘in 2012 it’s going to be a normal’, but it really took until 2017 for it to become normal for women. A few girls learned it in 2016 but overall it was a good five years for the rest of the competition to gain that trick. It was a lot slower than I anticipated. Sorry, this is a lot more technical knowledge than you were expecting.

No that makes sense. Every sport is defined by these pivotal benchmarks—especially when it comes to these big tricks.

KC: Yeah, we saw how Elena Hight was the first woman to land a double in competition back in 2013. We haven’t seen another woman land a double until this spring. So it takes time and then it catches up. It’s definitely a tip of the iceberg thing.

Do you think as we're progressing, is the sport becoming more accessible to girls?

KC: I think the events play a big role in it. Competition is a chance to rise to the occasion and put your best snowboarding on display. Especially at these events like the U.S. Open or the X-Games which brings snowboarding to mainstream America. When people see it, it’s an invitation. That’s why Olympic snowboarding is a successful and growing sport because it’s something that’s relatable.

When people watch these events they see it and feel part of that community. That’s what increased participation and created access is putting our sport on display. Not everyone is hitting a 70-foot jump—but maybe they’re hitting a 10-foot jump. The sheer media aspect of it has done a lot to grow our sport.

What’s particularly special about the U.S. Open in your eyes?

KC: The U.S. Open has always put riders first in terms of prize money and they’ve created space for women since the beginning. It’s never been just a male competition, there’s always been equality since the first day 37 years ago.

I grew coming to the event as a spectator and got to see my heros—they’ve just done right by snowboarding. It’s never been a TV show or for something else. 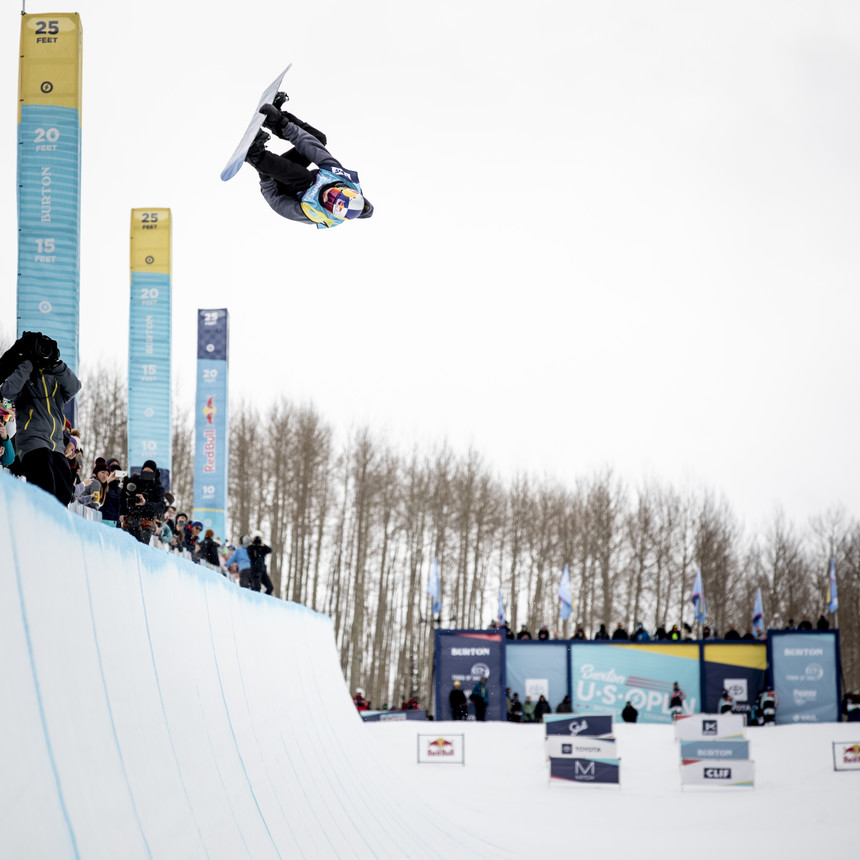 Maddie Mastro made history this year by landing the first ever double crippler in competition. Red Bull Photo.

What gets you excited about the next generation?

KC: I just stepped away from competition about a month ago after 20 years of competing and before I left I wanted to make sure that the core values were carried on and embodied by the next generation.

For example, I never wanted to be externally motivated even though I’ve done contests my entire life. A long time ago I changed my approach and started snowboarding so that I was doing the runs I would be proud of at the end of the day. Not because it was an X Games or BUSO final.

I was never one to take victory laps or waste a run because I always wanted to put the best possible run down when it counted. You see that mentality in Women’s Halfpipe snowboarding now.

For example, I was watching Chloe yesterday and she did two completely different runs to qualify—which both would have qualified first. She had no reason to do a second run, but she chose to because she wanted to push herself. Those are the things I’m excited about for the next generation. The riders are the ones influencing the sport and setting the pace. It’s not externally motivated, it’s internally dictated and driven.