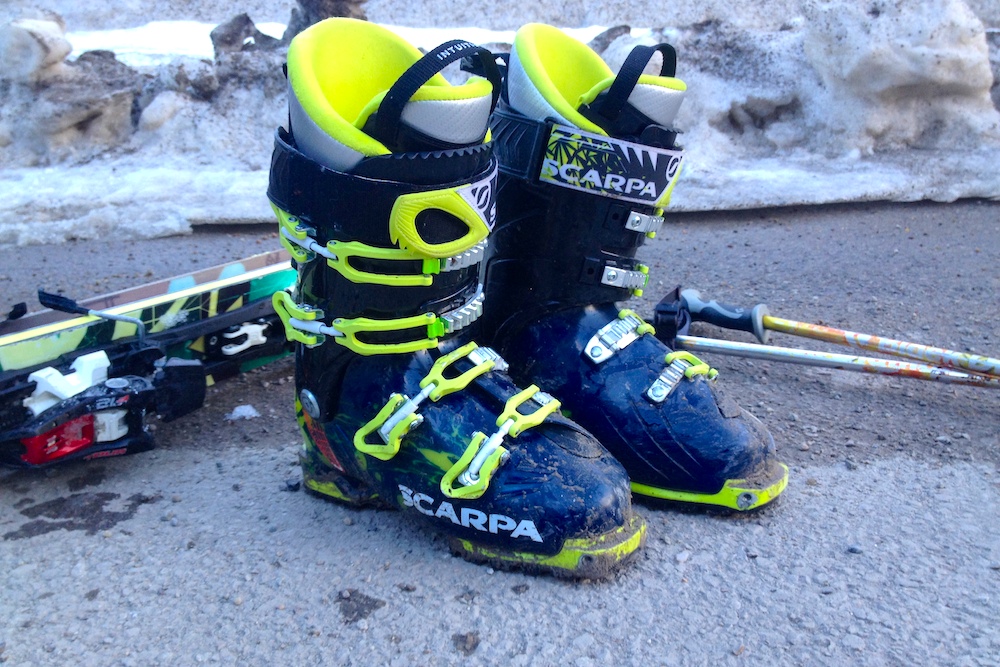 In the Gear Swap section of the TGR Forums, you can find virtually every piece of ski equipment in existence for sale, from random old race skis to $1300 carbon fiber spooned DPS powder skis someone used once on their heli ski trip to Alaska and are now selling for $800. But you cannot find a single pair of Scarpa Freedom SL ski boots for sale in there. It’s a testament to the success of Scarpa’s completely overhauled everday/touring boot, which they launched last fall with the guidance and input of the venerable Chris Davenport.

The Freedom replaced Scarpa’s Mobe, Typhoon, and Hurricane boots, which we’ve also reviewed and found to ski well, and produced a much more high-performing and highly-refined product than those familiar with the brand were used to seeing. Scarpa positioned this boot as their rowdiest “freeride” model, primed for downhill skiing in-bounds and out, and able to pop into both DIN and tech bindings with equal ease and performance and able to tour well and only slightly less so than the more touring-specific Maestrale RS.

Over the course of the second half of last season, I completely fell in love with this boot, and rarely bothered to take out my normal in-bounds boot, the Lange RX 130, after dialing in the Freedom.

It's All In The Details 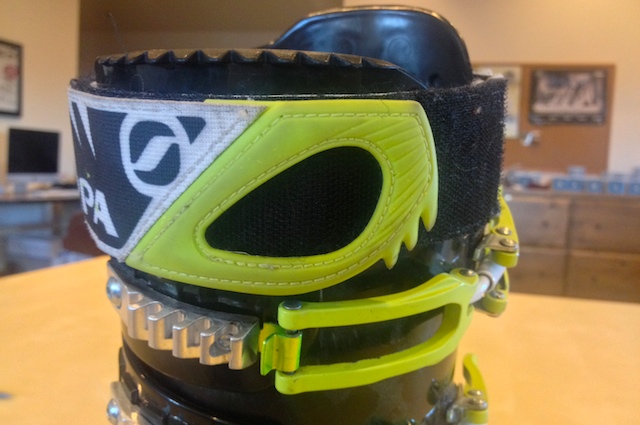 Looks a little weird, but the end of the Freedom's power strap has both a glove-friendly pull tab and an ingenuous serrated edge to chip ice and snow out of the Power Block walk mechanism.

At first glance, what hits you with the Freedom SL, beyond the high contrast of the dark blue shell and the neon green buckles and details, is the attention to detail Scarpa’s European engineers adorned these boots with. The oversize and and supportive power strap has a big hole at the end for grabbing at it with gloved fingers, and a hard ridged edge for chipping snow out of the walk mode lever on the rare occasion snow got stuffed up in there. A windshield-wiper style rubber barrier keeps snow from entering the lower shell of the boot–something that Lange, mystifiyingly, has never figured to include in their overlap shell design, which is why almost every pair of Langes you see on the slopes are adorned with a strip of duct tape over the front of the overlap. There’s even a small tab on the foot board of the Freedoms so you can more easily pull the boot board out of the shell. The Scarpa-modified Intuition Pro Tongue liner has a superbly catch-free liner material, making these boots a cynch to get on. The swappable Vibram soles also screw directly into the Carbon Core frame that’s molded into the footboard of the shell, making for far greater energy transfer than other touring boots with swappable soles. 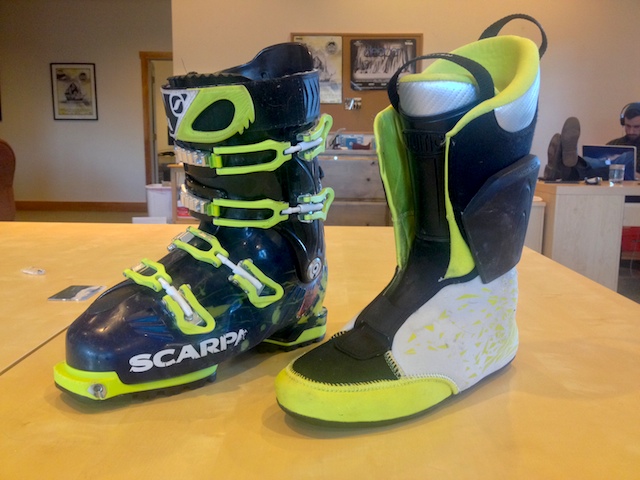 The Freedom SL shell and Scarpa-customized Intution Pro Tongue liner. I velcroed the forward lean wedge from my Langes to the side of the liner to account for my bow legs.

As far as other tech details go, the liners also have a plastic shell sewn into the front of the shin tongue, which stiffens it up. Advertised weight for my size 27, 304mm BSL Freedom SL, which contains Scarpa’s lighter and more eco-friendly Pebax shell material, was around 1800 grams, although contributor Lee Lau, who also spent time in this boot and wrote his own review, found it to be more exactly 1888 grams. The rockered Vibram soles come with some excellent grip and even with the tech fittings installed, had no problem fitting in the Marker Tour F12 bindings I skied with these. Scarpa’s Carbon Core frame, mentioned above, is a stout piece of carbon fiber in the boot board that the rest of the Pebax shell is actually molded around. This stiffens the foot and improves the power transfer to the ski, and I noticed it. With the swappable soles screwing directly into the Carbon Core, instead of the plastic boot shell, stiffness, both generally and laterally, is topped off as well. 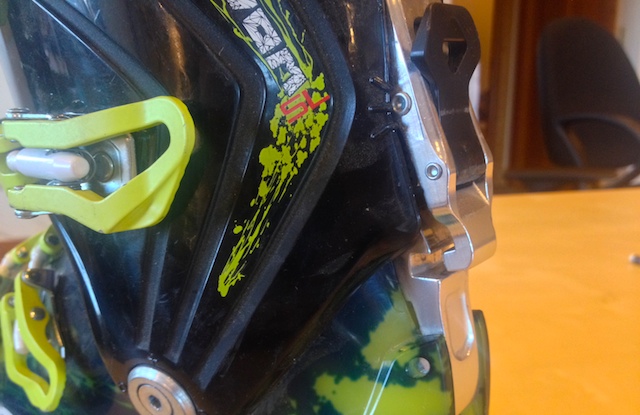 The Power Block walk mechanism–super burly when engaged, but catch-free when released for walking.

The other big news with the Freedom was the Power Block walk mode lever, which uses thick pieces of metal that lock down in ski mode to provide a stout platform, but which disengage completely from each other for hiking and touring. This means the upper and lower cuffs of the boot are free to rotate with much less friction that if there were a sliding lever like in Scarpa’s Hurricane Pro or Maestrale RS. While the Freedom offers a 27 degree range of motion for touring compared to the Maestrale’s 40, the free-flexing nature of the boot in walk mode made it a superbly good tourer.

Scarpa’s boots are known to be generally spacious, and the Freedom has a solid amount of room over the instep for pronounced arches. The forefoot volume is on the low to medium side, and with an uncooked liner, I found a snug fit in the toes that I value almost over any other aspect of boot fit. With a 101 mm last, they’re in the middle of possible lasts, but really in the sweet spot for my foot. The adjustability of the upper calf buckles should accommodate those with meaty calves as well as peg legs. 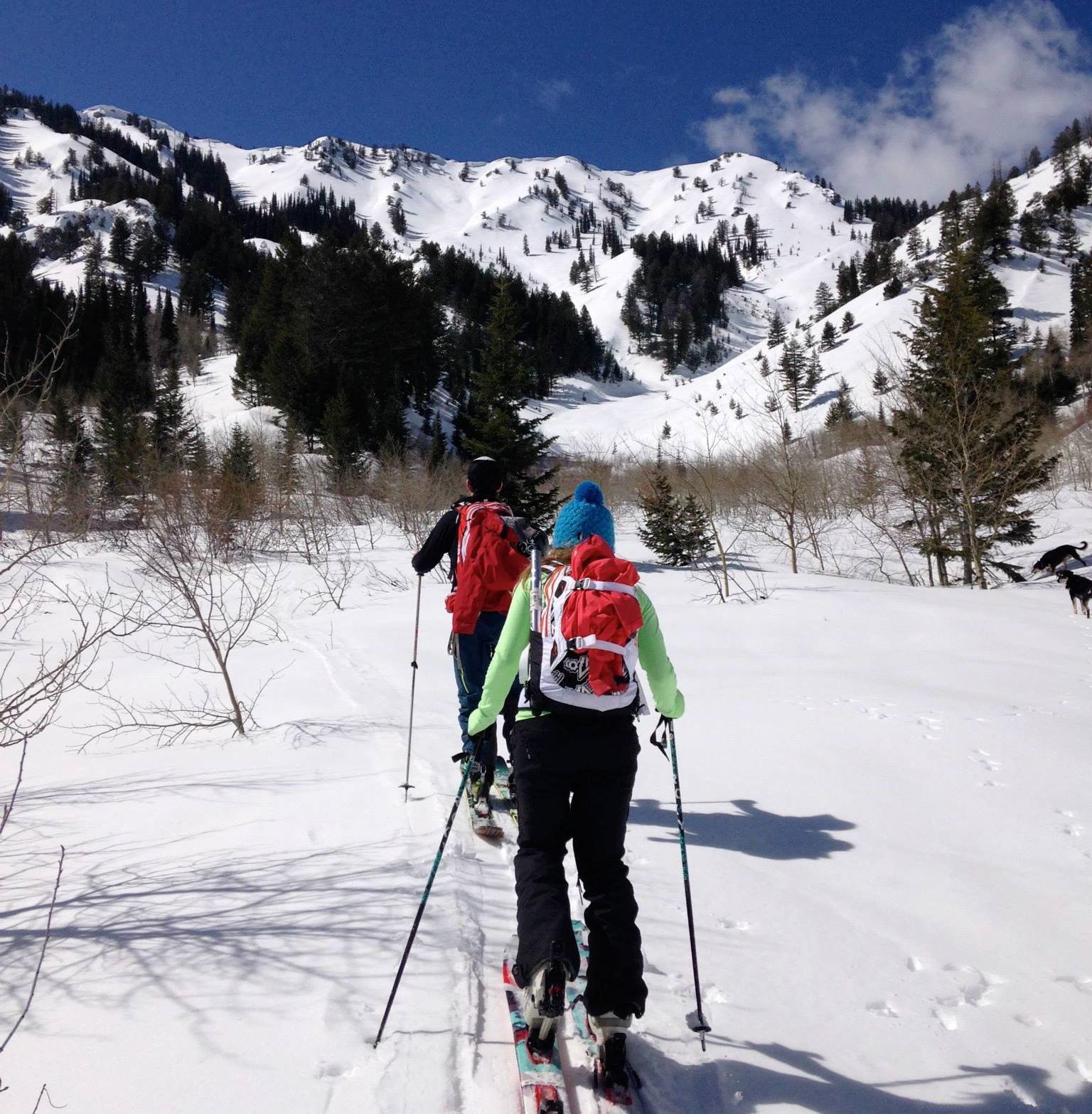 Out for a walk in Idaho's Big Holes in the Freedom SLs (I'm in front). Maggie Zock photo.

I put the Freedom SL to use as my touring boot to start, and quickly fell in with its smooth functionality on the ups. Touring on Marker Tour F12s and a pair of Moment Deathwishes isn’t the lightest setup out there by far, and the Freedom SL is not the absolute lightest option out there itself; the Maestrale RS, Scarpa’s highest-performance touring-specific model, comes in at closer to 1500 grams, and the Dynafit Vulcans weigh similarly.

Both of those options provide technically larger ranges of motion for touring, but the Freedom’s Power Block provides extremely low-friction movement, and if you completely unbuckle the top buckle, you gain even a bit more range of forward motion, and having a significant amount more range of motion going backwards would only seem to help on extended flats. Most of my touring involves 2-3 hour outings off Teton Pass before or after work, going directly up or down the majority of the time, and with this routine the Freedoms toured beautifully, felt sufficiently light, and had plenty of range of motion.

Scarpa’s generally roomy fit and 101mm last made for a high degree of comfort while touring, and there never seemed to be any pressure points or chafing issues. I never molded the custom Scarpa Intuition liner, but as a supreme Intuition fanboy, was again pleased to be reunited with their slipper-like comfort, warmth, and rigidity.

With the Power Block locked up, Powerstrap ripped down, and the four big buckles all snapped close, the Freedom SL proved itself as an incredibly nimble, energetic, and responsive boot. At first I had the forward lean adjusted all the way forward, but after time found that wasn’t necessary to drive the ski, and rolled them back to the more neutral 14 degree lean and stayed centered on my Deathwishes (which is how that ski likes to be skied anyways). While not the stiffest boot out there–the Vulcans are probably a better all-round & touring option for skiers who truly wish they were in race plug boots–the Freedoms were plenty stout for my 160 pounds, had a smooth, progressive forward flex, and quite possibly the best lateral response of any boot I’ve spent time in. Coming from the thick, heavy Lange RX 130s, which were great at driving skis through chunder, the Freedoms felt more responsive. Again, laterally, the boots seemed to store the energy you’d throw into turns and spring out the other side. And while the Freedom has a good amount of room over the instep for arches, the mid to low-volume forefoot and toebox kept my toes in place and driving the ski, instead of swimming around. Some may need to mold the liner or punch out the shell to accommodate their toes, but I enjoyed the combo of a generally roomy fit with a more snug area up front. 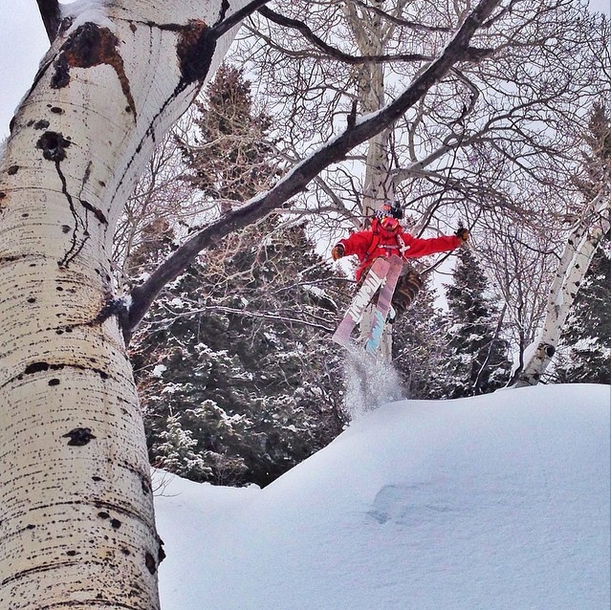 I really appreciated the relatively high calf of the Freedoms, which increased its response more than a shorter touring boot might, and the response you could feel through your feet–thanks in part to the Carbon Core and the fact that the soles mount directly into it–was amazing. Pure and simple, I’d never felt as connected to snow as I did when I started skiing around in these Scarpas. I eventually hung up my Langes for the rest of the season, and did all of my skiing, even in the terrain park, in the Freedoms. 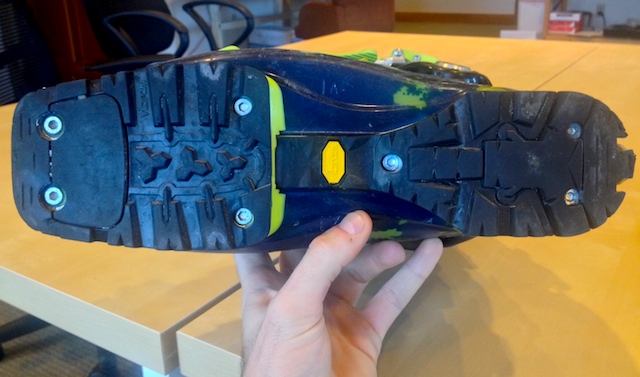 The rockered Vibram soles of the Freedoms had awesome grip for rock scrambling and bootpacks,and succumbed to only minor wear and tear on the heel.

A full season was put in on these boots between myself and Lee Lau out in British Columbia, and the most wear and tear these took was on the back of the heels, where the Vibram rubber was beginning to get eaten away by walking through parking lots. But aside from nominal cosmetic scuffs, there was little to suggest the boots were getting worn down. With replaceable soles, there’s not the worry of kicking these boots to the curb once parking lots grind down the toe piece. The Intuition liners were hardly showing signs of becoming packed out, although it should be noted the majority of skiing this boot saw was mellow powder touring–not the in-bounds mogul slamming that usually packs out boot liners. 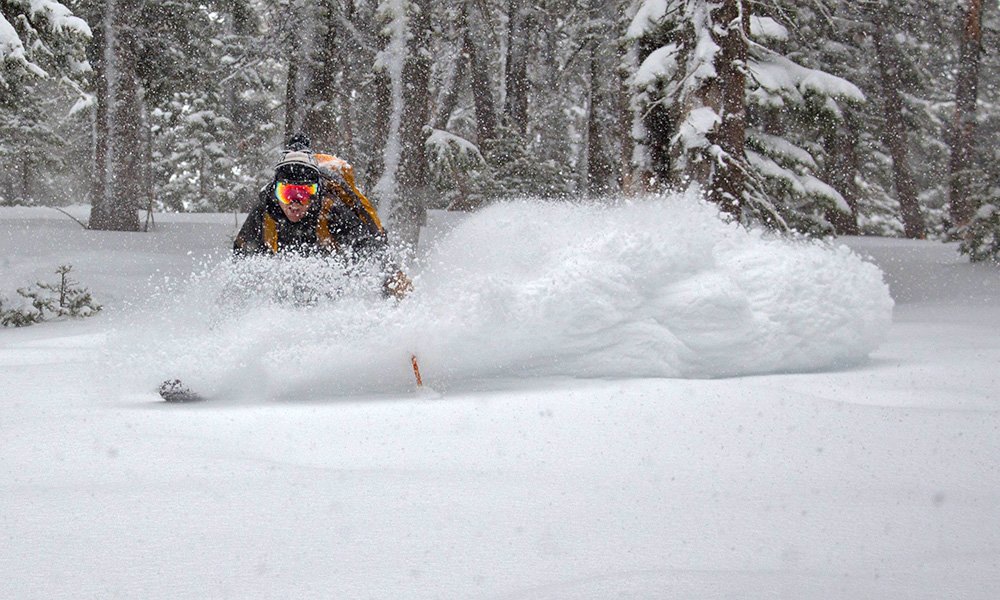 It was hard not to be smiling last season in the Tetons, especially in February (above), but the Freedom SLs only added to the overall glee factor. Wes Van Duser photo.

I hate to overhype any product–especially ski boots, where fit is so key to how well you get along with them–but I have to say that Scarpa really hit it out of the park with the Freedom SL. They are lighter and stiffer options, but for people who aren’t Erik Hjorliefsen or going for multi-day tours every week, the Freedoms are a superb quiver-killer boot that has an ingenuous design for making your uphill treks silky smooth and an incredible degree of response to help you ski better on the down while transferring more of your energy and input into the ski. I skied the Hurricane Pros for touring previously–there’s a review about them here–and while they skied and toured decently while remaining stiff, the Freedom makes them look clunky, poorly designed and not nearly as user friendly. They’re a quantum leap forward for Scarpa, and I have to commend the Euros for finishing off a great package with a ton of well-thought out detail, like the power strap that turns into a snow scraper and the rubber seal on the forefront of the boot that keeps snow out. Reviews for this boot would have been 99% as positive without them, so it’s nice to see that extra touch put in.

With a retail price of $769 on evo.com, these are still plenty of an investment, but compared to the Vulcan at a full grand, they strike me as more of a deal, especially considering their potential to replace both your alpine and touring boots in one swoop.

For more user reviews of the Freedom SL, check out their dedicated thread in the TGR Forums. We're also running a contest until November 11th in which you can win a brand-new pair of Freedom SLs, so be sure to enter now!