Mornings are not my thing, but a crystal clear morning before a day of skiing is almost bearable. This day in particular was four days after the extraction of all four of my wisdom teeth. Before getting in the car to head off on our mountain adventure, I took an oxycodone to numb the pain in my jaw. Very bad idea. 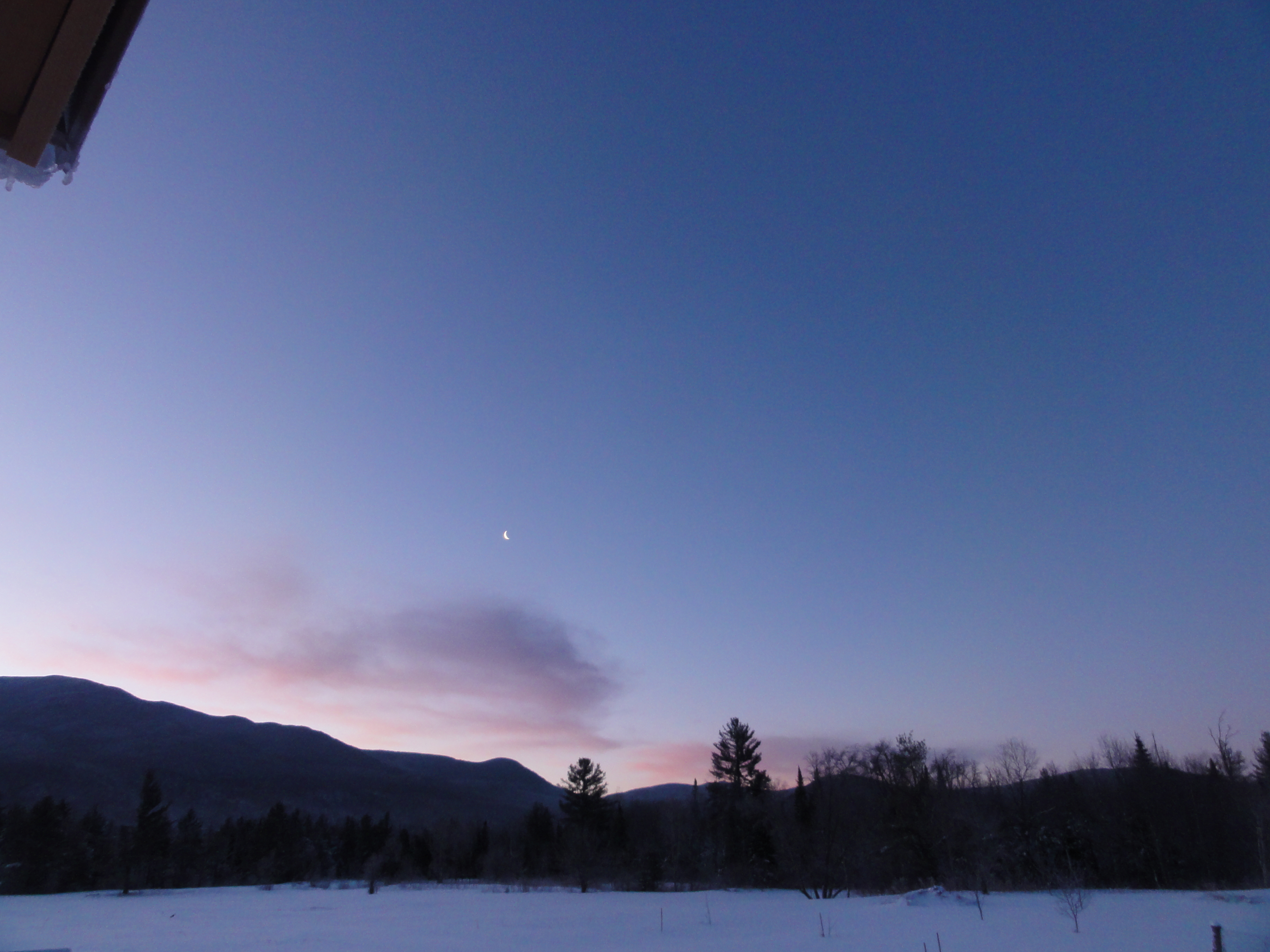 From the parking lot, and started up the hiking trail. There was a little surface hoar as the elevation got a little higher, slight but enough to make the snow glisten in the sun. After following the trail for a while we were still in the trees, but as we gained altitude I could feel the air getting colder. 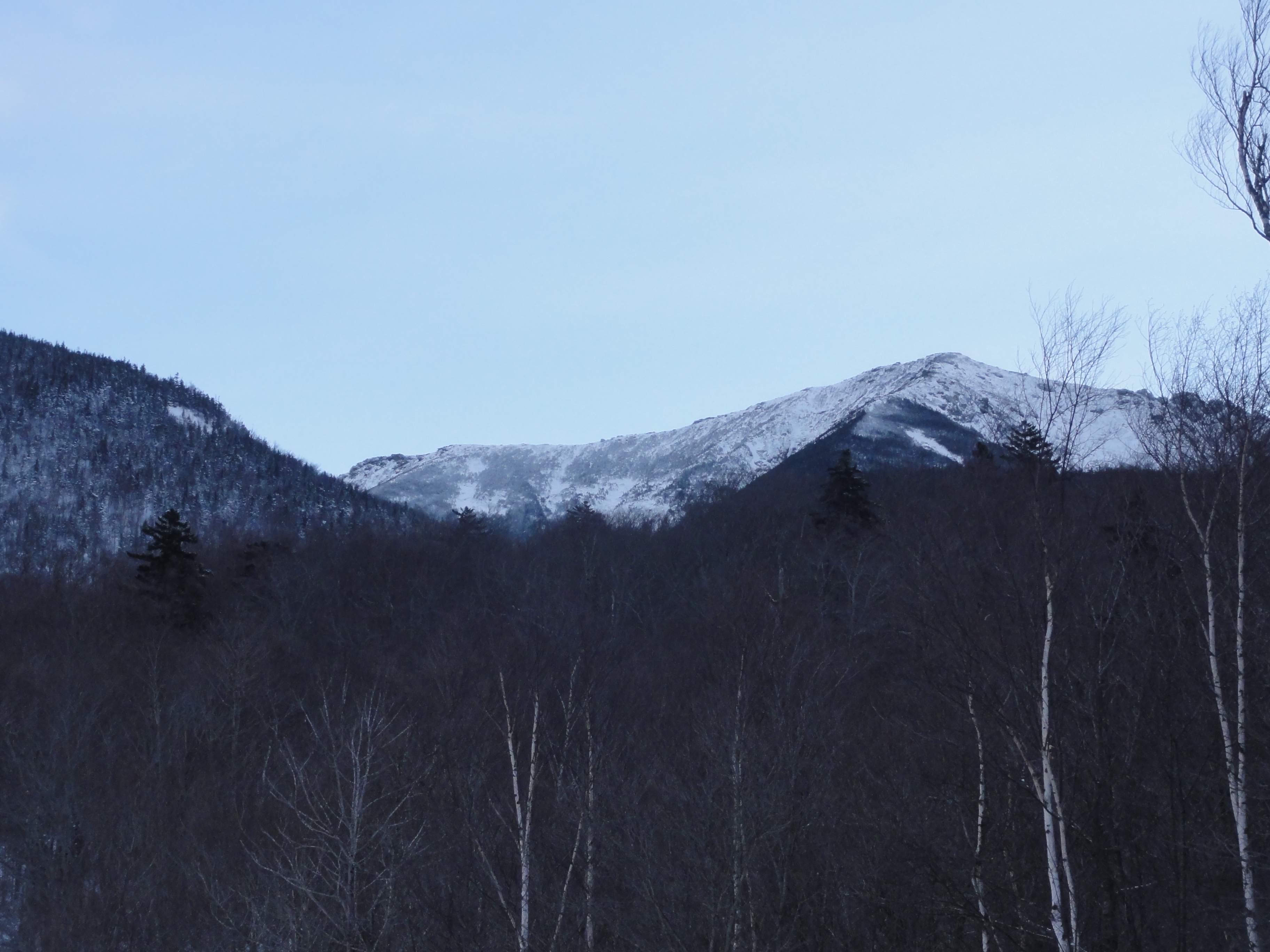 We paused and decided to find an open place to break through the woods and descend into the stream bed we were aiming for. After bushwhacking down through thick spruce and fir trees, we arrived in the stream bed. 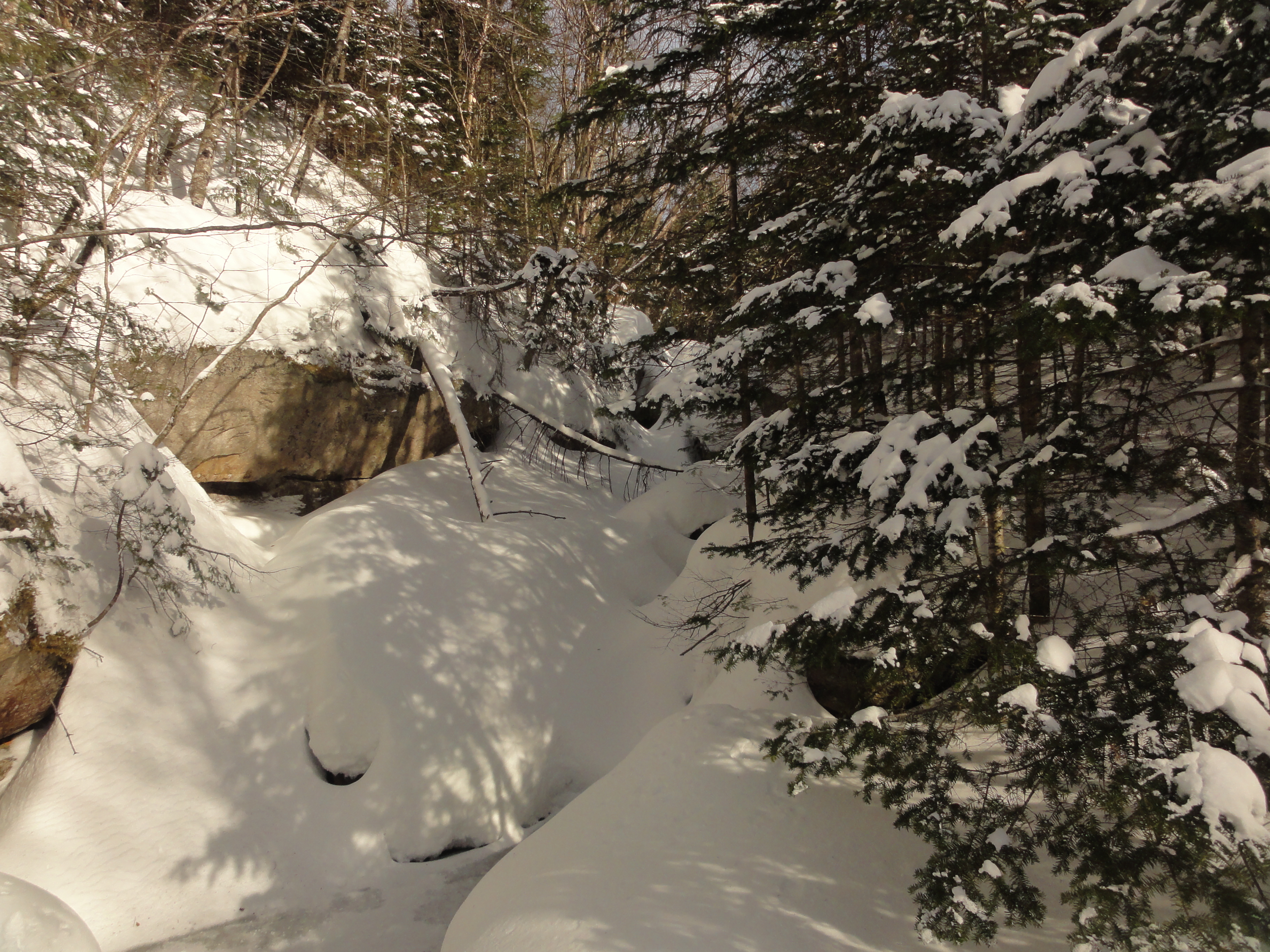 Left hand fork of the stream

After weighing the options, the choice was made to head to the right up towards Lincoln's Throat, instead of hiking through the sketchy left hand fork of the stream bed. The trail was mellow and wide open. Occasionally my snowshoe would punch through the snow over the river (I'm not really a fan of walking: an AT setup is definitely on the top of my list for next season). 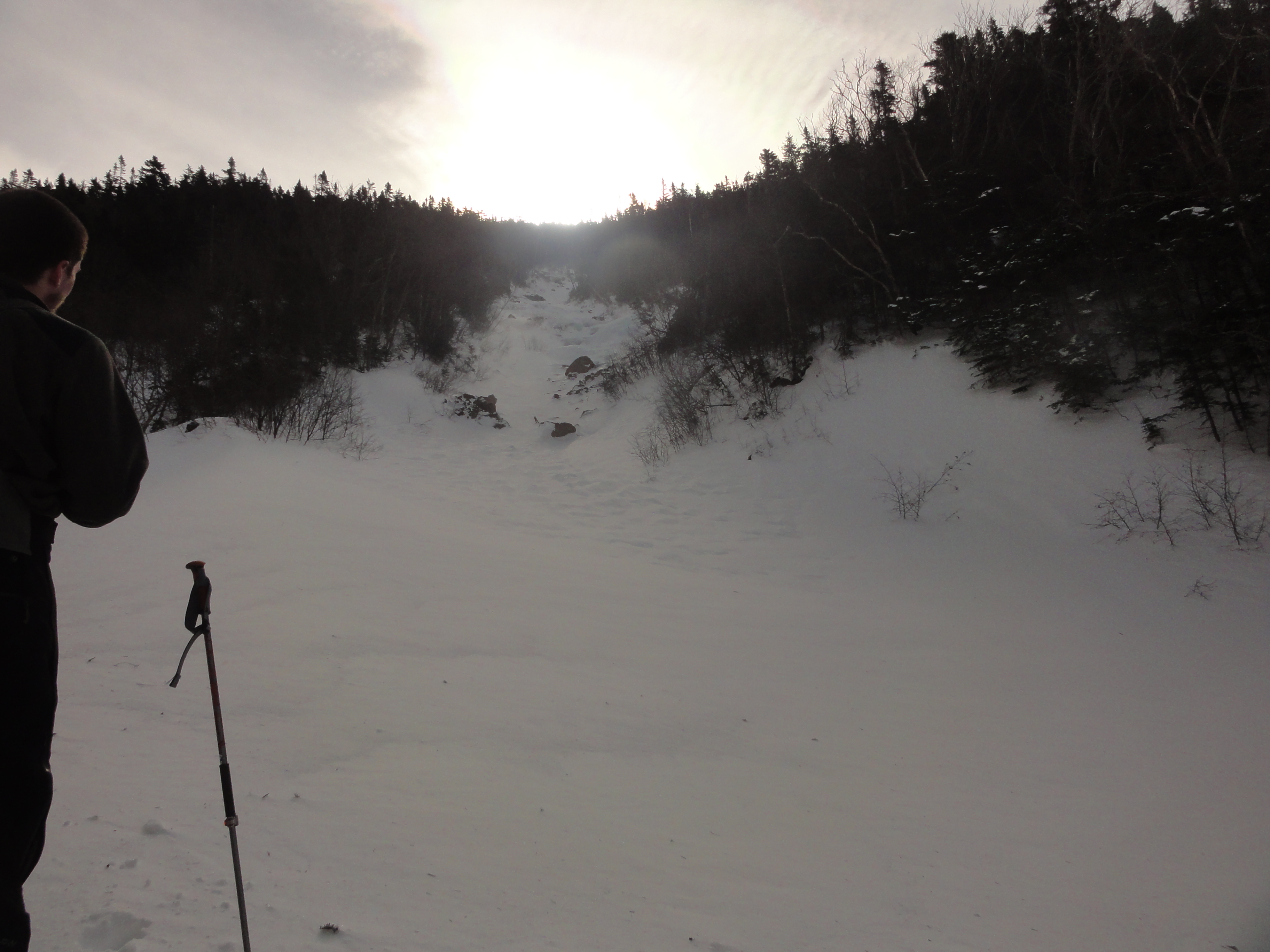 We continue up as the river turned into a deeper gully. On the trail we met some other hikers aiming for the Throat, including two of our teachers skinning up. By this time I was lagging: I felt much more fatigued than I had ever felt while hiking. I had no pain in my jaw, but lifting my feet and hiking through the snow was becoming increasingly difficult. We veered left up a fairly wide gully off of the main trail to avoid not only the groups ahead of us headed for the Throat, but also the longer hike. I regretted how slow I was being: it was undoubtedly the strong painkillers making the hike so unusually difficult. I even considered calling it, and just going down. But I had hiked this far and I was alert and conscious: it would be a shame to end the trip for both of us. 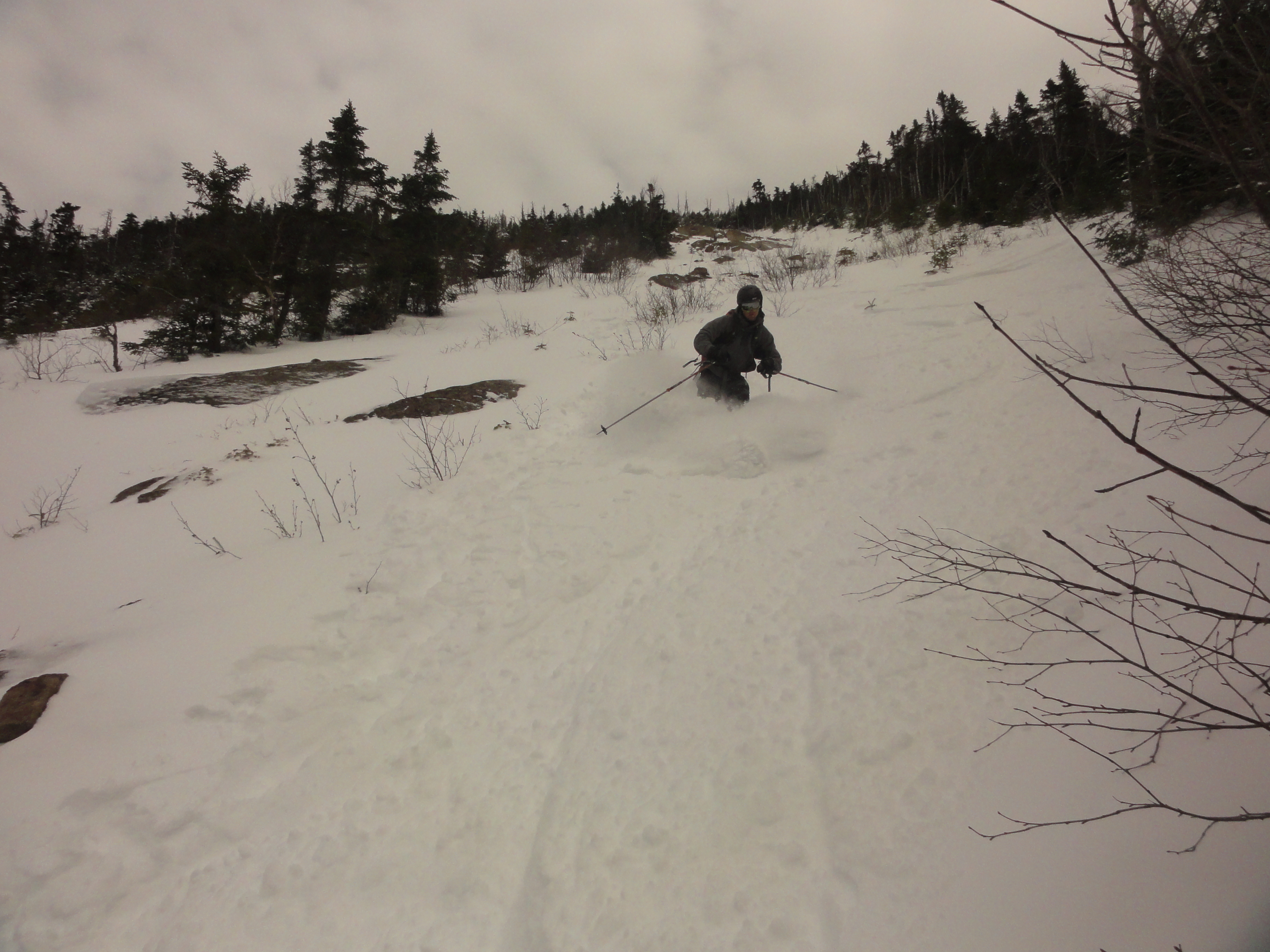 The upper section of the line we skied

We stopped short of the top; there was more snow higher up as it narrowed, and the avalanche danger was not worth the risk. I tucked myself safely into the trees on the side of the trail as Dodge skied down by me, The turns back down to the main gully was great. Six inches of fresh snow made the descent soft, while a solid base lowered avalanche danger. I've been able to feel my technique get a little better over the season, and today my turns felt more controlled and well executed than usual. 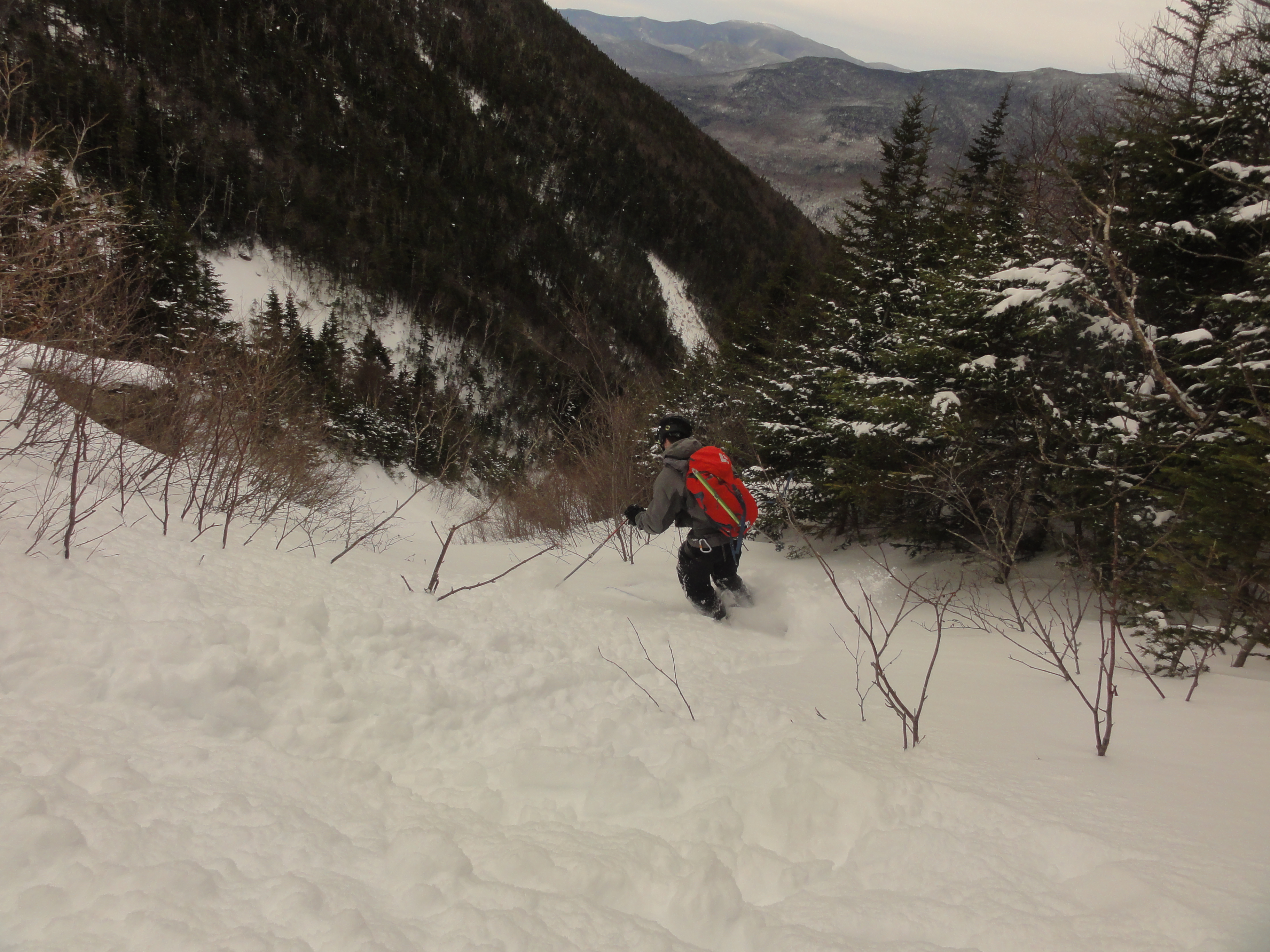 Our detour led us back down to the main stream. We cruised along, avoiding washed up trees, rocks, and openings in the snow over the brook. Instead of ascending up through the steep spruce bushwhack, we cruised through the trees next to the stream. At one point we sidestepped up a short, steep section, then dodged the maple and beech trees saplings that made up the forest. My legs were burning, and it was a relief to break out onto the trail. After following the trail back down to the parking lot, it was a relief for my fatigued legs to sit down. I was frustrated that the hike had been such a struggle, but I was happy that I had stuck with it and finished the day.