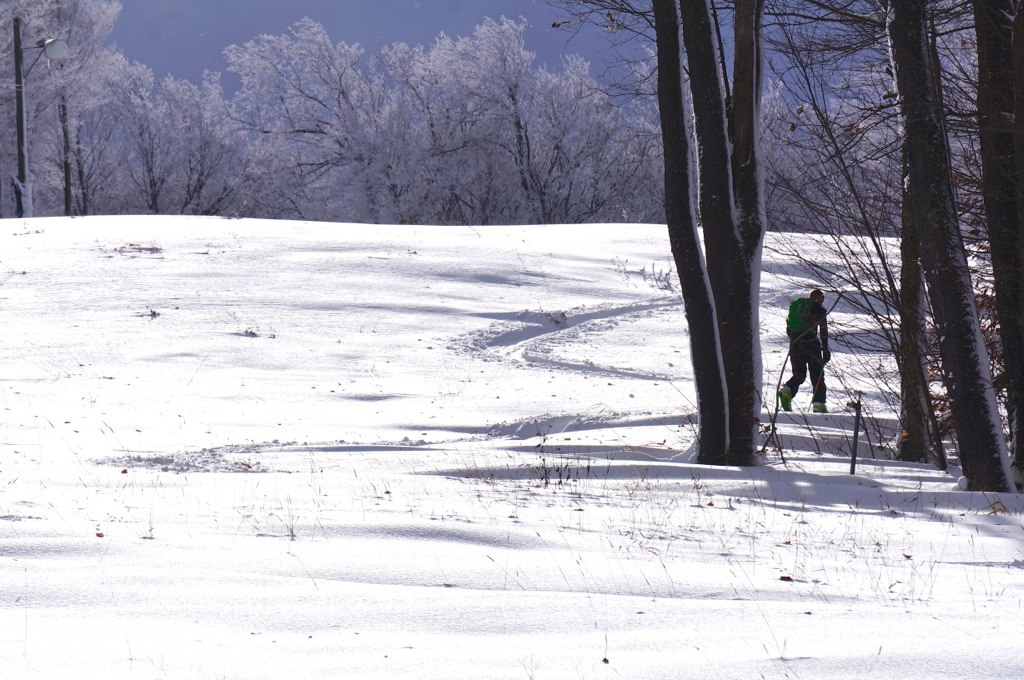 By Andrew Orowitz and Dalton Harben

It’s no secret that the mid-Atlantic region is home to some of the highest elevation peaks east of the Mississippi. But as backcountry skiers based in the Northern Greens, the thought of skiing south of the Mason-Dixon line had never really been a high priority. That all changed when Hurricane Sandy wreaked havoc on the eastern seaboard – and set up the high plateaus of West Virginia with some of the best early-season powder conditions in the country. 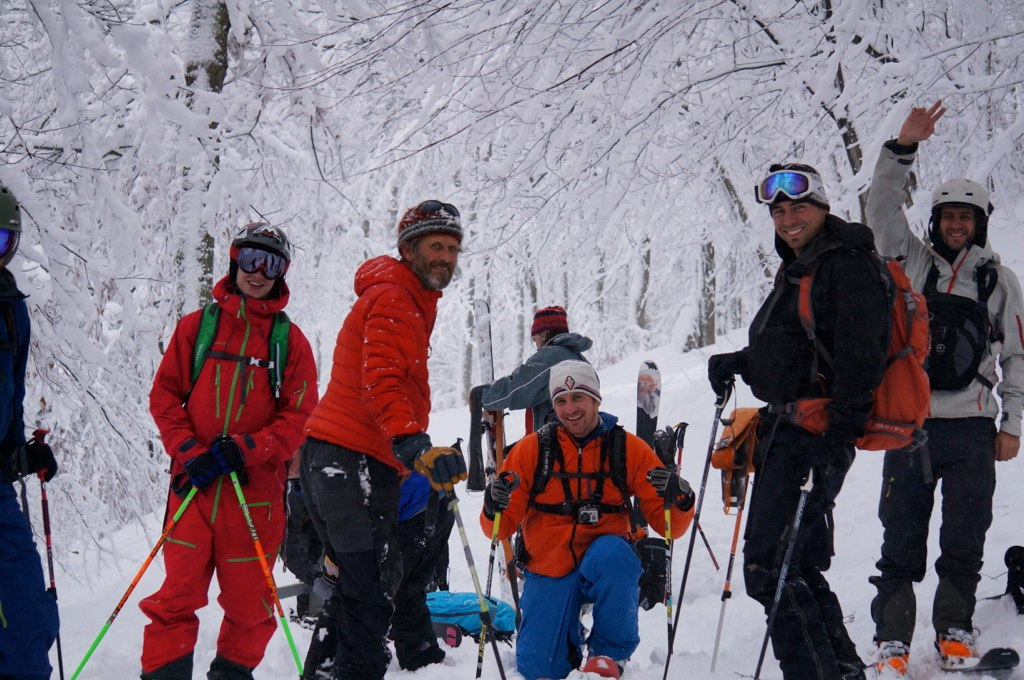 Even if it was 45 degrees and raining in Vermont, it was completely ridiculous to even consider driving 24 hours for 24 hours of human-powered storm of skiing in the mid-Atlantic Appalachians. Or was it?

Almost instinctively, negotiations were made with loved ones, personal days were requested of bosses, and skins, long underwear and goggles made their way into backpacks. Our unlikely Snovember adventure was actually coming together. At around 9 p.m., we began our 12-hour journey through the Halloween night to ski hillbilly powder upon arrival in the morning. What had started as a joke the day before had suddenly become very real. With the Tundra fully-loaded, we hightailed it out of VT and down the New York Thruway to meet our friend and fellow storm chaser, Matt Cote, at the Kingston, New York Park & Ride. 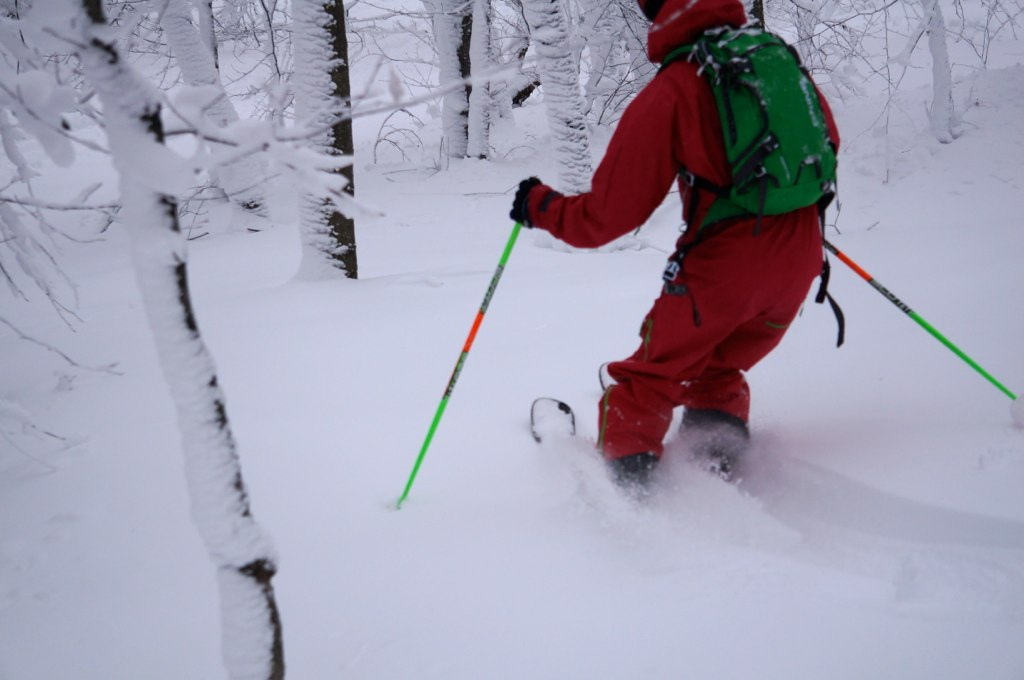 Reports of icy roads, widespread power outages and gas shortages continued to stream in from the Canaan Valley. But as far as we were concerned, it was ski season, we were storm chasing and all was right in the world. Buoyed by yet another cup of coffee, the morning light and the thought of skiing powder after the endless off-season, Matt C. took over the driving near the West Virginia border and the truck began it’s steady ascent to an elevation of around 3,000 feet. 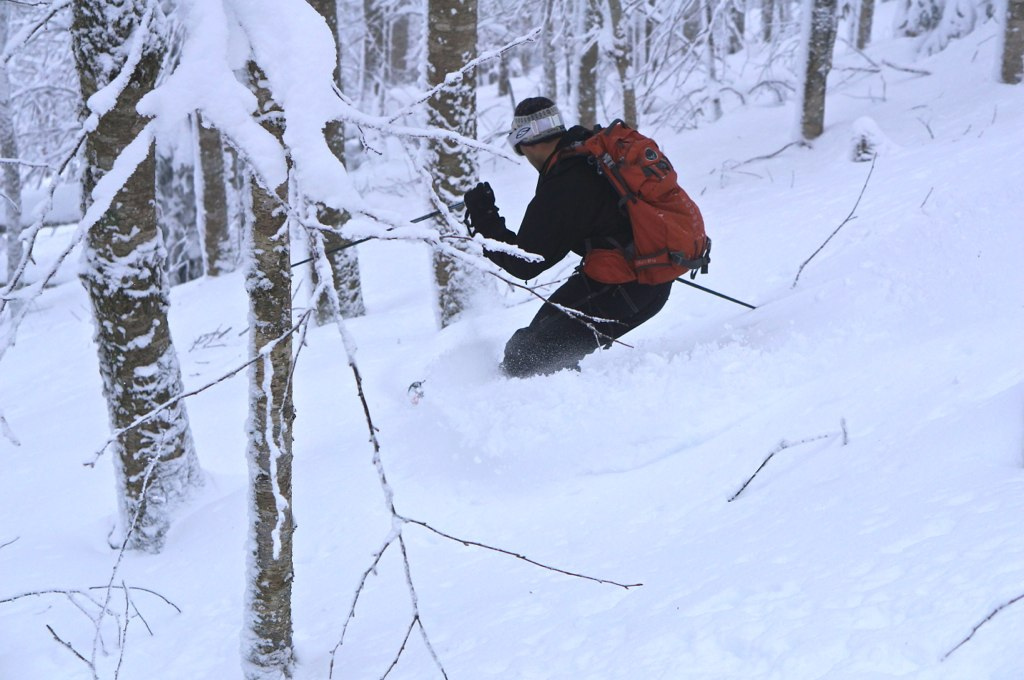 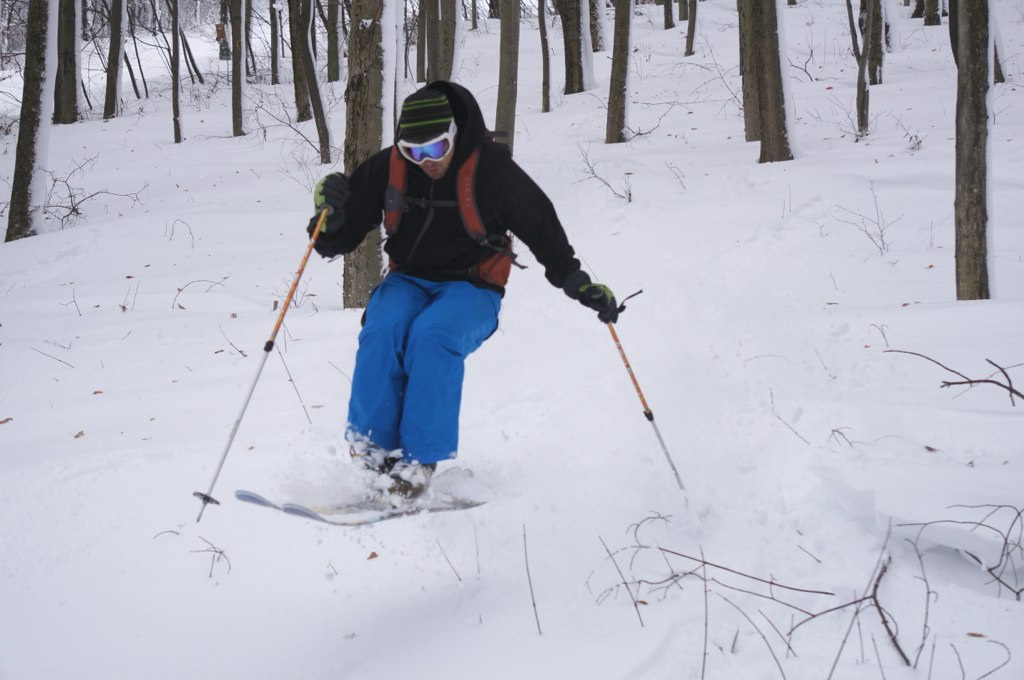 We hurried along to our first objective: the White Grass Touring Center, just a few miles down the road from our accommodations. Right away, Chip, the ski area’s beloved and bearded manager, invited us into the rustic base lodge to warm up by the woodstove and get ready for the ski. From the “donations only today” note on the ticket booth window, to the dogs and kids running around, to the timeless feel of the well-worn hut, it was clear that what White Grass lacked in vertical, it completely made up for with a pure, unadulterated love of skiing. 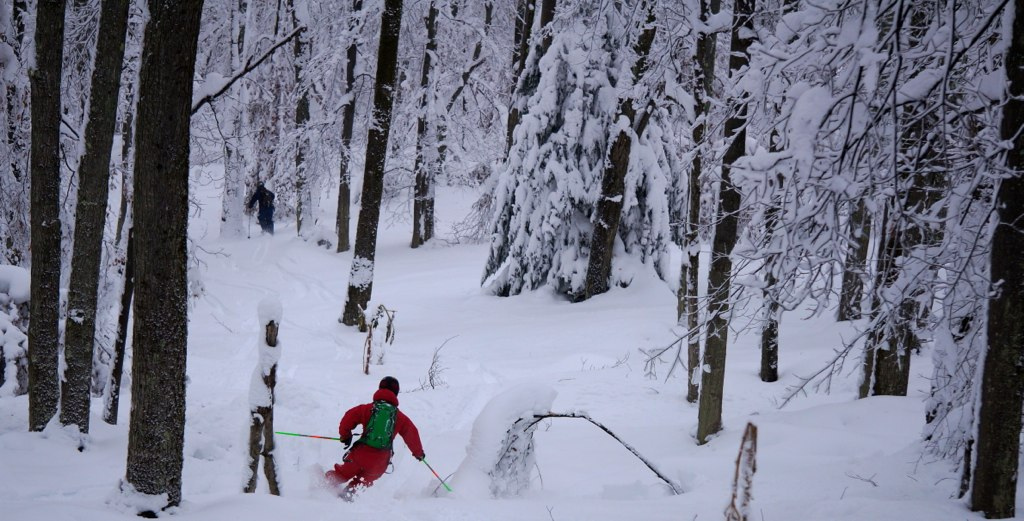 Maintaining a unique yet familiar mountain vibe, White Grass attracts a certain type of BC skier, one that longs for the serenity of an untracked glade and the company of a few close friends. After just a few minutes in the lodge, White Grass had already left an impression on us. A former Vermont resident himself, Chipper (as he is affectionately known,) explained that to him, the Canaan Valley represents “Vermont South.” Sharing a love of mountains, a laid-back lifestyle and a passion for skiing, it’s easy to see why. He was eager to get out on the local terrain and the fresh snow, and after all night driving in the truck, we were all more than ready to finally get out on the skin track. After a few quick laps, our group of nearly a dozen broke off into smaller groups and began exploring the various tree lines, backcountry huts and open meadows. 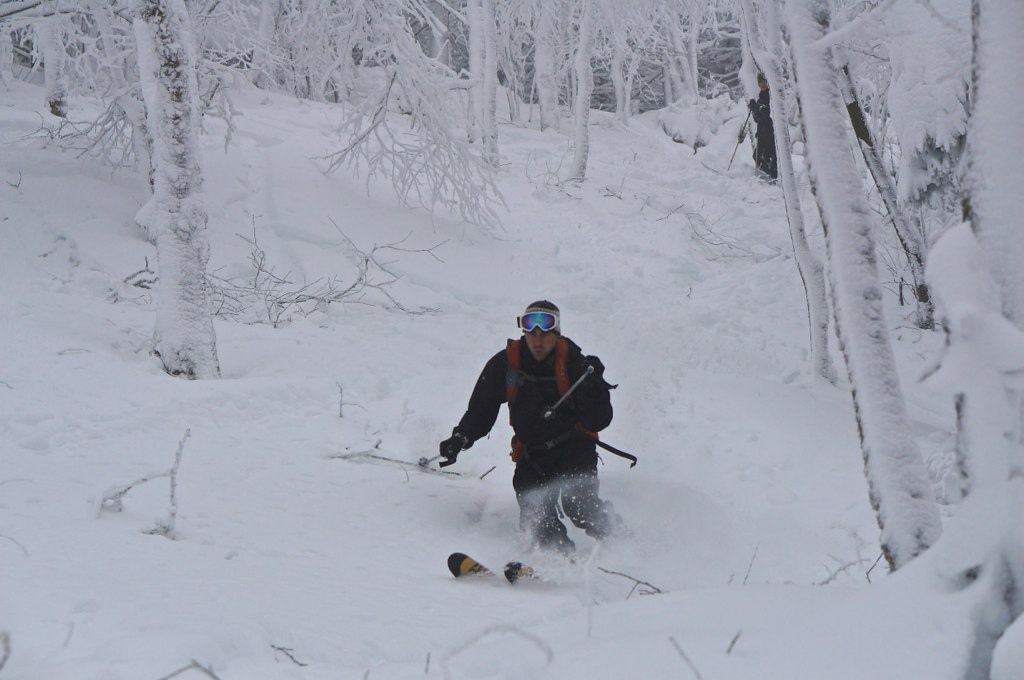 Deprived of sleep and with a few thousand feet of vertical under our belts, one way or another, we all made it back to the White Grass base area. While the region was still without power, we warmed ourselves from the inside with a jar of moonshine that was making the rounds. Before long we got word from Chip that we had been “evacuated” from our hotel. Luck had been on our side up to this point, and I wondered to myself whether the three of us would be sleeping in the back of the Tundra instead of our well-appointed hotel room. When we arrived back at the front desk we were informed that due to the heavy moisture content of the snow, they were concerned the hotel roof could collapse. Fortunately, they moved our group to a 4-bedroom cabin complete with a fireplace (for the same $10 a night fee.) I guess this is what they mean by southern hospitality. 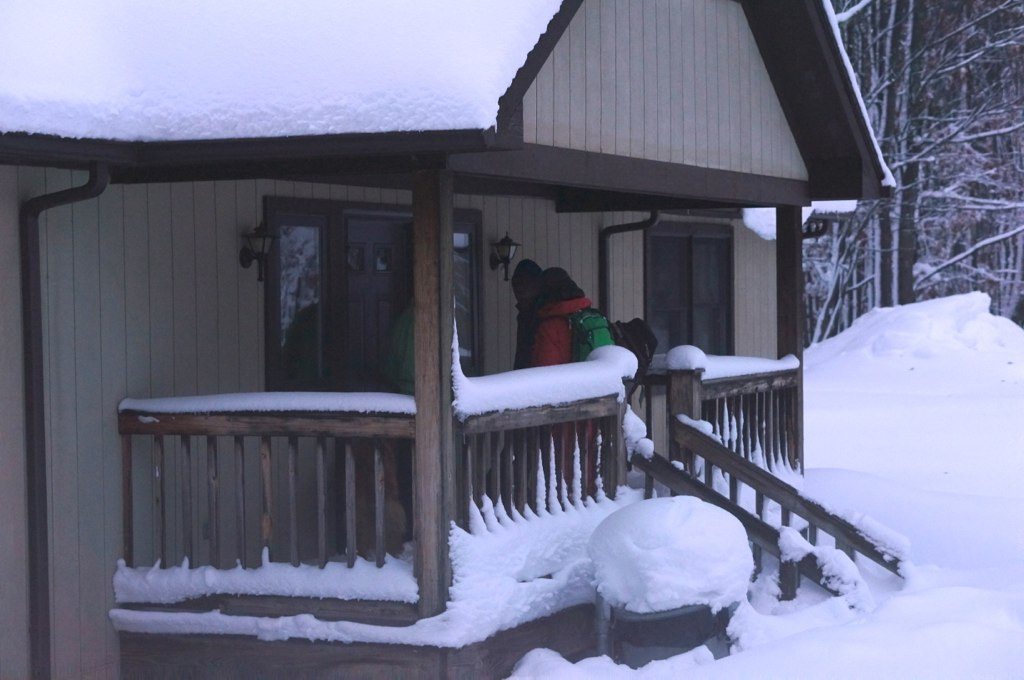 After stoking up the fire to try to warm up our cabin, we were treated to an all-you-could eat dinner of pork loin, roasted potatoes, chicken soup, salad, rolls and cake back at the hotel. Sitting around in the dark with a bunch of friends, skiers who were a long way from home, we shared stories and made a plan for the next day of skiing before heading back to the cabin to for an early night. 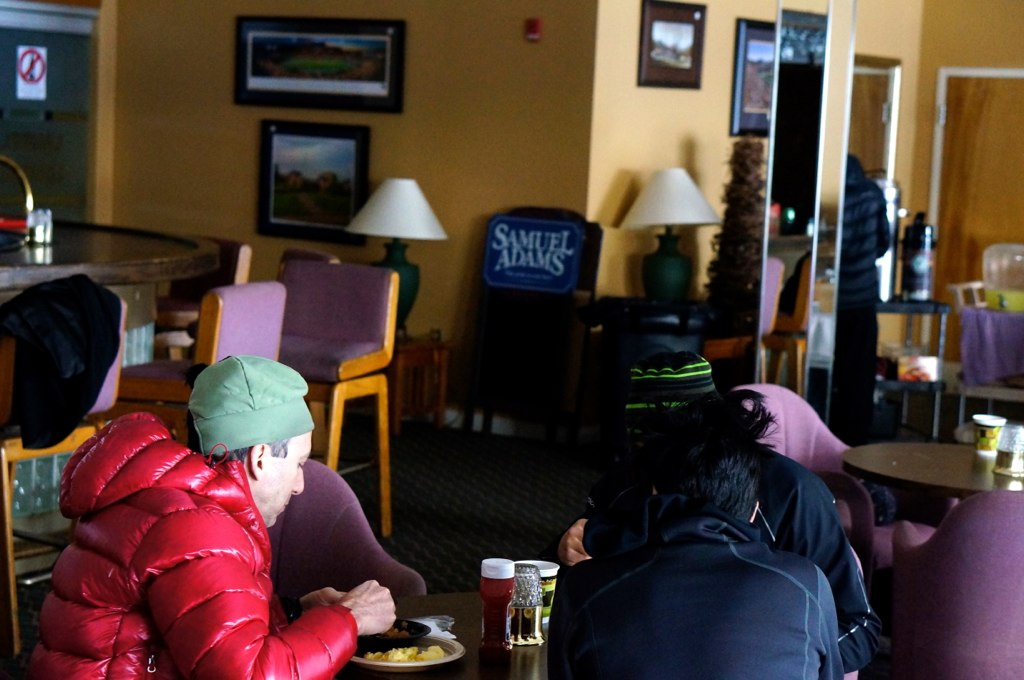 First thing in the morning, we grabbed a quick breakfast back at the hotel before heading over to check out another ski area just down the road called 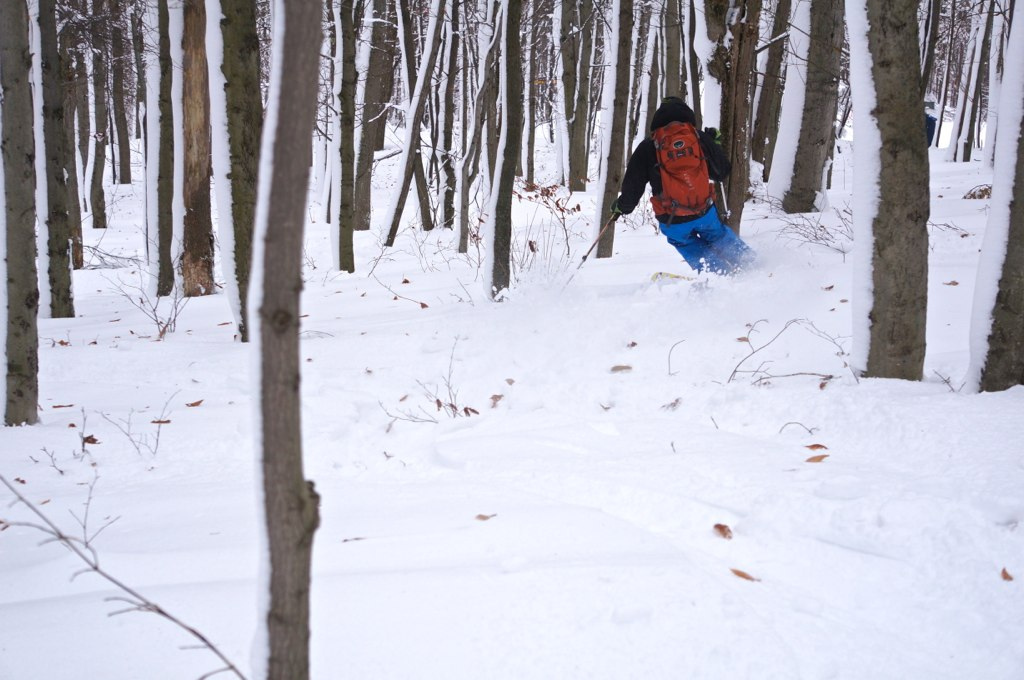