Adam Carboni and Tansy Michaud didn’t intend to create a short film about snowmaking when they arrived at Plattekill Mountain last winter.

Enamored by all the little details that keep a ski resort running, the duo originally sought to create a behind-the-scenes vignette of the mountain. Then they met Macker and Laszlo—two veteran snowmakers of this quaint family-owned operation—who are the lifeblood keeping the resort running.

“It dawned on me that the real story is what’s under your skis, not necessarily the chair that takes you up,” Carboni explained in regards to how the story morphed. “The word 'snowfarmer,' that’s a word that Macker actually used the first time we talked with him. It’s something you really don’t think about—but they are farmers.”

As a result, they followed these two gentlemen for what became the final piece, Snowfarmers, which explored the snowmaking process at one of New York’s last remaining mom and pop ski resorts. We caught up with Carboni to learn more about the process behind the poignant short film.

Since 1990, 15 percent of US ski areas have closed due to increased corporatization and rising costs of snowmaking. Adam Carboni Photo.

What got you so interested in the snowmaking process/the lives of snowfarmers?

AC: I grew up snowboarding a lot, but being from Alabama a lot of my mom’s family members were farmers. I could relate to that notion of being in touch with machinery and also the earth—it’s a different type of outdoorsman. It’s funny to think about as people who make snow as being farmers, but they are.

Did you gain a new respect for the people that work at smaller, family-run resorts like Plattekill by making the film?

AC: From the very beginning we could tell that Plattekill was special. It just feels like somebody loves it.

Once you start meeting everyone at the resort, you realize that not only does everybody know each other but everyone directly contributes to the big picture. There would be moments when we found the owner of the resort stirring the soup for the guests in the kitchen.

After meeting these people you get the vibe that they don’t want to do what they do anywhere else. To put that in perspective, it seems like within the ski industry things have become more corporate—so to find this place feels a like a diamond-in-the-rough.

Snowmaking is imperative for smaller mountains like Plattekill and when Laszlo Vajtay bought the resort in 1993 there were no snowmaking operations. Adam Carboni Photo.

Do you hope that people might watch your film and be inspired to visit a mom-and-pop operation on their next ski trip?

AC: As we were making it, we didn’t want to feel like a commercial for Plattekill. Our goal was to do a portrait documentary that analyzes this piece of Americana that is disappearing. I’d say in the age of Amazon and $140 lift tickets these days, you could definitely use some more of these $70 mom-and-pop spots.

Plus, there’s so much history here. The '50s was known for the ski popularity that was coming out of New York City, and at its height there were a collection of resorts nicknamed “The Big Three” and “The Little 12."

Today the Big Three still consists of Hunter, Windham, and Belleayre, but out of The Little 12—Plattekill is the only one left. People used to take the train by tens of thousands on the weekend to watch ski jumping in the Catskills. 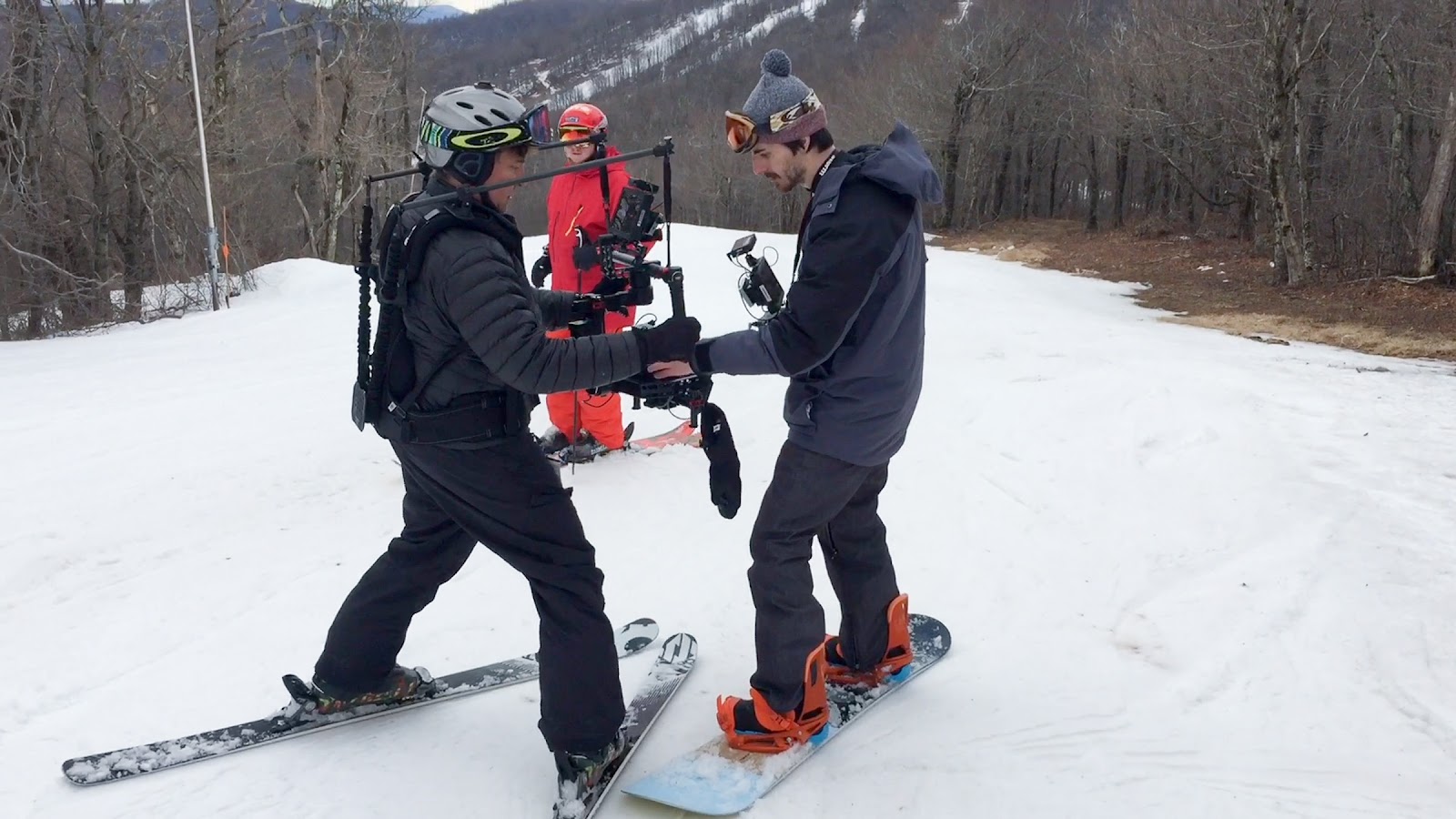 Laszlo—the owner of the resort—also assisted in the filming process. Carboni put him in a support vest so that he could carry the camera on a stabilizing gimbal. Adam Carboni Photo.

Anything else you want to say about the process of making the film?

AC: Here a few anecdotes that you might find interesting about the making of the film.

The opening montage of “swirling snow” was actually filmed inside a small fish tank. The white particles are just that: particles. We created a cloud chamber experiment, which detects particles in the atmosphere and got a normal camera lens VERY close to the macroparticles and filmed them in slow motion as they formed and swirled.

For the torchlight parade ending sequence with the flares, we relied on Laszlo, the owner of the mountain, to actually ski with our camera. He's a very advanced skier—having been a ski instructor—so we trusted him with our equipment way more than ourselves.

The whole interview with Macker in the snowcat was very spontaneous and almost didn’t happen. I jumped in quickly when he was trying to get up the mountain and make a grooming deadline, but I didn’t know how hot it gets inside of there! I was wearing ski clothes for single-digit weather, and inside that cab it must have been 85 degrees.