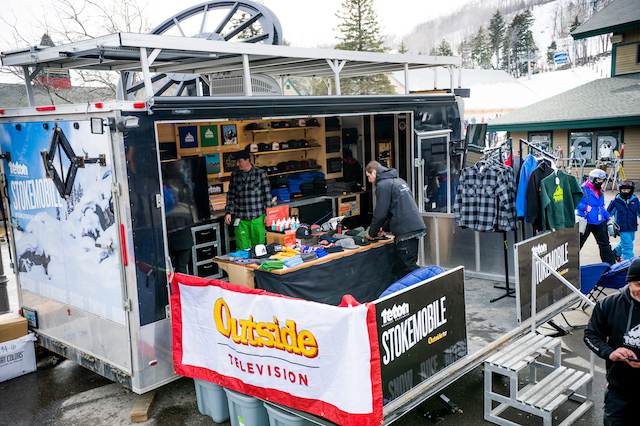 The Stokemobile was shaking hands and slinging gear all weekend long, just like Washington would have wanted. Mike Dawson photo.

Teton Gravity Research's Stokemobile just wrapped up a three-day weekend enjoying some pristine park laps at Mount Snow with our partners Outside TV and BLDG Active.

It was an awesome 72 hours of riding, and we had so much fun at the resort we're planning on returning in April for the Minus Zero Festival to party with our friends Odesza, who are headlining the festival.

But, before we head back, we want to equip you with all the knowledge we gained over the holiday weekend for the best ways to kill a day at Mount Snow. So read up, and start planning your tip in April: We'll see you there.

Part of Mount Snow's legacy is just how close it is to major Northeastern cities. The resort is less than four hours north of New York City and less than three hours northwest of Boston. 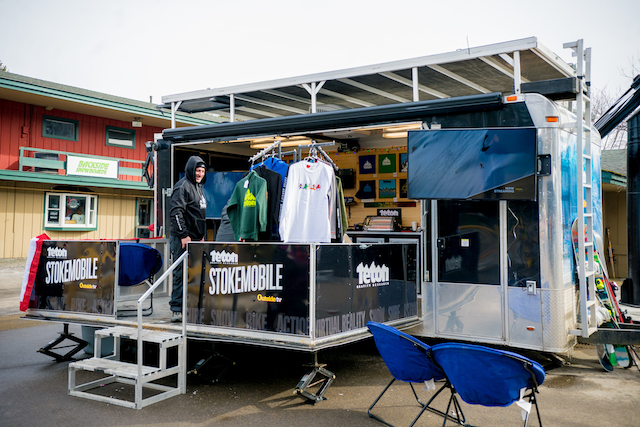 While we love life in the Stokemobile, there are more comfortable options for lodging in town. Mike Dawson photo.

Getting to the resort is easy. If you're coming from New York, take I-95 North to I-91 North in New Haven, Connecticut. You'll get off I-91 North at Exit 2 in Vermont and take Route 9 West 20 miles to Wilmington where you will hop on Route 100 North and follow it nine miles to Mount Snow. From Boston, you just get on Route 2 West until you hit I-91 North and follow all the above directions. If you need more specific directions, just head to Mount Snow's website.

As far as places to stay once you get to Mount Snow, there's a good amount of lodging in West Dover, where the resort is located. As far as the best bang for your buck, you can't go wrong with Snow Lake Lodge, which offers a $72 ski and stay deal. If you have someone else split the the room with with, it's $72 a head which gets you a bed to sleep in, a lift ticket and breakfast to eat.

If you're in need of a quick bite before heading off to the hill, Sticky Fingers in West dover makes killer stuffed croissants. The food is perfect for the skiers and snowboarders who prefer to grab and go; the ham and cheese stuffed croissant is immaculate. 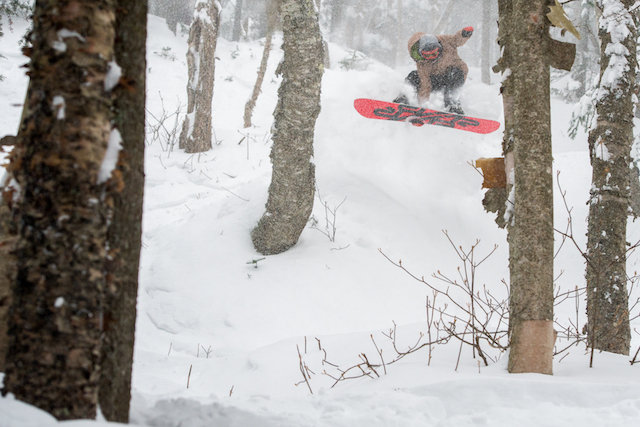 If there's actually snow falling, you'll want to food in your stomach to fuel your legs. Mike Dawson photo.

If you've got some time to spare, swing by Dot's Restaurant down in Wilmington. The Berry-Berry Pancakes are famous across the country for being one of the best ski town breakfasts in the U.S. and if you get a chance to try them you'll be hard-pressed to argue that assertion.

Mount Snow's major claim to fame is its terrain park program. The terrain parks at Mount Snow are consistently voted among the best on the East Coast, and after one trip to Carinthia Parks it becomes obvious why.

With 11 separate parks and over 130 different features, Carinthia Parks offers everything from the East Coast's oldest Superpipe to a buried Vermont red barn that acts as a hip hit. Carinthia has every type of terrain you could want to hit.

If terrain parks aren't quite your cup of tea and you're looking for steeps and glades, your best bet is to head to the north face of the mountain. The Olympic trail is set up a bit like a ski racing course, and allows you to access the Trials glades which are on the skier's left side of the trail. If the mountain is catching fresh snow and the trees are really firing, head to the main face of the mountain. You can hit Ego Alley which leads to the best glades on the mountain. Or, if trees aren't your thing, you can lap Rip Chord: It has the steepest terrain at the resort. 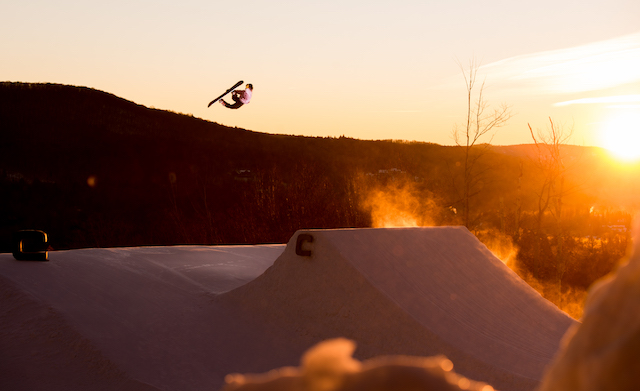 The parks are the stars of the show at Mount Snow. Mike Dawson photo.

Mount Snow's proximity to the metropolitan areas in the Northeast means it tends to punch above its weight class when it comes to the après scene.

The newest bar at the resort is called Canned, which only serves beer or cider made in Vermont that is served in cans. That might sound restrictive, but given how big the brewing scene is in the Green Mountain State, it averages around 35-40 different beers on any day. And given the fact that Mount Snow's entire base area has a beer license, you can just grab a brew and walk around.

If you're a big fan of live music, the Snow Barn draws awesome acts and offers cheap drinks and good pizza within walking distance to the lifts. But, if you want to get away from the resort, head into town to TC's Restaurant. It's owned by Kelly Clark's brother and tends to bring in more of a local crowd. And if you're dying for a great meal, the Williamsville Eatery in Newfane is a champion of locally grown and raised farm-to-table cuisine.