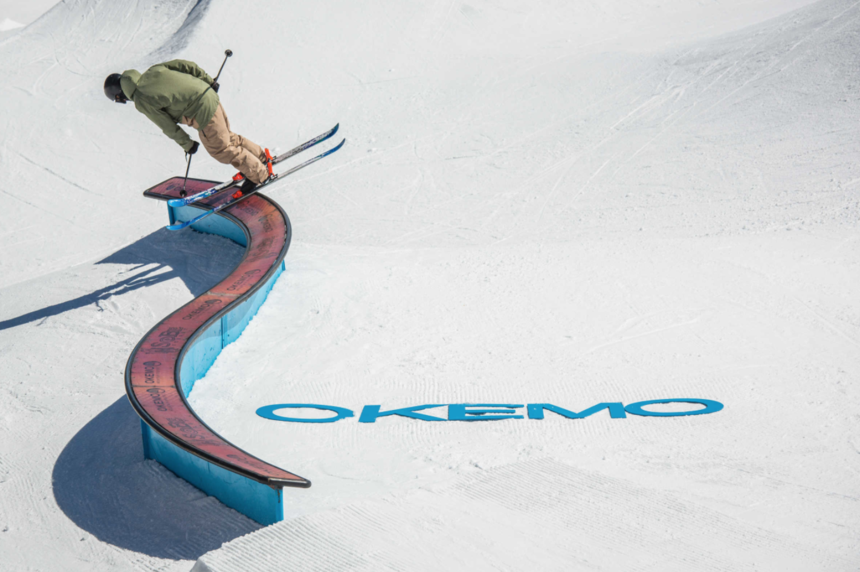 Okemo's steadily been building up its terrain parks over the past decade. Now, the Central Vermont destination is a go-to spot to get jibby. Photo: Courtesy of Okemo

This past weekend, Teton Gravity Research's Stokemobile rolled through Okemo Mountain Resort with our partners Outside TV and BLDG Active to visit one of Central Vermont's true gems.

We were graced with a true rarity–blue skis and warm temperatures in Vermont–and had a rollicking time meeting up with some of our fans and hanging out in the quaint town of Ludlow (population ~2,000). So, we thought we'd share our tips to making the most of a day at Okemo.

Though the town of Ludlow isn't exactly a bustling metropolis, part of the appeal to Okemo is that it's relatively easy to access. 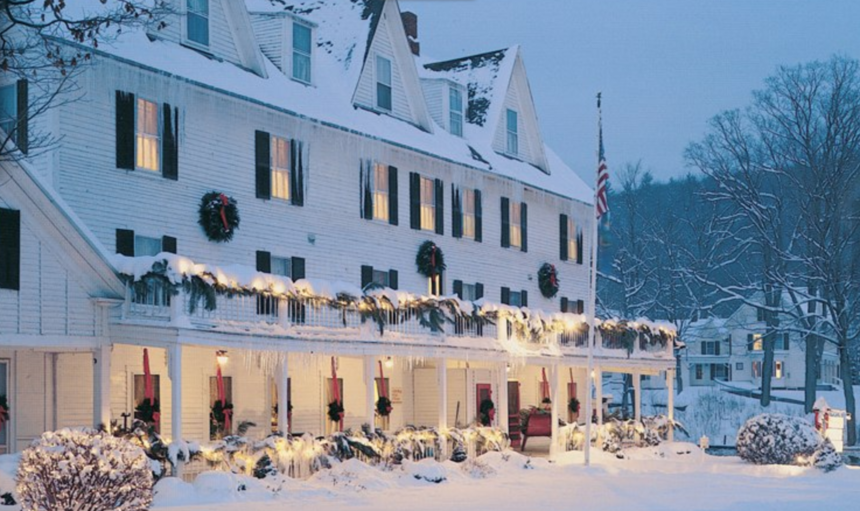 If you're driving from the south, like most are, it's a straight shot up I-91 North to exit 6 in Vermont, at which point you take VT Route 103 North for just over 20 miles to Ludlow, where it is impossible to miss the resort.

If, for some reason you're flush on cash but choose not to fly to the Alps or the Rockies for your skiing, you can always jet set into the airport in nearby Rutland and drive the thirty minutes on 103 South to the resort. And if you are one of the few not driving from points south of Okemo, here's a more detailed listing of driving directions.

When it comes to lodging, your options in Ludlow will likely boil down to staying at a property on the mountain, at one of the resort's hotels or in one of the colonial-style inns in the town. The Echo Lake Inn is a pretty solid bet if you're set on staying next to the hill. Otherwise, open up your housing search to Rutland, and you're sure to find something that fits your budget.

Nobody likes riding on an empty stomach, and luckily Ludlow has a couple great breakfast joints that serve large portions at cheap prices.

Cafe at Delight opens super early every morning for those looking to make first chair, and $10 at the nondescript breakfast spot will buy you an ungodly amount of food. It offers some of the best pancakes in the Green Mountain State that are the approximate size of a hubcap and served with–what else–pure Vermont maple syrup. 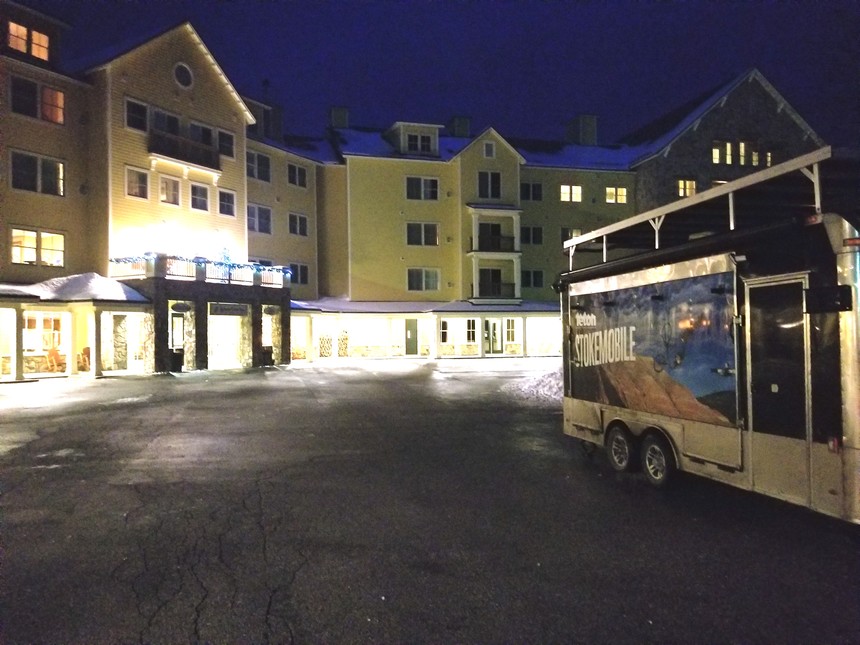 The Stokemobile rolled into the Jackson Gore Village at the foot of Okemo late night so the TGR crew wouldn't miss any early morning runs. Photo: Courtesy of Spo

If you're looking for more of a grab-and-go breakfast, the breakfast sandwiches at Java Baba's are the stuff of legends. As one commenter on the NewSchoolers forums put it, a breakfast sandwich from the tiny cafe "can make rain turn to snow."

Despite its location in the vertically-challenged Northeast, Okemo packs a solid 2,200 feet of vert, which makes for a fun time if you enjoy ripping top-to-bottom runs on New England packed powder (read: ice).

It's hard and it's fast, and some of the best groomers on the mountain are named appropriately, with runs like Upper World Cup providing you a chance to point 'em and haul ass, while trails like Double Diamond and Outrage allow you the opportunity to dip into the trees in the off chance you catch an elusive Northeastern pow day. 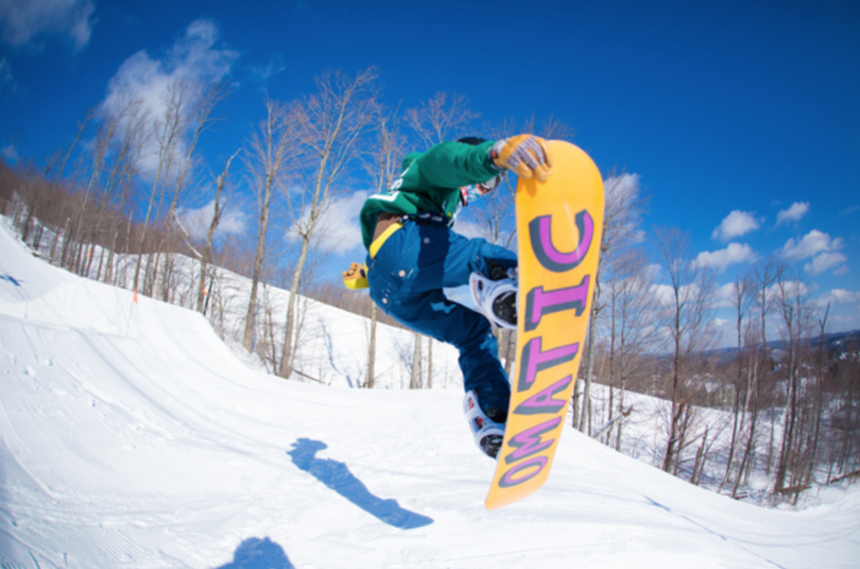 If the skies are clear and the sun is shining, head to the park. Photo: Courtesy of Okemo

The true stars of Okemo are the mountain's multiple terrain parks, which claimed a the mountain a top five spot in TransWorld Snowboarding's 2016 Park Poll for best East Coast parks.

The mountain is home to the longest superpipe in the East Coast, and has an even mix of jib and jump features spread through its nine park zones. With a total of 97 features and a pretty devoted snowmaking team to make sure most of those features stay open, it's a good spot to get some park laps in.

Again, your options for where to grab a brew after a day on the hill are a bit limited in Ludlow, but just because the small town lacks quantity doesn't mean it lacks quality. 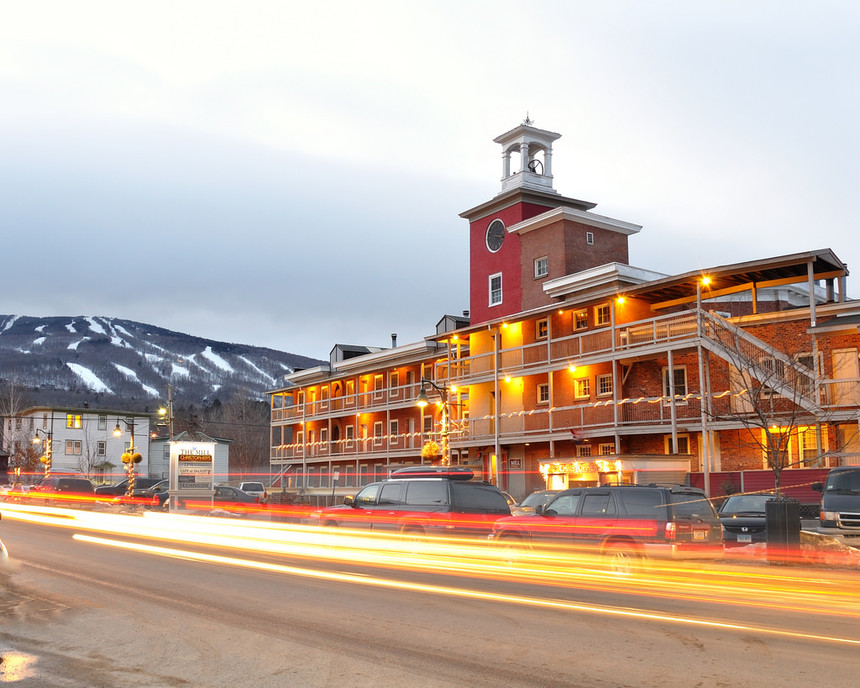 While long exposure shots can make any town look bustling, the reality is Ludlow is pretty low key. Photo: Courtesy of Knight 725/Flickr

There are a couple bars in Ludlow that attract a great après vibe–The Killarney in town and Tom's Loft Tavern at the foot of the mountain are the most surefire options. Tom's will be your bet if you're looking for amazing smoked pork, nacho platters that can feed a small village and more of a sports bar vibe. If the name didn't already give it away, The Killarney is the spot for you if you're looking for an Irish Pub with all the trappings–live music, trivia nights, the whole lot.

If you're looking for a bit of a more active nightlife, you can always head up to Rutland–which is jokingly referred to by locals as Rut Vegas–or Killington.