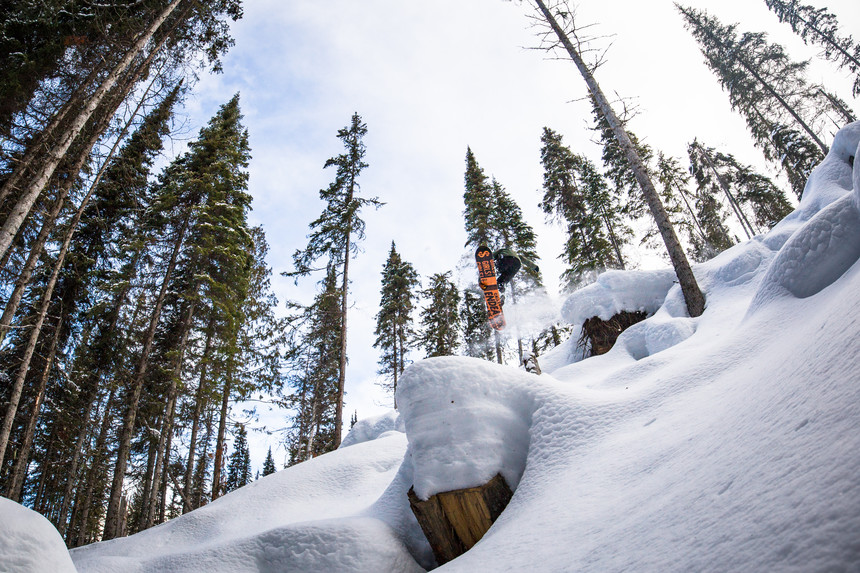 One bajillion-trillion-million and two. Over the course of a lifetime, that’s how many turns we skiers will make. Probably. I’m no numbers scientist or mathama-whatever, but I can say with great confidence that a skier will make more turns in their life than he or she can count. Which is why I find it curious that a single turn can stand out above all the others when we daydream. What is the reason for this mental oddity? Smack-ya-in-the jaw, punch-ya-in-the-gut true love, that’s what. 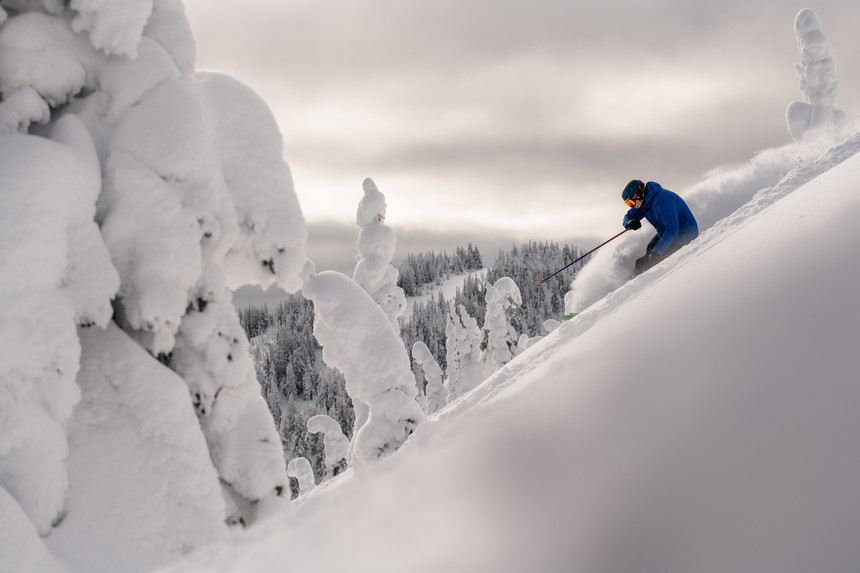 “If I’m by myself and I let out a yeehaw, you know it’s good,” Bodie Shandro told me about the turns he just can’t quit. Shandro is a ski guide and local legend at British Columbia’s Sun Peaks, Canada’s second largest ski resort. He’s skied every inch of Sun Peaks’ 4,270 acres of terrain, but the wiggles that pull at his heartstrings have happened in Gil’s zone—three rolling benches that sit on 500 acres of well-spaced glades, open ribbons of blower pow, and five- to 10-foot drops. Gil’s used to be a locals’ favorite backcountry zone but, in 2015, Sun Peaks opened it as a controlled inbounds area to the public. 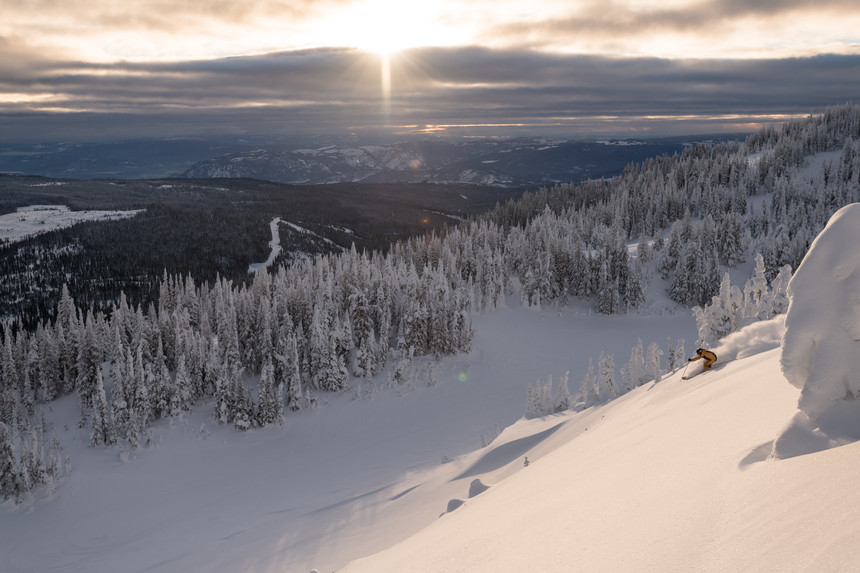 It’s easy to see why skiers pine over Gil’s. The terrain looks like a movie set. Snow-covered Christmas trees pepper a mid-angle slope that holds snow globe-worthy powder. The snow is light, feathery, and plentiful. And there’s nearly no competition for fresh tracks. (Even if Sun Peaks had crowds, which it doesn’t, the 10-minute bootpack is just enough to keep the less dedicated out.) Even though it is technically within the boundaries, it still feels out there—rife with wild choose-your-own-adventure temptations.

“There is one particular line in there that I had that I try to recreate,” Shandro says. “I always ski in that same spot, ski that same line, trying to return to that moment. I try to replicate it. It was that good.”

I know what he means. I’ve only skied at Sun Peaks once, but there is one turn I made in Gil’s that I will think about for the rest of my life. 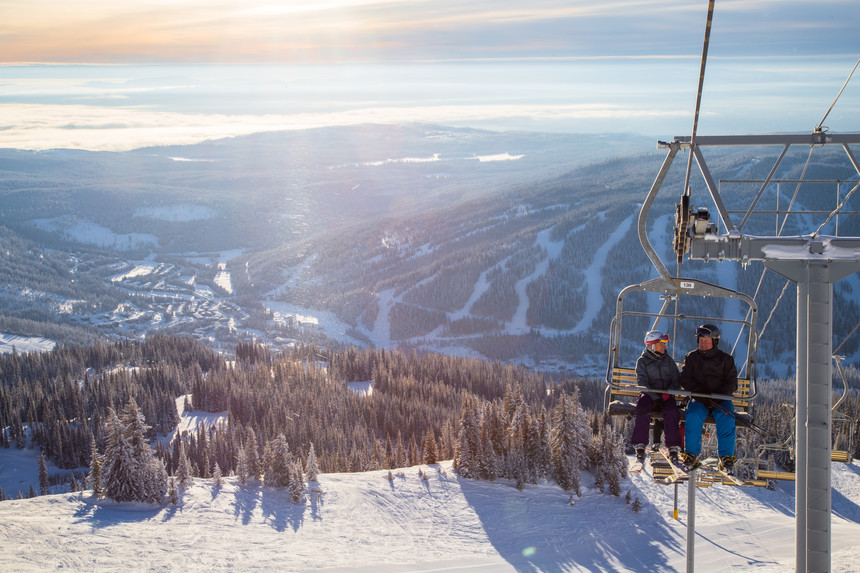 I zipped out of the trees and into an open swath of deep white. I aimed to my right, toward a gradual convex roll. I took a hoppy, upright set-up turn; a short left-footer that sprung me into the air and allowed me to load up for my next turn, the turn. My knees were bent and swiveled to face directly fall line. My chest squared up downhill. I fanned my tips left, slightly rolling my ankles uphill, and released my tails. I pushed my downhill leg out and bent my uphill leg until I could feel cold powder rush past my crouched left hip. I punched my right hand across my chest and dragged my left hand through the snow above me. I pushed harder into the angle, crouching deeper into the meat of the turn, and then…poooof, I was there.

Everything came together in that turn in Gil’s. Schmearing through an explosion of Canadian snowflakes, everything was calm and focused and free and beautiful. If you are a powder skier, you know this moment well. The single, fleeting, wondrous moment in a turn when the snow hits you all over and life is just effin’ great. It’s the moment that makes you want to scream in joy and silently reflect in gratitude. And in Gil’s zone, these moments are just waiting for you to find them. 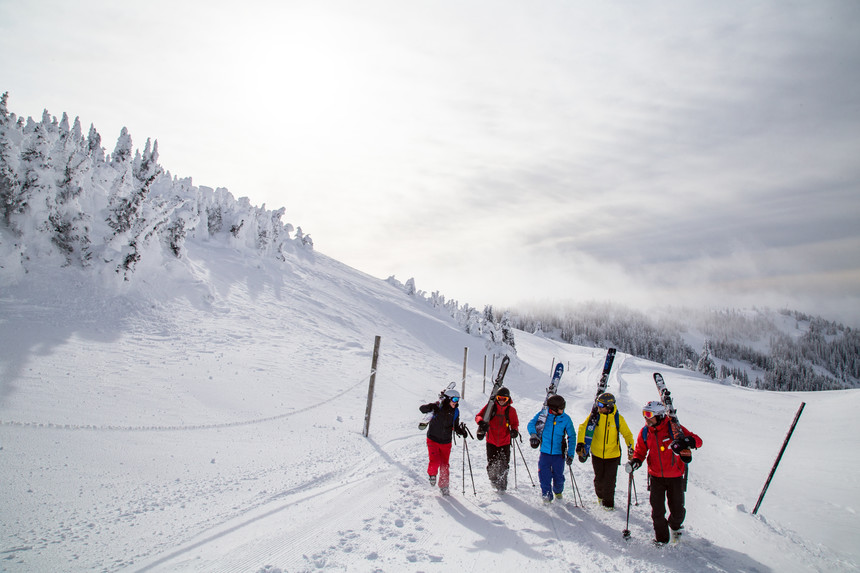 Bodie Shandro and other professionally certified Canadian Ski Guides hold daily Intro to Backcountry Skiing camps in Gil’s at Sun Peaks. While this is not a certification course, participants learn the basics of avalanche gear, partner rescue, reading terrain, and snow science. Create your own Sun Peaks love affair here.