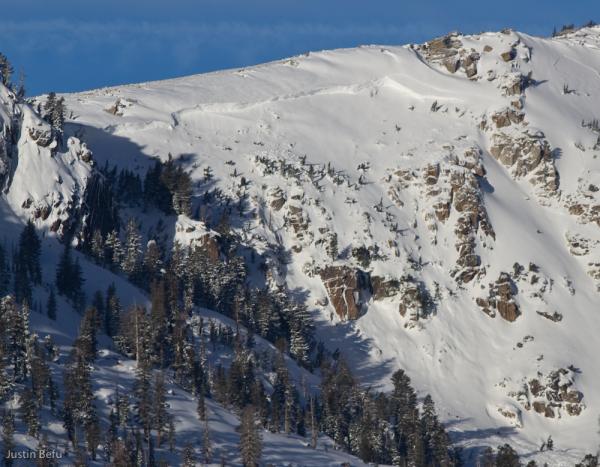 A large avalanche crown is seen in the Tahoe backcountry on Dec. 27, 2012. In late Decemeber, as the area saw new snow, it also saw many avalanches, including two that caused fatalities at Alpine Meadows and Donner Ski Ranch.

Sunday, Dec. 23, was yet another stormy powder day in a string of many at Squaw Valley, Calif. Ski patrol and mountain operations teams had been doing battle with harsh weather and copious snowfall for days on end. Midway through the morning they managed to open the KT-22 chair to the public. Shortly after opening, a powerful avalanche was triggered above The Fingers, directly beneath the chairlift. The avalanche swept up one skier, a 39-year-old female, and was so powerful that chunks of the avalanching snow deflected up in the air, knocking a 16-year-old male skier from the chairlift and into the avalanche. Both skiers were conscious, and neither completely buried in the slide. The woman was treated and released from the medical clinic, and the young man was taken to the local hospital to be treated for a shoulder injury. This post-control inbounds avalanche was an unfortunate accident, but the outcome could certainly have been much worse.

Earlier in December, the Tahoe region experienced above-average temperatures, resulting in rain that created a distinct crust layer in our snowpack. Since then, faceted snow crystals developed both above and below this crust creating some especially weak layers. Significant amounts of new snow piled up above these persistent weak layers resulting in an uncharacteristically unpredictable snowpack for the area. With an advisory rating of “considerable,” a 3 on a scale of 1-5 (low, moderate, considerable, high, extreme), the Sierra Avalanche Center’s advisory for the days before Christmas said, “Overall the data indicates a snowpack teetering on the edge of failure.”

The following day, Dec. 24, 2012, broke clear and cold in Tahoe. The blue skies were a welcome respite from the relentless storm that dropped 4-6 feet in four days on the west side of the lake. The holiday crowds were out in force at resorts around the region, eager to ski all the new powder, and I was among them. I went to Alpine Meadows that morning, the “considerable” avalanche danger rating, recent large avalanches, and persistent weak layers in our snowpack kept me from venturing into the backcountry. Summit chair opened shortly after 9 a.m. as patrol finished avalanche control on the front side of the mountain. For my first run I headed out to Art’s Knob, my friends and I shocked to find a 4 foot crown on the convex roll at the top and large cracks in the snow stretching in both directions along the ridge. The entirety of the storm snow had slid down to the rain crust, one of many large intentional avalanches at the resort that day.

About an hour later, the distinct blue and white colored Care Flight helicopter flew overhead toward the Sherwood chairlift. I thought it odd due to the fact that Sherwood wasn’t open, nor had it been yet this season. I hoped they were doing some sort of training exercise, not realizing that patrol was doing avalanche control work back there at the time. Later that day, I was saddened to hear the news that Bill Foster, a 28-year veteran of the Alpine Meadows Patrol, was caught in an avalanche while doing control work.

According to a press release from Amelia Richmond, the Squaw Valley/Alpine Meadows public relations representative, “The avalanche was triggered by an explosive charge that had been thrown by a senior member of the ski patrol team. The patrol team members were positioned in an area that was, based on historical experience, believed to have been a protected area. The charge triggered the avalanche, which broke much higher and wider on the slope than previously observed in past snow safety missions.” With nearly 3 decades of experience on the Alpine Meadows patrol, Foster had routinely performed avalanche mitigation work in this area. “The patroller was found within one minute and uncovered within eight minutes from the time of the avalanche,” wrote Richmond, “After uncovering the buried patroller, members of the ski patrol team immediately began CPR.” Foster was flown via Care Flight Helicopter to Renown Hospital in Reno where he succumbed to his injuries the following day. 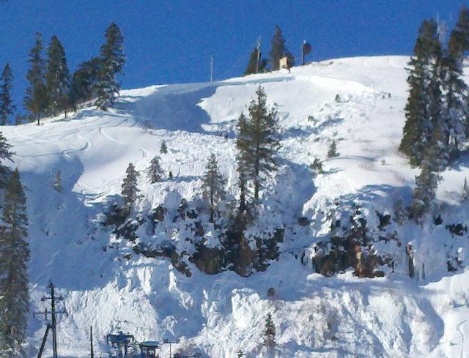 The site of the in-bounds avalanche at Donner Ski Ranch.

That same day at Donner Ski Ranch, a small ski area at the top of Highway 40 on Donner Summit, an avalanche occurred around 9:30 a.m. According to the Tahoe Daily Tribune, the Nevada County Sheriff’s Office received a report from a man around noon on Monday saying that a member of his group was overdue and was feared to have been caught in an avalanche that occurred sometime around 9:30 a.m. The search was assisted by neighboring ski resorts and a body was found in the debris, buried under 2-3 feet of snow, nearly five hours after the slide happened. Truckee resident, 49-year-old Steven “Rocker” Anderson was snowboarding that morning when he was caught up in the inbounds slide. According to reports, Anderson had just moved back to the area and was enjoying his first day snowboarding for the season.

Since that tragic day last week, the Tahoe region has received roughly two more feet of snow, burying our weak layers in as much as 7 to 8 feet of snow. As our snow depth increases, triggering avalanches on our persistent weak layers is becoming less and less likely, but remains far from impossible. Any avalanches that propagate along the facets by the buried rain crust are likely to be massive and catastrophic. Our typical “more stable than most” snowpack is clearly different than usual, and it takes some getting used to. Our current weak layers and recent events have reminded me that there is no room for error or complacency when it comes to avalanche safety. Skiing is the best thing in the world, but it’s not worth dying for. Have a happy and safe New Year.