Teton Tested: Can The Trek Farley EX Full Suspension Fatbike Do It All? 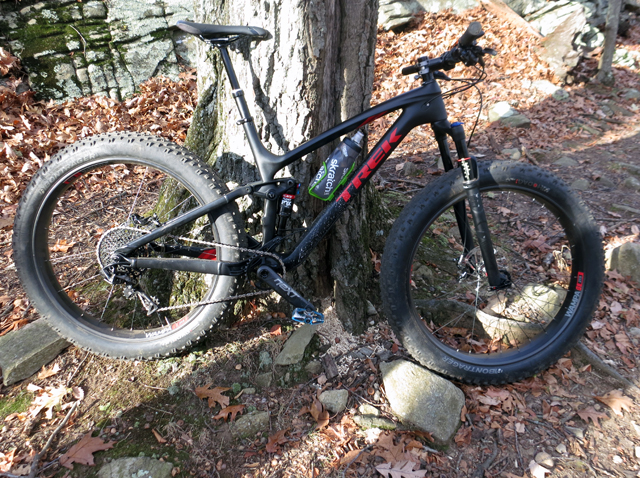 Is there a bike out there you can just throw your leg over to crush any terrain the whole year round? Extremes like DH and XC aside, Trek is getting really close with its new Farley EX 9.8 fatbike.

Check out the bike’s marketing video below; big props for nice creative that took months to execute and some sharp match-frame editing. My content-marketing brain salutes you.

Fatbikes have evolved significantly since their early, slow-crawling, snow-tank days. There are now carbon race, full-suspension and good old-fashioned steel bruiser flavors. In 2015 and early 2016 fatbike sales boomed with Midwestern, Southwestern, and Southern states leading the charge (though dipping toward the end of last year). People who ride them love and stay on them year-round. It's easy to see why Trek doubled down on the category.

But just how far can these grip-mongers go in today’s hard-charging trail world? 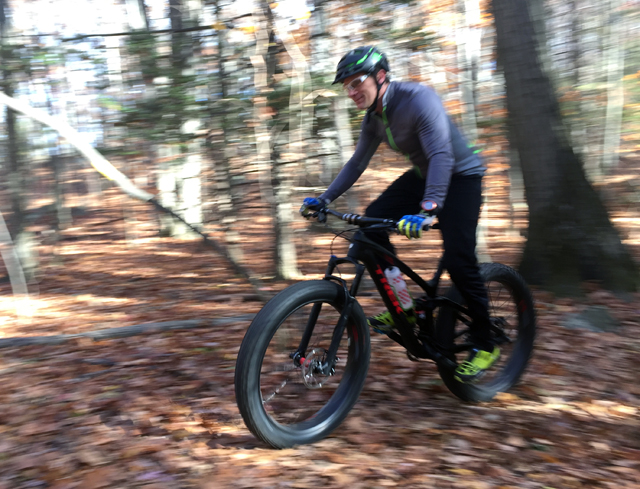 At 32 pounds, the Farley EX feels light-ish for a fatbike. It's only about four or five pounds over a high-end 120/130mm trail bike. It comes tubeless, of course. (Running tubes in fat tires would add two pounds.)

Dialing suspension settings on the Farley EX requires about 3 to 5 rides for experimentation. It takes a bit to figure out if your tires are too soft and the hydraulics too hard, or the other way around. I wound up running about 8.5psi in my tires (7 on snow) and slightly less than recommended pressure in the fork and shock (who knows, maybe I lost some weight). Though I did find that once you settle into the bike’s trail capabilities, you start to run higher tire pressure.

As with all other Trek bikes, fit and finish are high quality. A matte-black with red paint scheme and carbon parts come together very well. 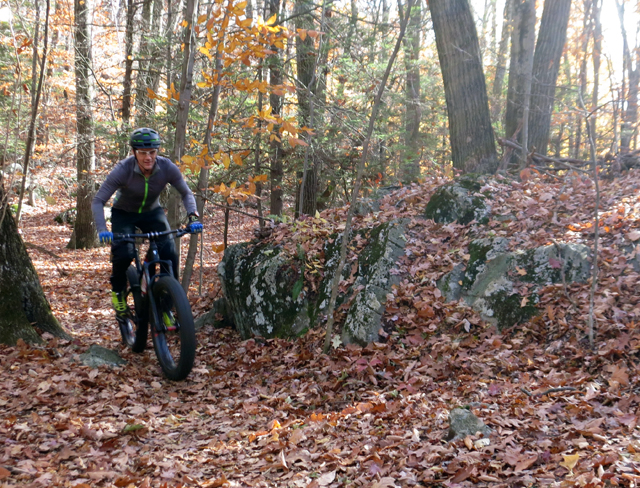 Lets get this out of the way: This bike climbs everything. Everything. Really, your legs are its only limitation. I reviewed Trek’s (rigid) Farley 9.8 last year and loved it, but the EX adds another dimension for technical ascending, descending, and rocky trails.

During my few setup rides, I felt the extra tire grip while braking, added to what is essentially a top-end 32/33lb trail bike, can flex the Rockshox Bluto fork’s 32mm stanchions. Rowdy trail bikes usually come with 34mm stanchion forks, though there just aren’t many options in the Fat market outside of the Bluto. The Farley is an aggressive bike which begs you to ride it harder than other fatbikes, so torsional and braking loads placed on the fork from its wide tire/rim combo probably exceed those of a ‘normal’ setup. You will ram the Farley hard into more stuff.

However, once I found the right PSI for fork and tires, as well as settings (one click from open on dampening and more toward the middle in rebound), that flex was minimized and it operated well. I never had to back off of anything rough because of the fork.

For downhill and technical sections I’d drop my heels to bore those 3.8 tires deep into whatever surface I was on. The RE:aktiv shock always remained active and smooth in ice/snow, damp trail or rock gardens. Trek’s ABP braking and full floater suspension technologies really steady the ship. Some trail damping credit can go to fat tires, but this suspension remains responsive under any condition.

Some bikes' platform damping negate the need to play with a shock's compression, but here the open/middle/climb switch makes a difference—in a good way. Middle is fine for most things, but if you know you’re in for a climb or a ripping descent, it’s easy to reach down and flip the lever on the fly. 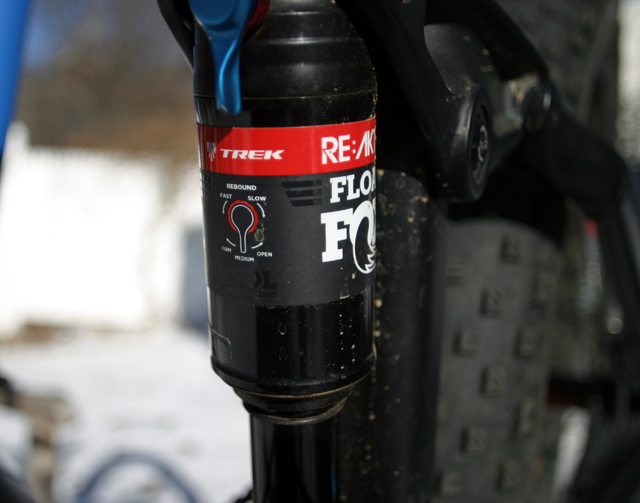 The custom fox shock with the three-position damper in easy reach. GW photo.

While riding, the insane amount of trail-quieting carbon, tire volume and capable suspension can lull you into thinking you’re not going fast. But you are. More than once I’d look back to see my usual crew quite far behind me. Also, more capability means less stops or dabs down. So you’re faster over the course of a whole ride. Where others put a foot down over a slick skinny, I’d keep rolling.

In terms of technique: On regular fatbikes you can approach technical sections with a bit less speed, picking through features without fear of losing traction. With the Farley EX, ramping up speed and power into technical sections, the way you would a regular trail bike, is more the norm. Though planting your tires on nasty rock and expecting them to grab like a handhold works fine. It’s an interesting balance, somewhere between fatbike and trail bike riding. Lots of body English. 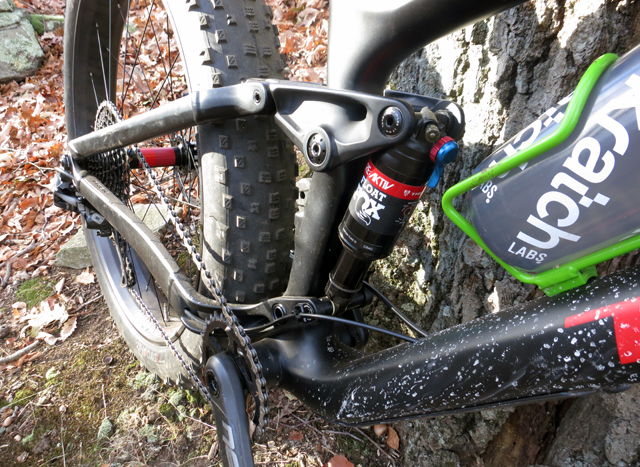 The full floater ABP suspension design and RE:aktiv shock stay active, plush and performs like the rest of Trek's line. That is NOT my sweat on the downtube, that's from the Tailwind nutrition drink. GW photo.

We finally got a bit of snow here in the East, so I took it out on our shit-show trails of thawed-then-frozen ice, loose leaves and dirt. While most folks walked much of the way, I was on the regular Farley I’d been riding for months. To me, everything was fine. And that’s what this bike is about.

When others flop around like salmon in the bottom of a boat, you keep pedaling like nothing’s wrong. There is no day on which you can't roll it out of the garage.

The bike’s superior trail capabilities make you think about a couple things. I would be curious to run some dirt-specific rubber and get the Farley away from the Bontrager Hodag tires’ even, round profile. The Hodag is a solid fatbike tire, its transition from center to side is smooth, though not snappy and the sidewall is soft, like other fat tires. I feel a Maxxis 3.8 Minion FBR/FBF combo on dirt would be awesome. I personally prefer tires with distinct transition zones and slightly burlier shoulders. Of course tall knobs aren’t great for snow. For snow, the Hodags are great so far. 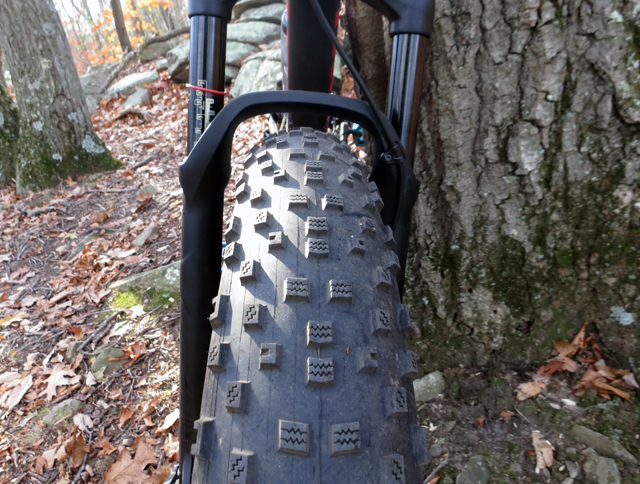 Also, you really need to run a pound or two more PSI than other fatbike’s tires before rip-snorting it through rock gardens. The only flat I had was on an aggressive trail ride; I flipped the shock’s switch to climb through a fast, flat area and then neglected to flip it back when re-entering a rougher section. Tearing through the rocks with the back locked out pinched the rear tire.

Once you re-train your brain away from thinking it's a fatbike, you're set for anything. It comes off the car and it's the right bike for wherever you are. And it's fun. The poppy little jumps, boosts and features you enjoy so much on other bikes can be enjoyed with this one. It isn't lumbering.

One of the nicest benefits is the triple-crown confidence which enters your mind as you approach any trail feature. "I've got crazy grip, mad rollover, and phenomenal trail suspension—nothing will go wrong". It leaves you free to have at it and enjoy the ride. 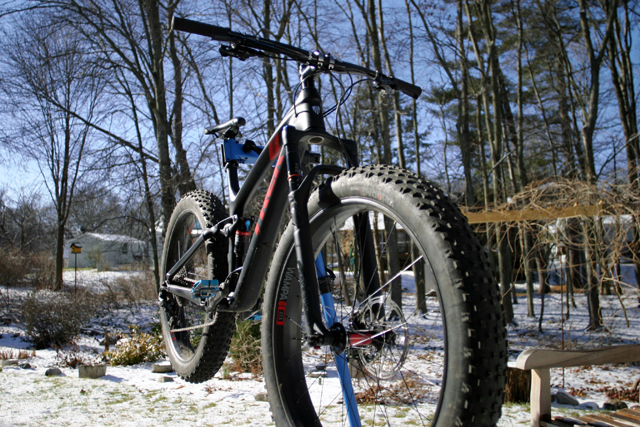 This is about the most snow we could muster out east. GW Photo. 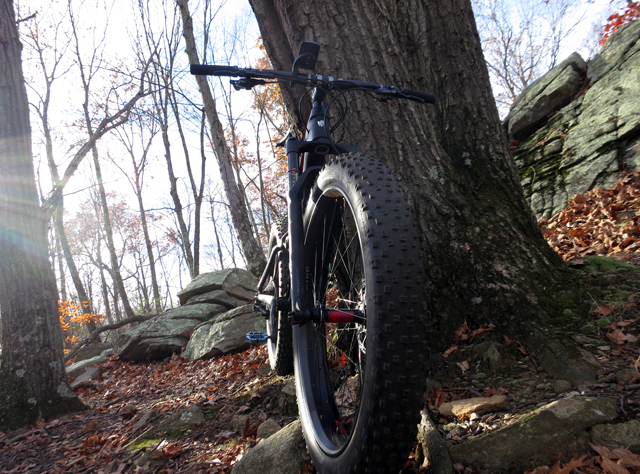 Any time. Any place. GW Photo.

Are you going to race XC on the Farley EX? I guess you could in the Fatbike category, though hardtail fatties will be lighter. Are you going to enter an Enduro? That would be a stretch. You wouldn’t win, but with sanity you might survive. The point is; such a wonderful set of capabilities come together—exceeding all expectations you had of a fattie—that any thoughts of what you'd like to ride can be entertained. Any condition in any season will be a great trail ride.

If you just want one mountain bike that can handle pretty much all terrain the Farley EX is it. You never have to get off it. It’s not remarkably heavier than your normal mountain bike. Gone are moments where bikes aren’t right for terrain. Something about that is nice. 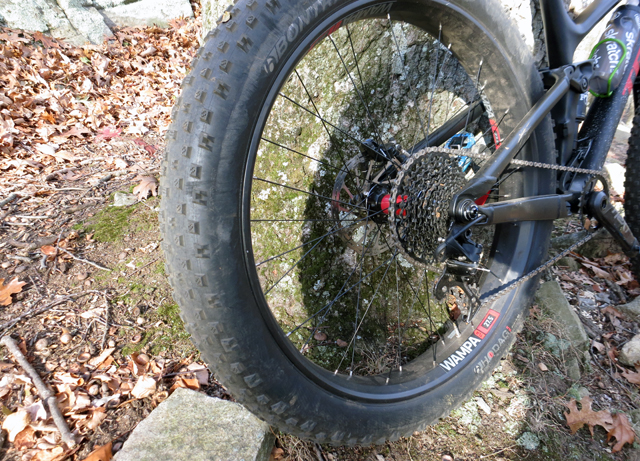 It should also be noted the Farley EX does not ride like a plus-tire trail bike. The grip and feel of the tires is still distinctly ‘Fat’. Is the best bike for every condition? No. But that will never exist. Farley is a jack-of-all-trades. And a very capable Jack at that.