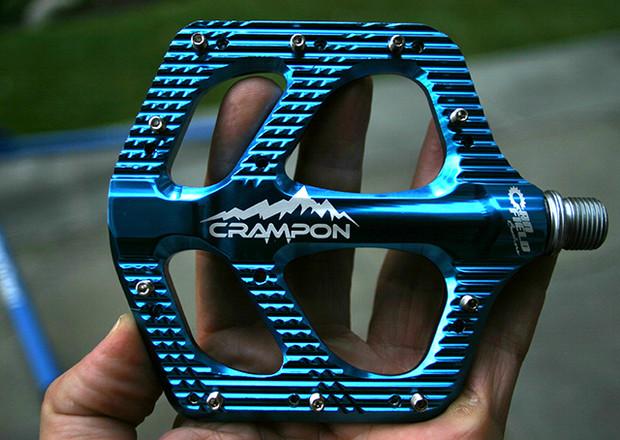 As you can see, it's got some good size. GW photo.

A few weeks ago Ryan Dunfee was riding on the Canfield Riot at the Big Sky Bike Test, a bike we all liked, which came spec’d with their Crampon Ultimate pedal. He felt the pedals made him feel more planted in the bike and offered remarkable control. In fact he skeeved the pedal off the bike and used it to ride other bikes. And he rides almost exclusively flat pedals. He called up Canfield and asked to hold onto them for a bit, they agreed and he pushed out this great review

Crampons are Crack for Clipless Shredders

Then, a week or so after his review, they dropped us a line saying the Crampon Classic pedal is getting a makeover—renamed the Crampon Mountain—and would we like a new pair to review. The new Crampon Mountains would feature sealed bearings and a very large 112mmx106mm platform. Aside from being slightly wider, they also use slightly thicker pins than the Ultimate, so they’re a tad heavier because of the extra material (but only by 56 grams). 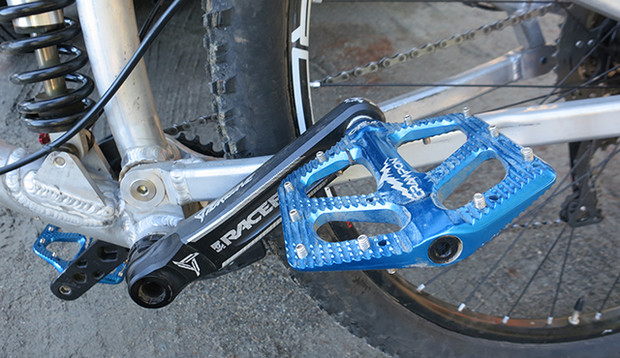 And they look good in the raw. GW photo.

After some jostling and a 2-out-of-3 thumb wrestling victory, the new pair went to me, who almost NEVER rides flat pedals. I do teach in flats (it’s kinda the rules), but never gave it much thought. Not to mention my VP-59 flats were actually mocked at the Big Sky Bike Test. TGR can be cruel.

Nobody will laugh at these pins. GW Photo.

In truth, I primarily ride clipless Shimano XC or Crank Bros MalletE pedals, so this would be a good opportunity to test a good pedal on someone who doesn’t ride them a lot.

There are advantages to flats, of course. You have to use proper technique for jumping, bunny hopping, clawing over rock gardens etc. You can’t just yank up on the pedals to change direction or get the rear end up. There’s also added confidence from being able to dab off quick or throw a foot out in a fast corner without having to ‘click’ back in. 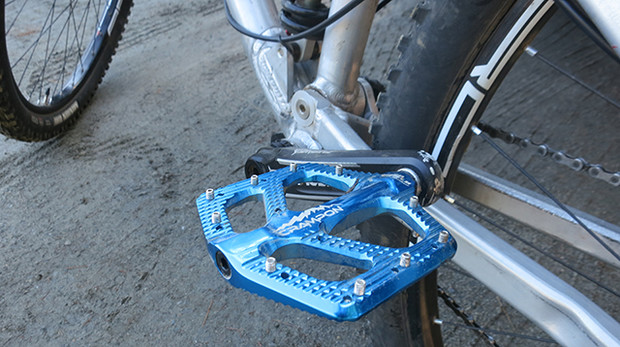 Hard for your feet to miss this platform, even if you're not looking. GW photo.

I rode the flats on a few test trail rides and then raced them in an Eastern States Cup Enduro at Thunder Mountain in Charlemont, MA. They really are quite astounding.

Once the pins are in your shoes (I rode them with the 5.10 Freerider Contact for what it’s worth) you’re pretty close to clipped in. The only time you come out is if you subconsciously try to throw in a cheat by jumping up your feet to yank the back end. You quickly learn to use a proper “V” wedge technique for that.

Related: Should you be riding flats or clipless?

It’s so glued that it actually takes more effort than you’d think to readjust your feet slightly should you put them onto the pedal not quite straight. Because you ride flats more in the middle of your foot than in clipless (where the spindle is right under the ball of your foot), every once in a while I’d want to slide my feet forward a bit. But that’s a minor change you get used to quick.

It's actually a bit of work to disengage from your rubber sole. GW photo.

The Crampon Mountain feature Canfield's patented convex shape, which I feel is optimum for a mid-foot placement. If you were to ride with the pedal's center under the ball of your foot, you might want a more concave shape.

The convex shape tapers down to a svelte 6mm leading edge. GW photo.

The pedals come with a bunch of extra pins and an allen wrench. What’s nice is the pins are easily removable or add-able (you can even throw a few more in the middle of the pedal if you want more grip over the way they ship). 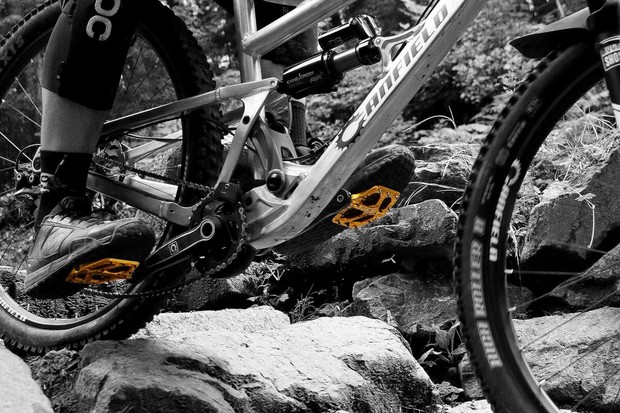 If you don’t ride flats a lot and are looking for a pair, these are great, because they lock you in right away and the large platform ensures comfort even if you don’t throw your feet down in exactly the right spot.

If you do ride flats a lot, I feel these are also a big win for light overall weight, their insane grip and the ability to easily replace and/or customize pin placement. Not to mention the sealed bearings and cromoly axle means they’ll be around a while.

My old flats? They look awesome on my daughter’s bike.