The Best and Worst of Sochi Olympic Coverage

From Bob Costas to USA Today to Shaun White and Putin, we look back on the best and worst of the mainstream media's coverage of the Sochi Olympics.

The opening salvo of mainstream media's bungled approach to slope and pipe riding came from none other than the hegemon of American Olympic reporting, Bob Costas, who compared slopestyle riding to Jackass in a segment with Matt Lauer. Costas then went on to have this feet held over the fire by skiers and snowboarders for the duration of the Olympics.

It's hard to say to what constituted "fair" coverage of the Sochi Olympics when it came to discussing Russian culture, Putin, the administration of Sochi's construction of these Olympics, and the organization of the Olympics themselves. The early popularity of things like the Sochi Problems Twitter account showed how pre-dispositioned the Western media was to criticize the Russians and their Olympics, at times revealing an embarrsingly judgemental take on a culture few Americans really understand.

At the same time, there was plenty of fire behind the smoke, whether it was the dead-obvious levels of corruption and graft that led to a budget for the Games nearly quadruple that of the Vancouver Olympics, the hasty construction and environmental degradation plainly obvious across much of the Sochi area, the official hostility towards homosexuals, or even the whipping of recently-released members of Pussy Riot by security forces when they attempted to stage a protest at Sochi. Odd timing of such events - like the Pussy Riot whipping and women's ski halfpipe finals happening on the same day - led to some weird reporting that ignored the tough stuff and focused on the happy bubble of Olympic sportage. At at the end of the day, it was hard to say what the "right" coverage of Sochi and its associated negatives would have looked like.

With snowboarding and skiing enjoying new events like slopestyle and ski halfpipe at these Olympics, many pairs were pulled out in the run-up to Sochi as to whether the true, core culture of snowboarding and "free" skiing would be represented on the world stage, or whether the IOC would dump the free-spirited elements of both sports right into the weight room trash can. But there's a phrase here that is appropriate - "skiing (or snowboarding) isn't serious." Despite the intense athleticism of the athletes and the pressure put upon them, I gotta give it up for guys like Sage Kotsenburg for doing his best to keep it light and fun, much like Jossi Wells did when he messed up his first trick of his slopestyle run and aired out three huge, beautiful zero spins instead of the contest-demanded triple corks.

At least until the Chinese start pumping out slopestyle robots who can't ski a chute but can triple cork quad-grab onto every rail in their sleep, we can be happy that slopestyle and pipe athletes will be keeping the anti-jock flame alive on the world's most competitive stage.

Worst: Most Outlets' Explanation of Slopestyle and Pipe Riding 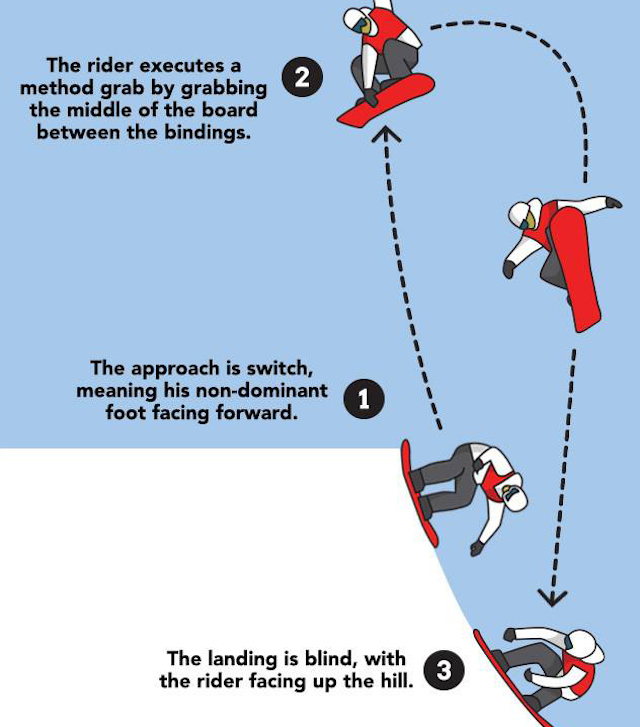 As with any new sport, there was a rush to both report on and understand the complex new niche of sporting excellence that was slopestyle and halfpipe, and the majority got it wrong most of the time. The AP & Getty Images' consistently shot skiers and snowboarders zoomed-in mid-air in awkward moments between grabs or right before landing, giving the general public no context to understand what might actually be going on other than someone in baggy clothes looking like they were certainly about to eat shit. Then there was USA Today's infographic "explaining" Danny Davis' switch method, which was so horribly inaccurate there's not a chance an actual snowboarder was ever consulted on it.

Compared to USA Today's incompetent explanation of a simple snowboard grab, The New York Times' investigation into Ted Ligety's unique ski racing style, where a faster pace is set in a more active rhythm that involves leaning harder into the turn and swinging between turns earlier, looks like a master's degree dissertation. The used of mixed media, awesome overhead angles, animation, and Ligety's own words enlightened the public on a very subtle technique difference that would have been lost even on us "expert skiers" here at TGR were it not for their thorough analysis.

To see Videograss rider Chris Grenier and an acknowledgement of film-based snowboarding careers in a USA Today article is simply remarkable. The same newspaper that puts out the simplest news coverage for consumption at the continental breakfast of every b-grade motel chain somehow saw past Shaun White into the conflict going on internally in snowboarding (and skiing for that matter). There is hope yet!

NBC reporter Christin Cooper, a Olympic medal-winning alpine racer herself, got a lot of flack after repreatedly pushing Bode Miller to talk about his brother Chelone's death this summer, a result of an apparent seizure, after winning the bronze in the Super-G at Sochi. The tense interview brought Bode to tears, and an instant backlash to Cooper and NBC. An unfortunate crossing of the line in the dauntless pursuit for a Hallmark moment.

We know YoBeat's the opposite of mainstream media, but the Portland outfit's Stan Leville deserves all the credit in the world for putting out the best Shaun White humor of anyone. This bad lip reading of Shaun White's press conference announcing his departure from the Sochi slopestyle field was so quick, timely, and hilarious ("Denim, Red Bull, elegant selfies...") it garnered 347,000 views since it went out on Vimeo. If you like that, you'll love the even more random Shaun White lip reading voiced over a Target video of Shaun in a GQ shoot.