The Best Day Out There - Beating The Law Of Diminishing Returns, Just Once 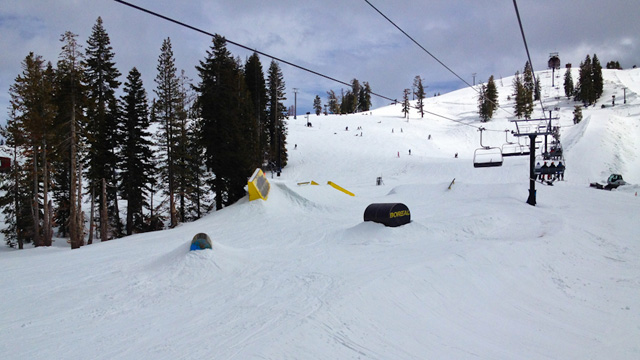 The best days out there can come from the most unlikely places. Photo by Ryan Dunfee

Most dedicated recreational skiers will, at maximum, shred 30 to 70 days a season, depending on other commitments and how long the snowpack holds out. How many of those days will have prime conditions that stoke you out all week long while you finger bang away at the office? Anywhere from three to seven days. And how many of those will you be completely on top of your game, skiing the way you always imagined you could? Maybe one or two. Maybe one every few seasons. It’s a brutal law of diminishing returns we live under here in the ski world. Pros train endlessly to push that ratio toward a more favorable fraction. But for the rest of us, those days where all cylinders are firing all day long, and not just on one line, are so few and far between we forget they can even exist. But for me, March 30, 2012, was one of those days.

I showed up to Boreal, a Massachusetts-sized hill in the shadows of the larger and more infamous mountains surrounding Lake Tahoe. A burning sun and temps encroaching on sixty degrees were keeping the snow hopelessly sticky and slow. Beginners and park rats straight-lined the tiny hill with reserved enthusiasm, gaining what little speed they could. The only line through the park with enough speed sat in the shadows of a stand of fur trees, and I dutifully turned my skis in that direction when all other options were exhausted.

Dropping off the still-sluggish stretch of the main park, the jump line started with a short, steep hip that reminded me of the spines that dominated early New England terrain parks, when the only skiers you saw lapping the park had Hart mogul skis and Fate mogul pants with eyeballs on the knees. After a beautifully poppy air over the back of the hip, you were quickly led into another steep hit in the form of a twelve-foot BMX channel gap. Then a butter pad and a true spine that sent unknowing beaters launching into the flats with too much speed. If you had enough speed saved up, you could slide a lift pole dropped sideways on the snow, but the slush mostly pulled at your bases until you could barely summit the take-off.

Having nothing better to do but hit the only feasible line, I spent what turned into the next several hours lapping this simple, accessible setup. A fog moved in, turning off the heat lamp and beginning to cool down the slush, and my bases began to flow with more and ease. Off the hip, Japan grabs began to flow as if JF Cusson had designed the jump himself; reach down, right ski under the left knee eager to be wrapped up by the left glove, a confident and smooth pull towards the shoulder, right arm casually bent to the side, then quietly center the legs again and four-point the transition and speed away, eyes focused, into the next feature. A Japan grab might not be much to brag about during these Superman days of triple corks, but for me, seven years out of a spinal cord injury that almost left me paralyzed from the waist down, these brief moments of absolute composure and style are what constitute major accomplishments. For a brief second, the wobbles people notice when I limp down the street or try futilely to stand still for longer than five minutes, experiencing a moment of true grace and poise feels like cheating God.

But lap by lap, small boundaries I’d become used to limiting myself to became conquered. First, it’s a nose-butter 360 over a low piece of fencing. Then a nose butter 5. Then a side-entry wallride without washing out. Then a 30-foot C box, then a 270 on to switch out, and then a hand-drag 180. I remember that one – hitting the small spine with speed, flinging my legs recklessly into the air, stabbing my fist down into the snow, and like a simple physics classroom demonstration of cause and effect, finding my legs tucked back under me after the counteracting move. I rolled away switch, the class I picture in my head erupting in astounded applause.

With a hubris now firmly established, one I’d surely never felt since breaking my back guinea pigging that stupid jump in Aspen, I swore next run I’d do a hand-spring 3. I’d seen it done over and over in countless ski films and edits, and I was pretty sure there was not a sexier trick you could do that close to the ground. Charging into the hip on the next lap, I was right back into my leading tempo – perfect Japan over the hip, launch the tails out in front over the BMX gap so that they’d gently catch the edge of the landing, the tips grazing the snow as they dropped back into the tranny, nose butter 3 over the butter pad. It was like the rhythm fooled my body into thinking it was, in reality, mildly coordinated. And just as I got my line of sight back, one solitary pile of snow sat in my way. I carved up the side, popped as hard as I knew how, threw my body into a crazy, unpracticed varial, reached out for the lip of the spine with both hands, and before I could even comprehend what was going on, my two skis were on the ground again. Dead straight and parallel, I skied away without touching down or backseating. It was unadultered perfection on the first try. I usually try to play it cool on claiming tricks, but just this one time, I had to scream.