The Shangri-La Expedition: Part I

In anticipation of the drop of the Higher trailer on November 6th, we're bringing you a mutli-part inside account of Jeremy Jones & TGR's most recent, and most challenging, expedition to the Himalayas to ride one of the most epic spine walls in the world. 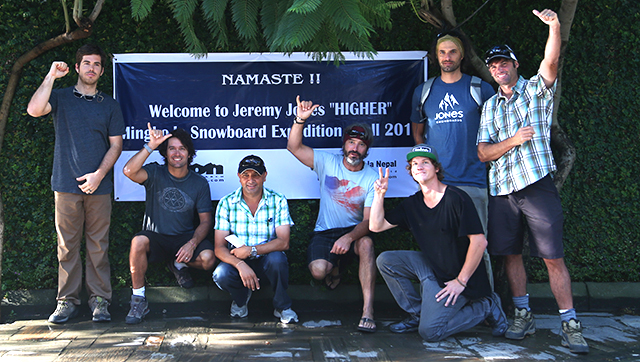 “Shangri-La has become synonymous with any earthly paradise, and particularly a mythical Himalayan utopia — a permanently happy land, isolated from the outside world”

Summer was in full swing when the phone rang. It was Jeremy Jones. I answered with an anxious “Hello?” Was he calling to see how times were? To go over spring mission to Alaska to camp in the snow and film lines for Higher? Or was it a call about a new mission?

“Hey”, he replied. “The reason I am calling is to see if you want to go to the Himalaya. I have found a mountain that has one of the best spine walls I have ever seen.” Unable to contain my excitement, I responded, “HELL YEAH - I am in!!” Two months later, I find myself on the other side of the world with Jeremy Jones, Luca Pandolfi, Nick Kalisz Matty ‘Moo’ Herriger, Chris Figenshau, and Andrew Miller, experiencing the culture of Nepal while searching for mystical line first found in a library book photo back on that other and more familiar side of the world.

From the moment the plane hit the ground it was clear we had traveled to a mysterious and primordial world. The chaos of the densely populated city of Katmundu was a wild change from our first-world filming trips to the Alps, Japan, or Alaska. Rickshaws, street vendors, dogs, yaks and monkeys were everywhere. Constant honking traffic and a myriad of near misses with violently weaving automobiles and motorcycles got the nerves frayed early as we drove through town, but the locals paid no mind. They honked their horns as a courtesy and not out of anger, zipping past to another twisting part of this deep city. 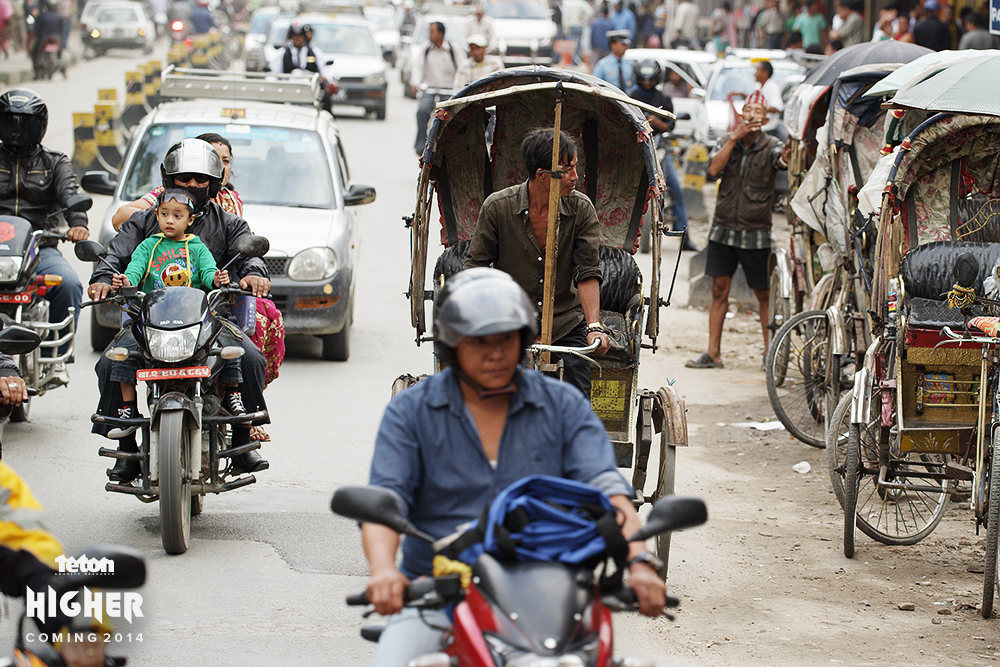 Once we settled in, we hit the streets. Walking through Kathmandu is an adventure marked by narrow alleyways that take you from one ancient time period to the next. Street vendors push their goods and the drone of commerce intensifies throughout the day. The next morning the crew visited Swayambhunath - the Monkey Temple - and Nepal’s oldest monastery. Prayer flags hung by the thousands and the misty morning air was back lit through the trees above ancient stone steps. Monkeys, native to the north-west part of the temple and considered holy, appeared everywhere and prayer wheels, magnificent in size, adorned the area around the main temple. Wafting incense filled the hot humid air as we set to work with our cameras. Swayambhunath was a real photo feast. Our tour guide, Jiban, called us to move to the next zone, but we were nearly unmovable as we felt we were only beginning to understand how to capture this amazing place on film. We finally heeded the guide’s call and boarded the van. 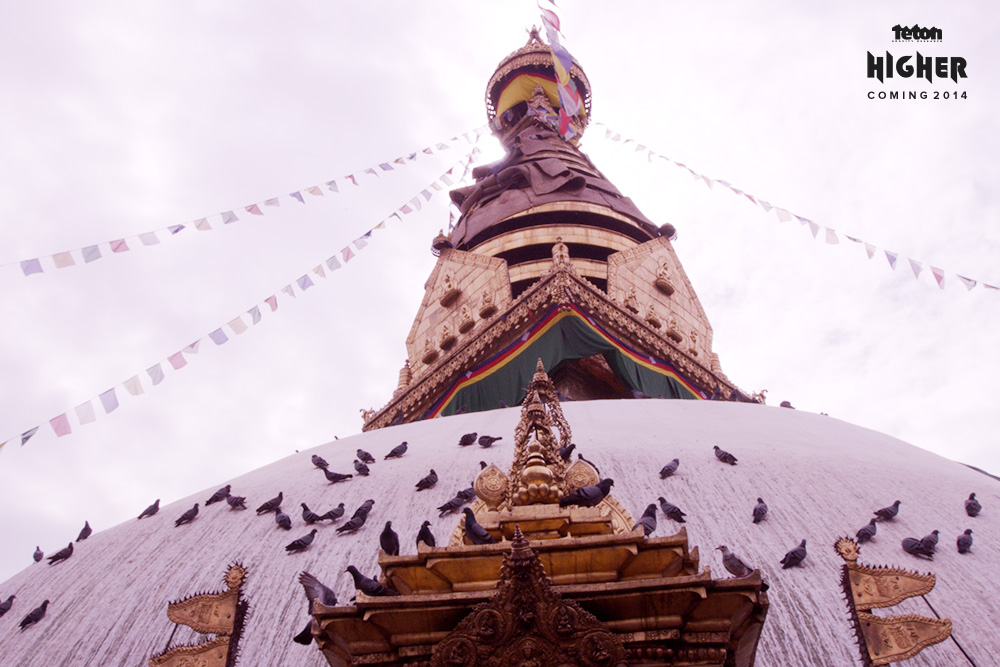 The next stop was Boudhanath, the most famous of the stupas – earthern mounds containing the relics and ashes of deceased Buddhist monks that serve as venues for meditation. We walked through the gate and the monument, one of the biggest stupas in the world, rose before us. Its white dome culminated in a pair of gazing eyes, above which thirteen tapered steps representing the path to enlightenment and fire. From the top were strung countless prayer flags that fluttered in the breeze above Katmandu, their reds, greens, and yellows contrasted against the gorgeous white structure and the yawning blue sky. Beautifully clad Nepalis from the old and weathered to the young and colorful roamed the grounds, walking clockwise as tradition demands. 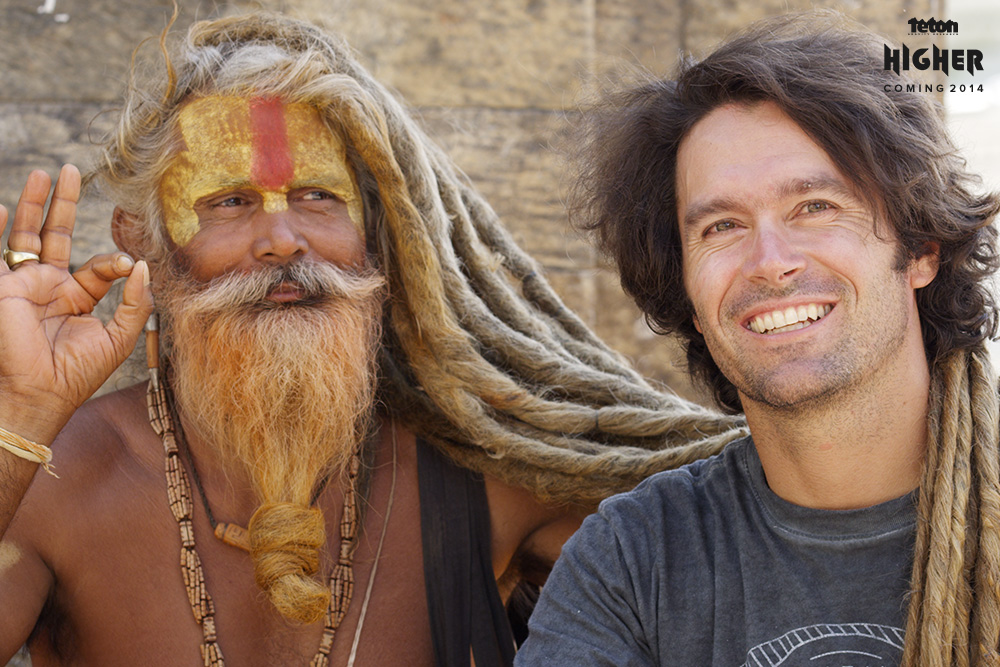 The last stop was an eye opener: Pashupatinath Temple, a Hindu crematorium on the River Bagmati and the most sacred site in all of Nepal. We walked down the road of penny vendors and beggars to a smoky scene that seemed like something right out of Apocalypse Now to us Westerners, but which was instead a revered tradition of the Hindus. Here the deceased are brought, sometimes straight from the ambulance, to be cremated in the open air. Our crew fell into silence, and out of respect, our cameras were zipped away in their bags.

Families purified their deceased in the holy water of the Bagmati, wrapped their bodies in white, orange, and red cloth, and then laid the bodies on stone tables above the river. Fuel for the open-air cremation consists of the food and butter of the cow, Hindu’s sacred animal. The straw, butter, and sugar is laid along the body and the fire is set at the mouth of the deceased by one of their offspring. We sat among hundreds of others observing this solemn affair. The body would burn for the next four hours as the family grieved, and this process would be repeated over and over on each stone table, all day and all night below the highest peaks of the Himalayas.

The trailer for Higher will drop on November 6th. Pick up the other two films in the trilogy, Deeper and Further, on iTunes now.