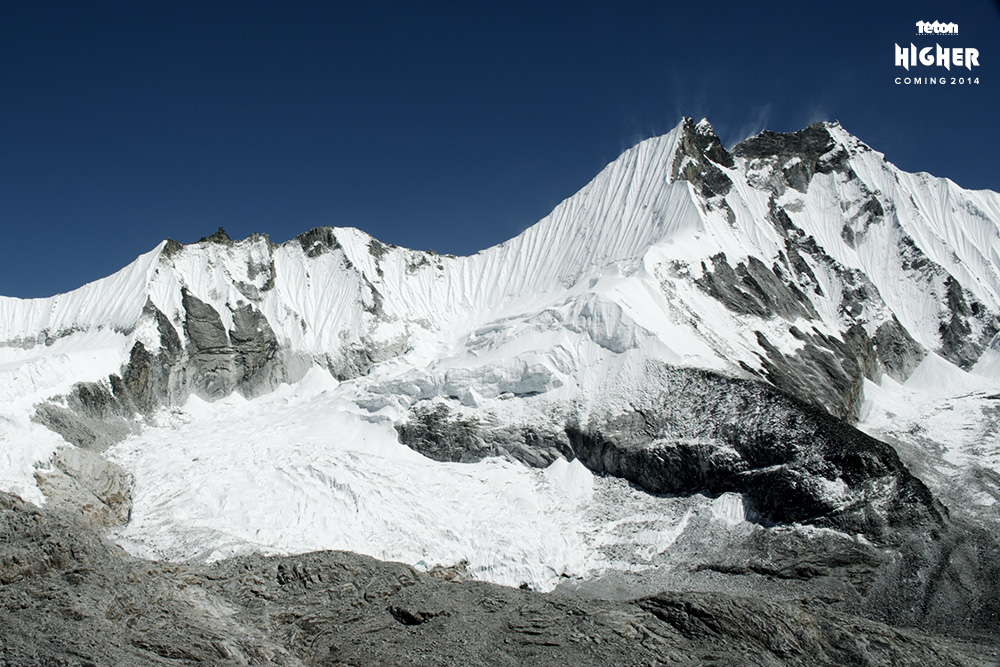 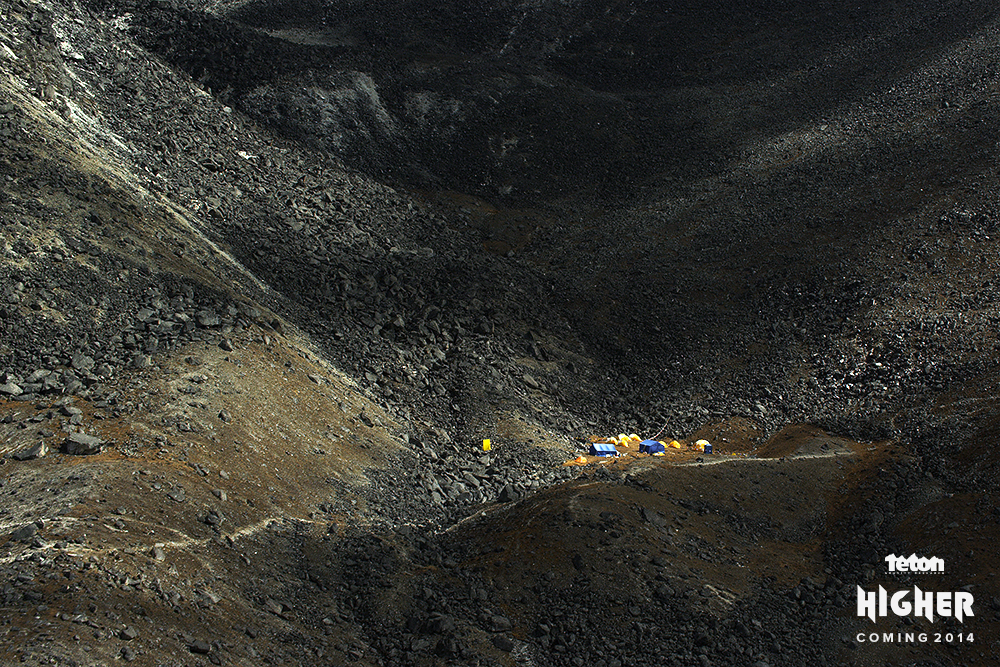 Base camp, where the crew rested and carbo-loaded for the final push to Shangri-La Peak.

But in the final push, the sheer brutality of attempting to snowboard the Himalayas would reveal itself. After successfully negotiating the glacier, the riders arrived at the base of Shangri-La Peak to find a face unlike any other they had seen. Instead of flattening out near its base - like faces in Alaska, Norway, and Austria tend to do - this spine wall maintained its upside-down look. Once on top of it, they would find that instead of mellowing out, the 55 degree slope actually became steeper halfway down, adding another degree or two to its pitch. It was like nothing Jeremy had ever seen. “I’ve been home for awhile now,” Jeremy said over the phone this week. “And I’m still spun out on it, and I was just in awe of the Himalayas the whole time I was there. It was a place I never got a handle on.”

While they were ecstatic to prove the naysayers wrong and discover that there was indeed powder at 20,000 feet, the area’s snowpack remained wholly unfamiliar throughout the trip. Sitting right on the equator, the Himalaya were also susceptible to the violent influence of high-altitude UV rays, which wrung moisture out of the snow like a twisted pool towel. This created a mystery snowpack that never truly revealed its secrets. With limited time on the snow over the course of the five-week trip and with having to dedicate so much time and energy to a single opportunity to strap in and ride their snowboards, the mystery remained locked up.

But it was the simple reality of operating at high altitude that was the Himalayas’ cruelest feature. Of the four times the crew made it above 19,000 feet, three of them would happen within a four-day timespan. For one of the first times, Jeremy found himself panting on a bootpack as they attempted to summit Shangri-La Peak. Jeremy, Luca, and cinematographer Chris Figenshau would spend two hours tunneling through sugary neck-deep snow to gain the final four hundred vertical feet of the saddle. They desperately tried to keep their heart rates in a tolerable zone as they swam through the bottomless snow that crested the collar of their jackets and fell down their necks and backs. 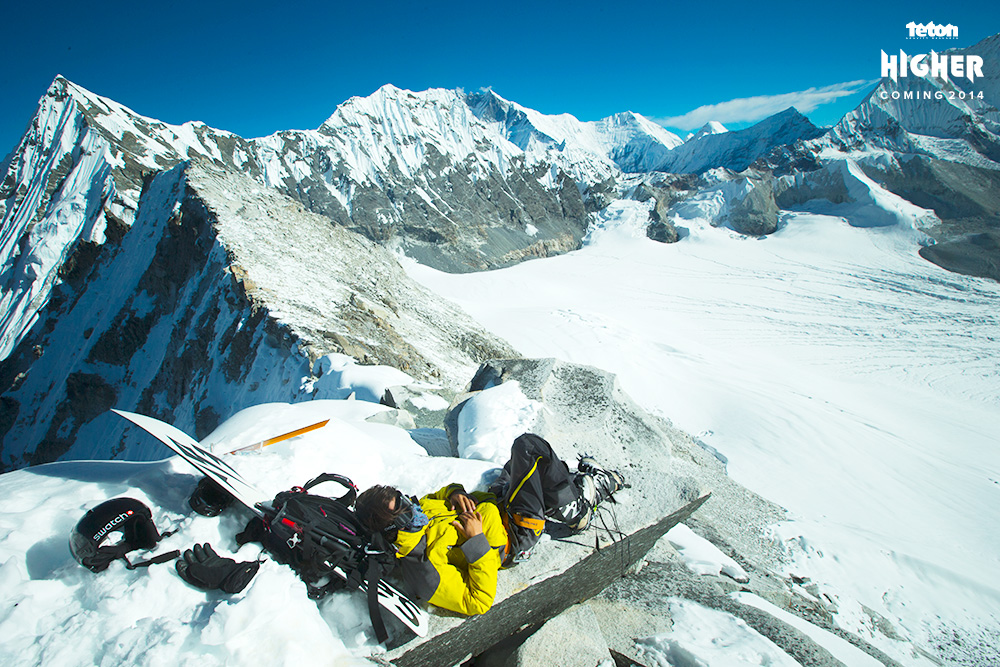 Jeremy, spent from swimming through neck-deep snow to reach the saddle, recovers before going for the summit.

Nearly spent from the effort, they were forced to nap on the saddle to regain enough energy to go for the peak. “I always keep a Clif double espresso 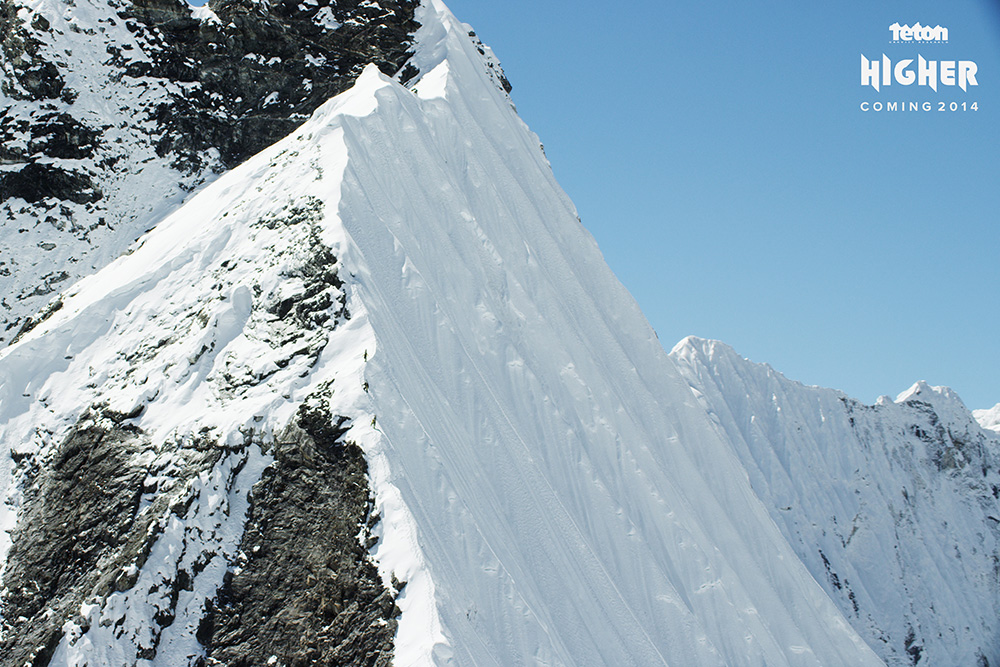 Jeremy, Luca, and Chris on the high-altitude sufferfest of the Shangri-La Peak ridgeline.

Following every six-hour summit attempt and after relaying the okay to the film crew below – with each sentence uttered painfully between a sequence of heavy breaths – Jeremy and Luca would take on the most demanding snowboarding of their lives. Luca - an unbelievably experienced rider who had descended some of the most daring lines in the Chamonix area and off the sides of Mont Blanc, and who had ridden the Himalayas before - still had yet to ride a spine, and listened humbly to Jeremy's advice about tackling the unknown terrain. To Luca, riding at that altitude was, as he put it, “torture.” 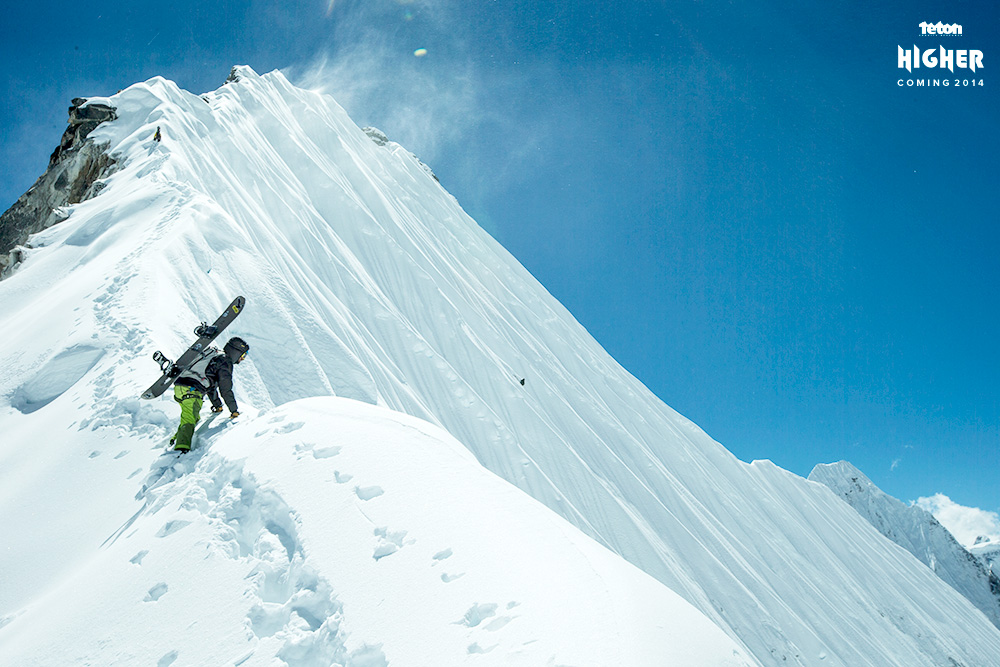 While Jeremy and Luca were able to control their breathing and heart rate on the way up by keeping a slow pace, on the way down it was impossible, and there was never enough oxygen. With the capillaries in his lungs expanding while desperately panting for air, Jeremy would feel like he was underwater. “Every time I strapped into my snowboard, it was like the biggest and longest big-wave hold-down I had ever experienced as a surfer.” He compared his experience at altitude to being thrown off a monster wave and plunged to the bottom of the ocean with only a split second to catch a breath before being held under and tossed and flipped at the will of the ocean, always with the fear of never making it back to the surface and to air. “And it felt like that every time I went snowboarding.”

After every attempt, Luca and Jeremy would return to high camp white as ghosts, eyes wide open with blank stares, voices worn and raspy, their bodies and minds utterly spent. “That kind of riding, if you can call it riding, is so tiring - even emotionally,” Luca would later say. They were so drained upon returning to camp that Luca would fire up the Jetboil camp stove and hurriedly devour a bowl of ramen without even taking his helmet or goggles off. And no matter how tired they were, three typhoons were steadily closing in on Nepal from the Indian Ocean, threatening to close the window of opportunity with a month of storms that would drop ten feet of snow on the Everest base camp only ten miles away.

Despite the anticipation and excitement of the crew’s early successes, the true nature of the Himalayas would test the riders to the absolute limits of their talent, experience, fitness, and mental fortitude. “We couldn’t come to Nepal and expect it would give this to us that easy,” Jeremy said, thinking back on the expedition. Luca put it more bluntly. "The only thing you can expect in the Himalayas,” said Luca, reflecting on the expedition, “Is to not be successful in what you do.”

The Shangri-La Expeidtion & TGR would like to thank their sponsors - O'Neill, SONY, Clif Bar, Patagonia, Swatch, and Jones Snowboards - for supporting this once-in-a-lifetime expedition.