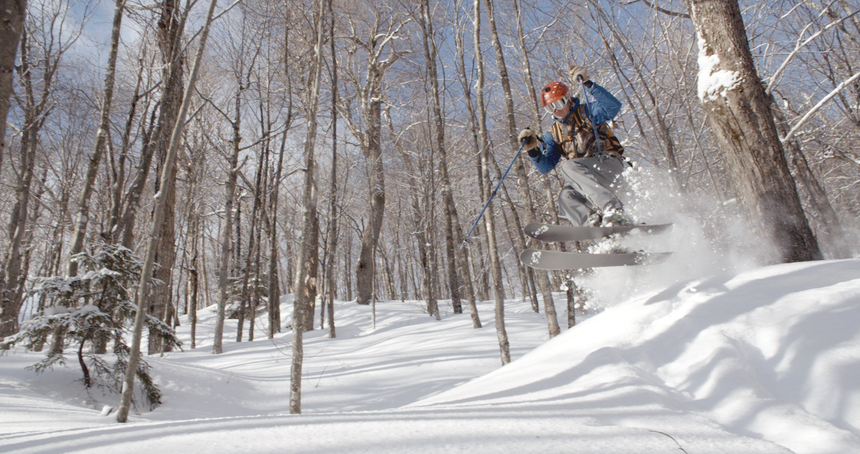 If you asked a group of Vermonters where to spend a few days skiing while passing through the Green Mountain State, there are a handful of towns and resorts you would likely hear ad nauseum. Stowe, Killington, Sugarbush and Jay Peak would all likely be represented en masse in the responses while other spots like Mad River and Okemo and Smug's may also be peppered in.

One spot you're not likely to hear? The town of Rochester, Vermont. But a group of resourceful backcountry advocates is trying to change that by hand-carving some of the best backcountry skiing in the state into the peaks surrounding the Central Vermont town.

Five years ago, Angus McCusker and a group of close friends started the Rochester/Randolph Area Sports Trails Alliance (RASTA) after what he described as a "late night brainstorm over some beers." The group was a collection of likeminded skiers who all enjoyed venturing into the backcountry, but wanted to find a way to help others enjoy that same feeling.

"We all had some stashes we liked," McCusker told TGR. "But we wanted to know, 'What can we do that will extend beyond us?' You know, Rochester is about 45 minutes from Killington and Saugarbush, but it isn't a ski town. We don't get a lot of economic visitors from skiing in the winter, even though people are always driving through town to get to other ski areas."

McCusker and his groups wanted to do something that would "make a positive impact on the local economy" but that they didn't know where to get started. The group wanted to find a way to open up the backcountry scene as an attraction to those outside the community, but at the time, McCusker described the backcountry environment in Rochester as "hush hush." 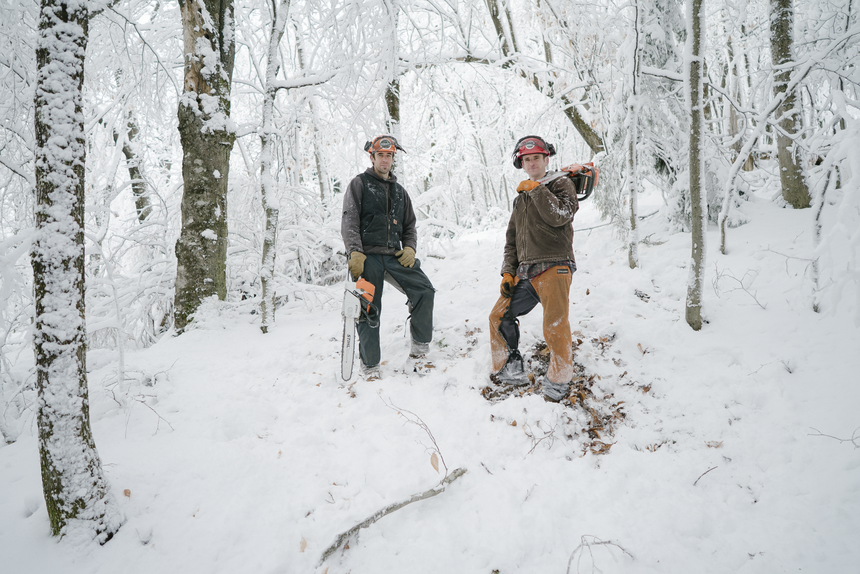 The crew at RASTA didn't just identify areas ripe for backcountry skiing, they actively went about getting their hands dirty and clearing lines themselves. Marius Becker/Leave Nice Tracks photo.

And so, following the first-ever Vermont Backcountry Forum, McCusker and others formed the Vermont Backcountry Alliance (VTBCA) to exist as a partner program of the Catamount Trail Association (CTA), the state-run program dedicated to developing recreational opportunities off the 300-mile Catamount Trail which runs the length of the state to the Canadian border. McCusker and RASTA were the first backcountry chapter to partner with the CTA.

"We recognized we needed to organize as a state advocate for backcountry skiing so that the sport was well-represented in the state government and our interests were protected," McCusker told TGR. "Without a governing body to help oversee the expansion of backcountry trails, you saw the extreme of what could happen at the Big Jay Trail back in 2007, when someone carved a bunch of illegal trails in the middle of the night."

Because McCusker and RASTA were able to organize, he says they were able to be successful in lobbying for state funds to expand the backcountry trails around Rochester.

"When RASTA was founded, the Forest Service said they wanted to potentially include vertical oriented backcountry skiing in it," said McCusker. "There had been people asking about doing what we did for years, but because we were organized and had multiple people in our group with experience in land management, we broke through." 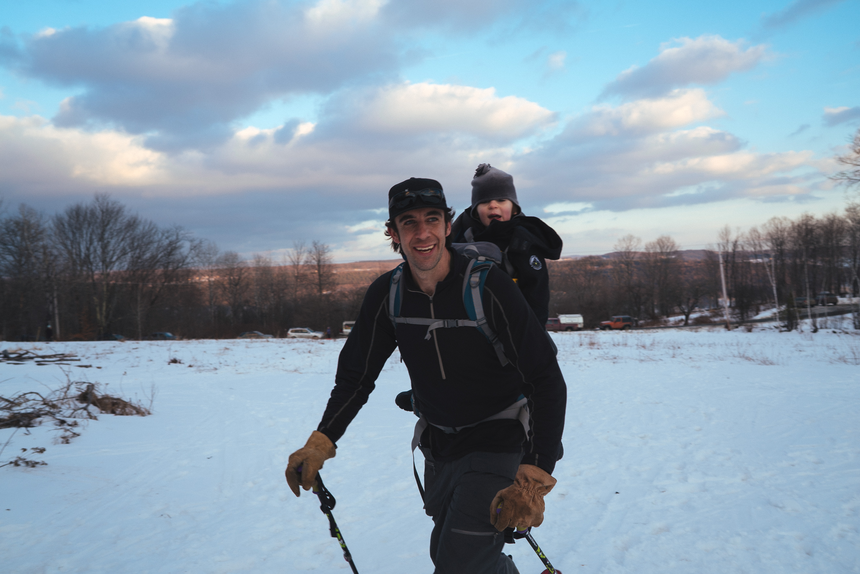 Unlike in other areas of the country where pristine backcountry terrain is naturally occurring, the terrain surrounding Rochester is densely wooded to the point that skiing it would be near impossible. And while it might seem counterintuitive, thinning some of the growth in areas that are overgrown is actually beneficial to local ecosystems. And preserving those ecosystems is of utmost importance to RASTA

"We have such a wide team of scientists and biologists working with us looking out for endangered species and telling us 'don't cut here, don't touch this,' that we're helping the environment," the 36-year-old McCusker told TGR. "When people are cutting on their own and doing illegal logging, they don't know any of that, but when you work with the Forest Service you do. I'm a firm believer in creating backcountry some areas and letting other places stay wild. Our primary management plan is to improve wildlife habitat and our secondary plan is to make better backcountry skiing trails."

With those concerns at the forefront of their minds, the crew at RASTA went to work, spending 3,500 hours manually thinning a series of trails in the areas surrounding Rochester, culminating in 2016 with the unveiling of their most audacious project to date–the Brandon Gap trail system–which links 20 backcountry lines and nearly 20,000 skiable feet of vertical accessible directly off Vermont Route 73 in Rochester.

And it turns out they were actually able to make a positive economic impact on the area. 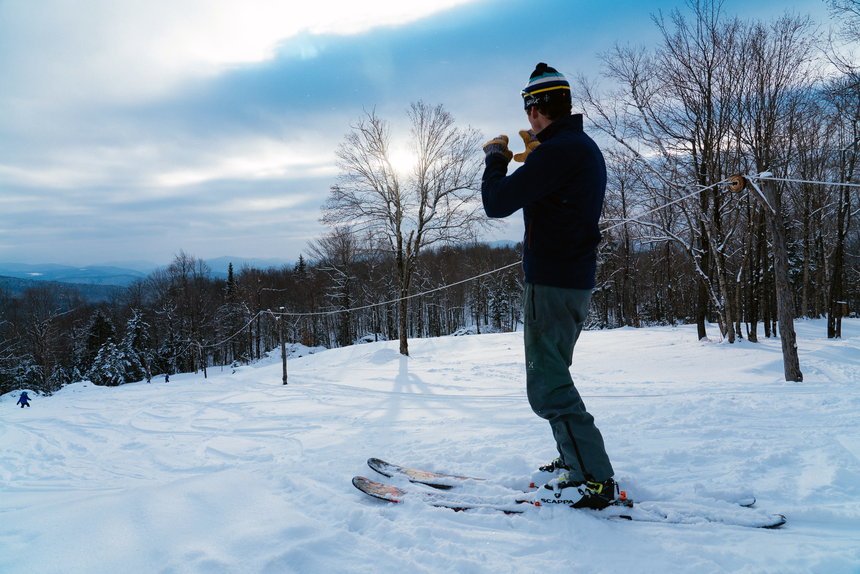 McCusker's love of skiing extends beyond the backcountry: He's built a tow rope in his own backyard to help pass on his love of skiing to his kids. Marius Becker/Leave Nice Tracks photo.

"Over President's Day last year, before we had even finished Brandon Gap, we decided to have a monitor trail use with trail counters to see how many people used our system," McCusker told TGR. "We had 170 people use the trail a day, and we were able to estimate the economic impact of that at $199,000 from that weekend."

Now McCusker and RASTA's efforts are being profiled in the forthcoming ski documentary Leave Nice Tracks, and McCusker says their goal is to simply continue to grow backcountry offerings.

"We've partnered with the Vermont Huts Association, which is a new organization looking to create a hut-to-hut experience in Vermont, and we're hoping to be a part of that," said McCusker. "It's all kind of coming full circle and going back to the way it used to be back in the 1930s when you had the Civilian Conservation Corps cutting trails throughout the state. It's getting back to the notion of earning your turns and getting out on your own."