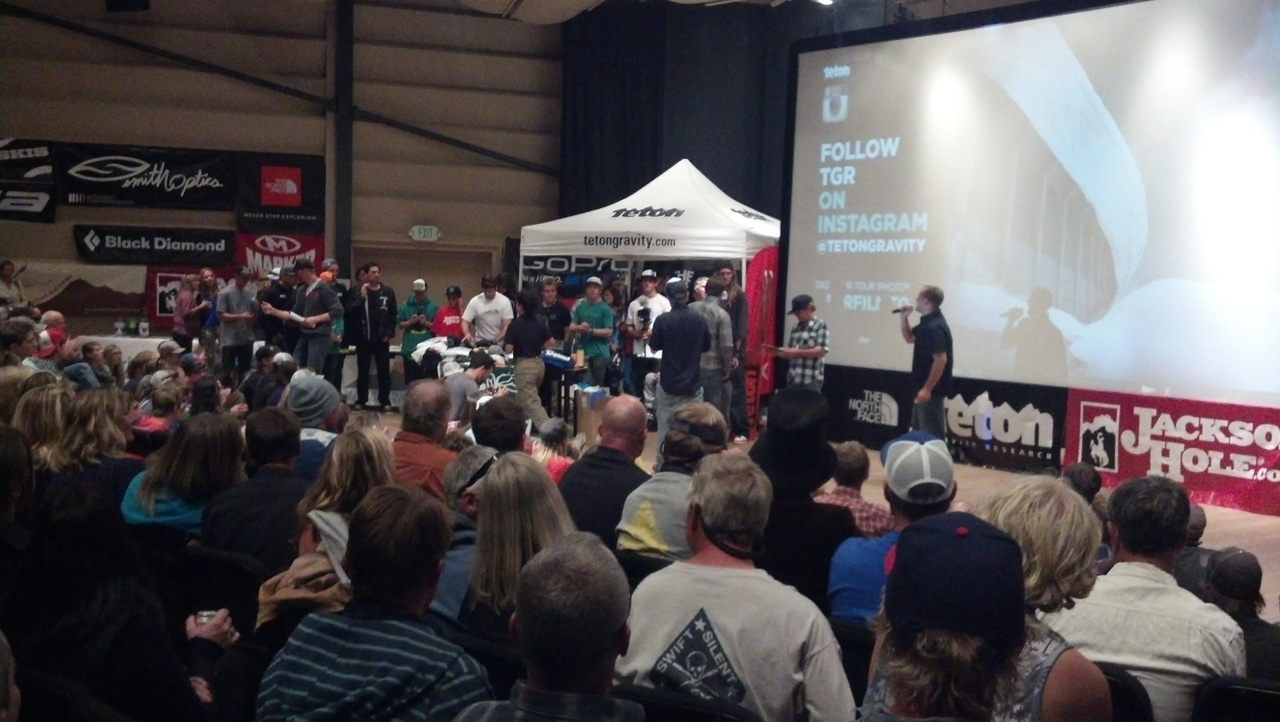 On Saturday, Teton Gravity Research premiered its newest ski and snowboard film, The Dream Factory, to a few thousand fired-up fans at the base of Jackson Hole Mountain Resort inside Walk Festival Hall.

The party kicked off around 3 p.m. with free beer and yard games in front of the TGR production office, right next to the JHMR tram. Yes that’s right, free beer next to the tram. As fans tossed back cool ones on the warm, sunny afternoon, Erik Roner, Ian McIntosh and Marshall Miller buzzed over Teton Village and jumped out of a plane, skydiving in to the venue with smoke trailing off their feet. All three stomped their landings in a rather tight common area between The Mangy Moose and Hotel Terra. That kicked the crowd in to high gear, and the vibe ramped up from there. 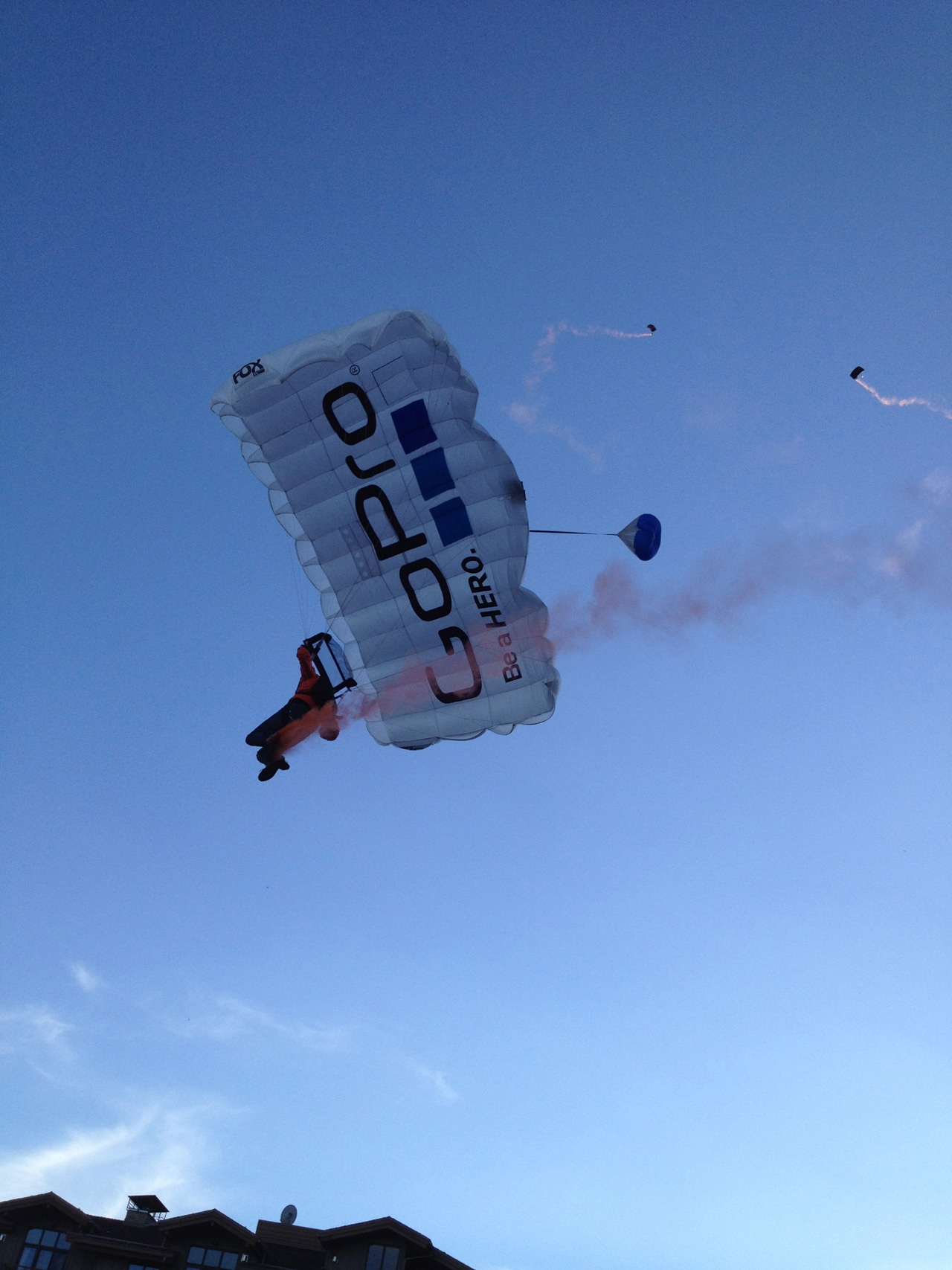 Marshall Miller, Erik Roner and Ian McIntosh skydive in to the world premiere of The Dream Factory. 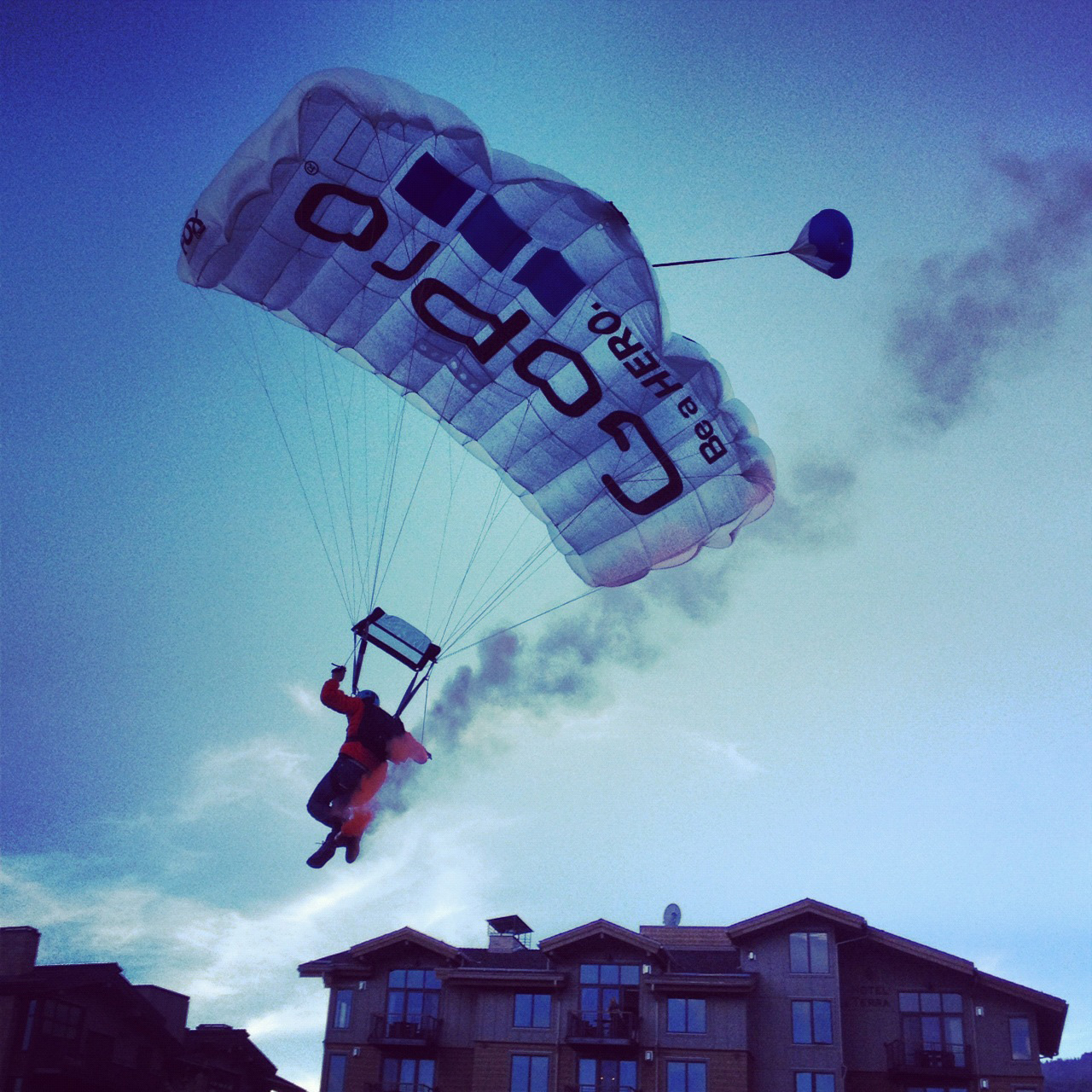 Marshall Miller gets ready to stomp his landing.

To accommodate all the fans who want to see the movie, each year there are two showings of the TGR movie – the early show and the late show. The early show is a bit mellower and the late show is rowdy. With about a thousand people in line to the venue, you could feel the hype in the air. Screw it if it’s still summer – the TGR premiere marks the beginning of winter in the Tetons. There you are, back at the base of the ski area with all your winter friends celebrating the act of sliding on snow. It’s an extraordinary feeling of camaraderie.

There was a mass amount of giveaways from TGR sponsors like GoPro, The North Face, Atomic, Marker, Volkl, Scott, DNA, Smith Optics, Black Diamond and The Ski Journal. 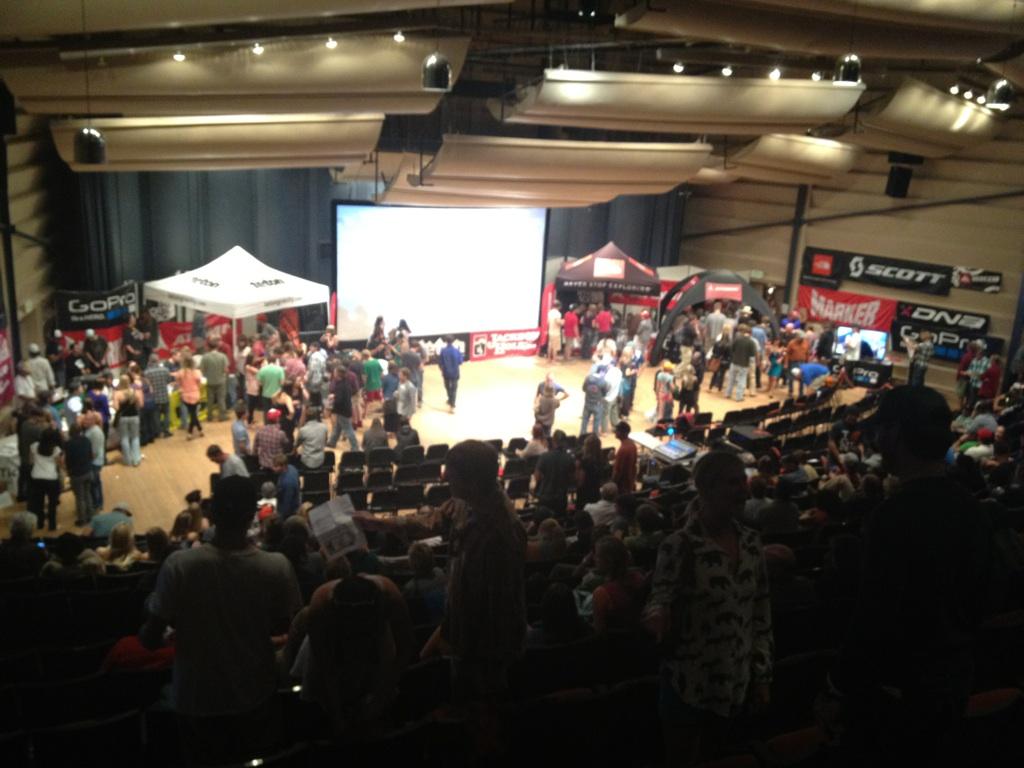 The scene inside Walk Festival Hall. 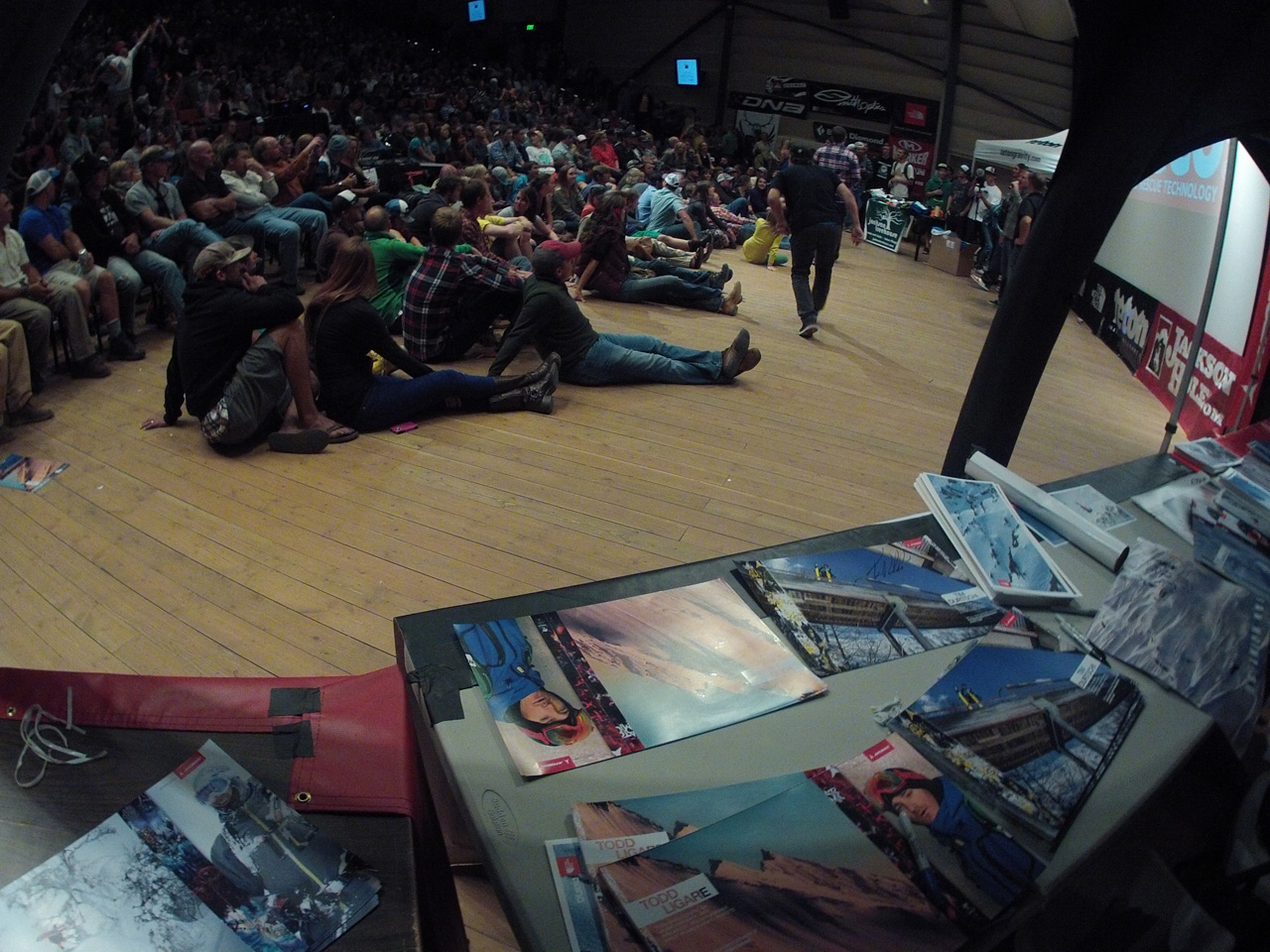 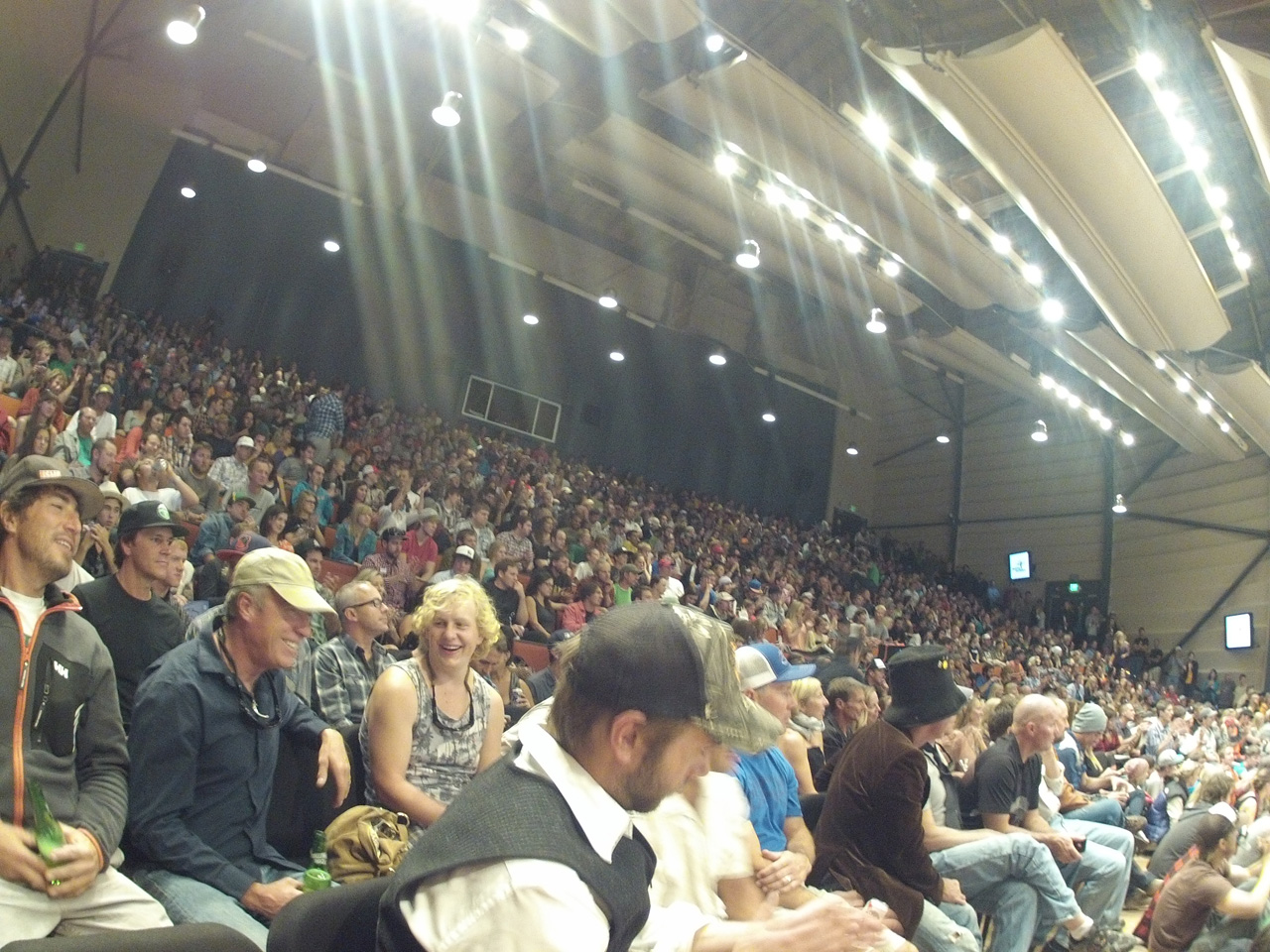 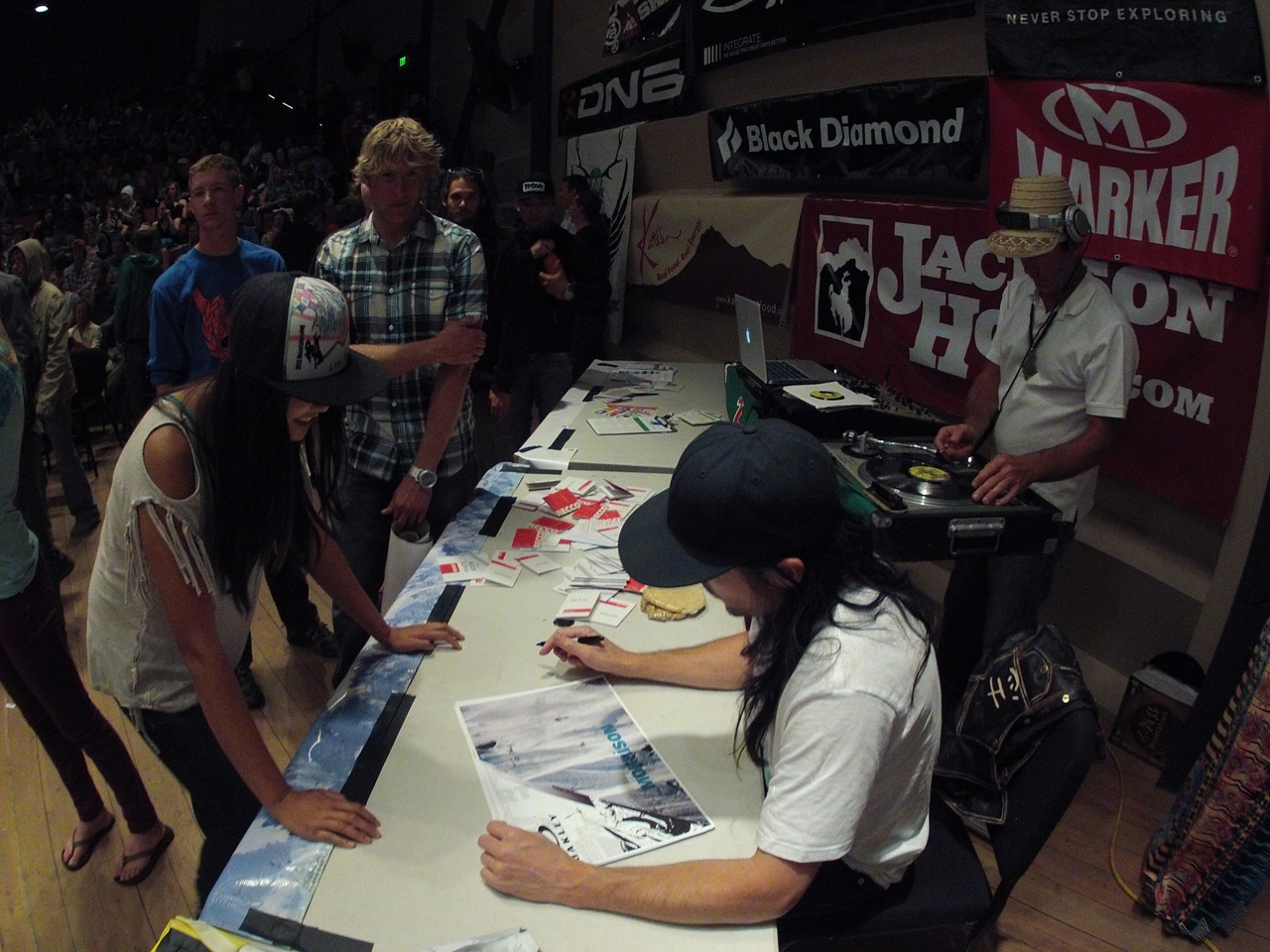 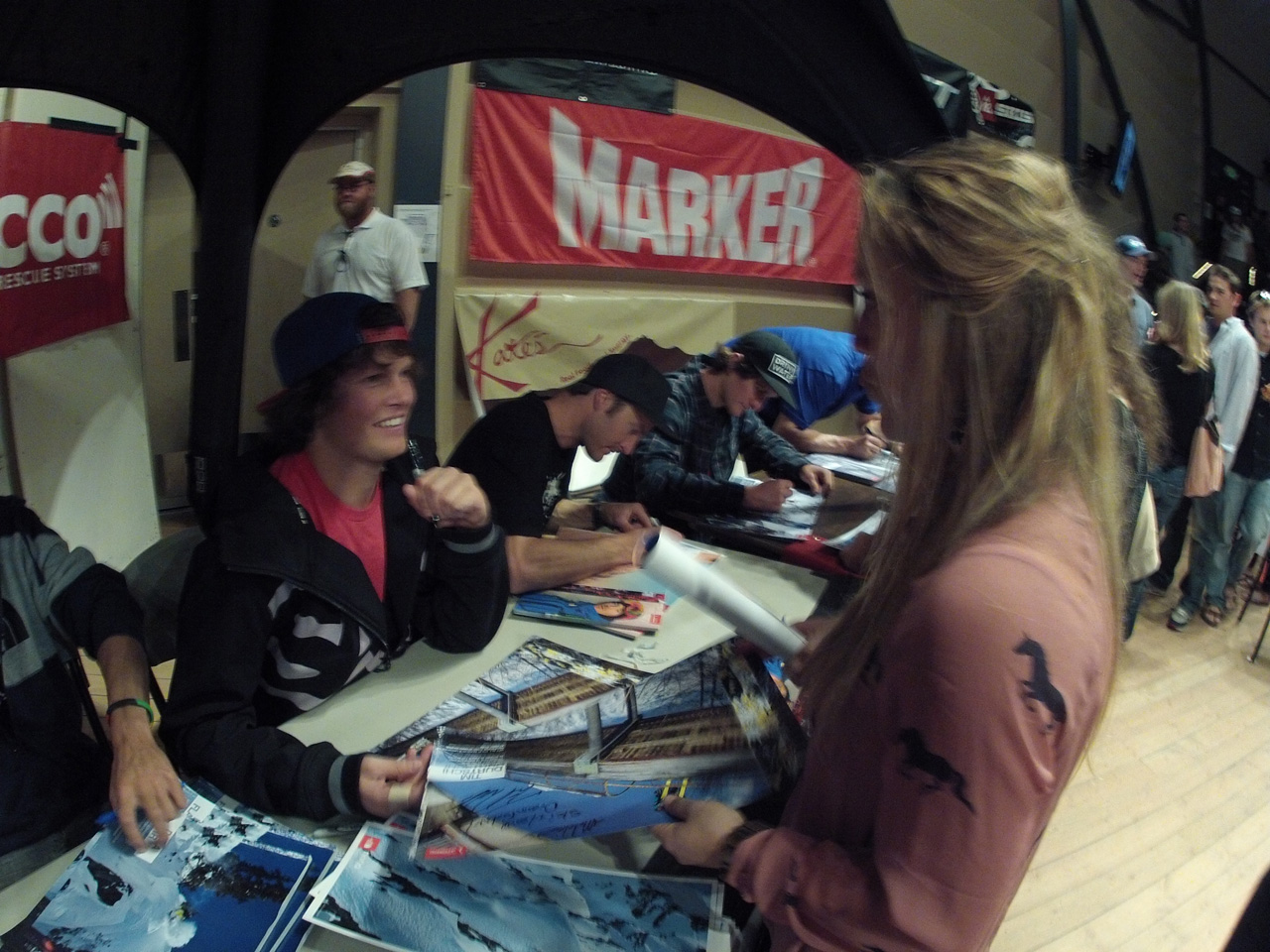 Tim Durtschi interacts with a fan. 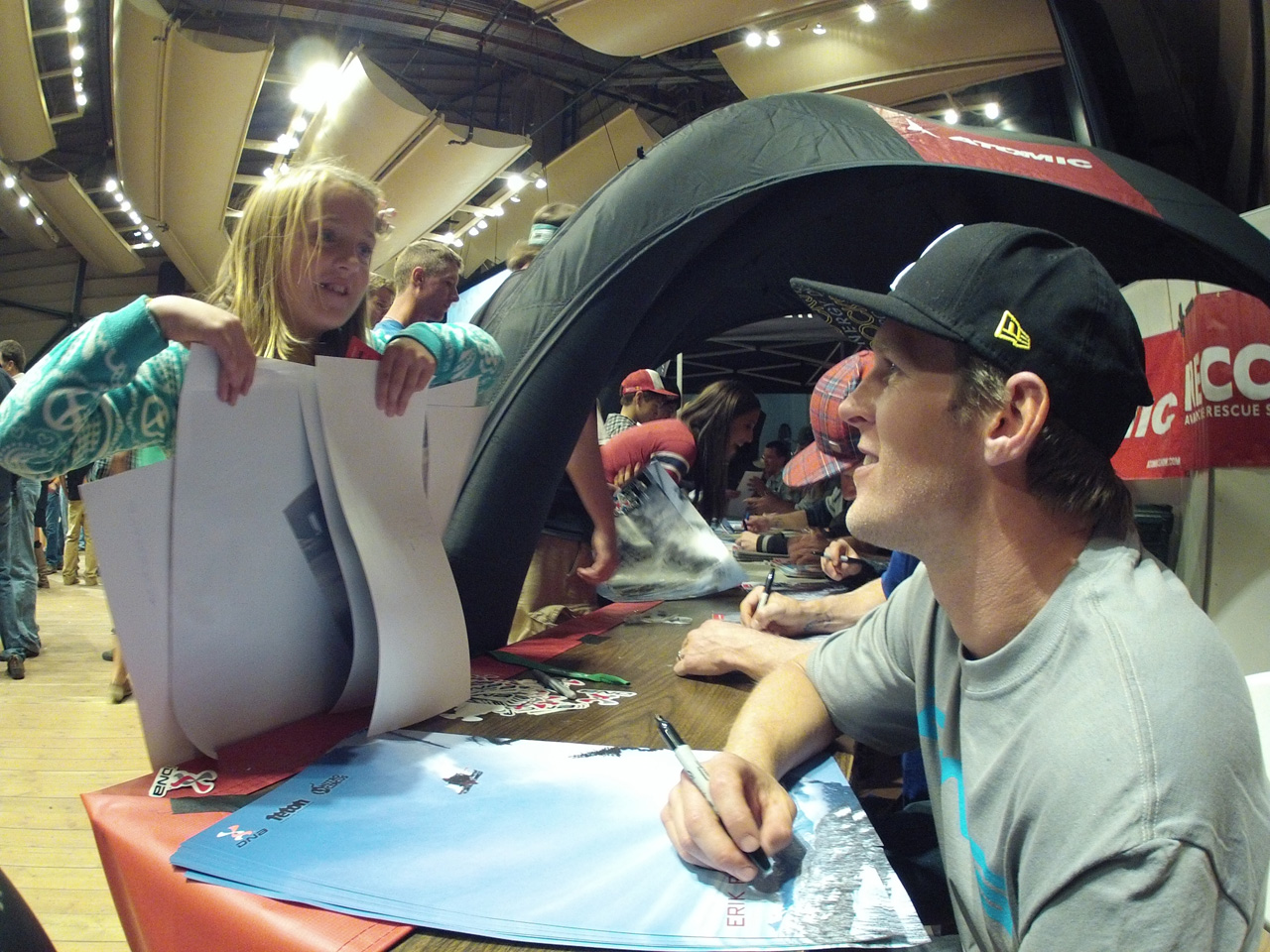 Erik Roner gets the youth fired up to ski.

The film looks back to the roots of the freeriding movement in Alaska while at the same time looking to the future of the sport. In that sense, it was very cool to see members of the Jackson Hole Air Force as well as kids from the Jackson Hole Ski and Snowboard club together in attendance. It made for a cohesive vibe where people of all ages were celebrating just how freaking awesome it is to soar down the mountains on snow.

The film layers the most current ski footage from Alaska with historical clips. Really, two stories are told – that of the new freeriders and the pioneers before them. In all, the film shows the progression of skiing and snowboarding in Alaska, The Dream Factory. 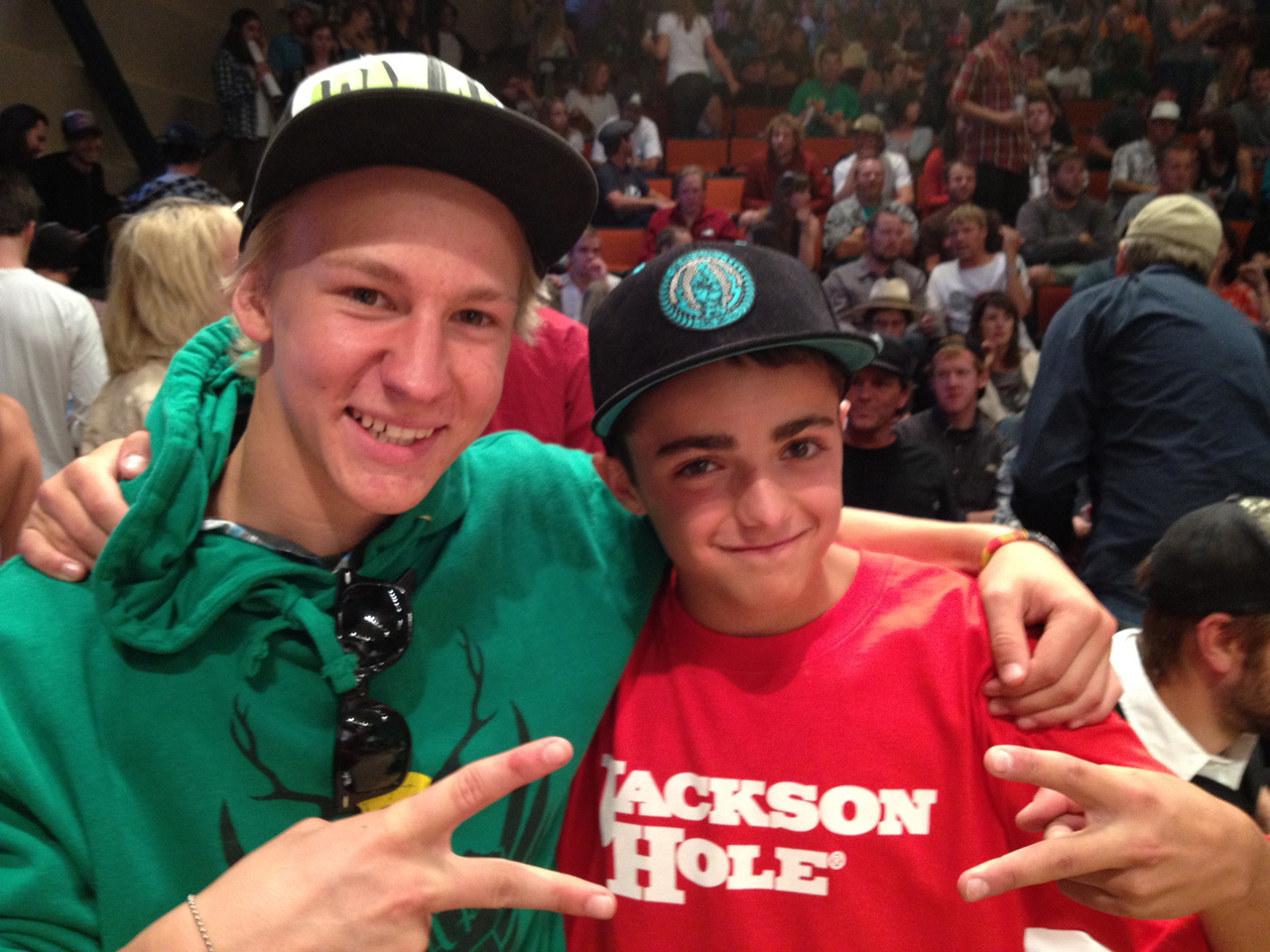 One technique used this year is side-by-side footage of skiers shredding lines back in the day matched with people skiing the same lines now. Seeing this, you realize how far the sport has come and how monumental it was when people accomplished those feats for the first time. A couple of memorable moments like this come when you see Ralph Backstrom ride a line in Valdez made famous by Johan Olofsson in Totally Board 5. And when Colter Hinchliffe shreds a line in Haines called Dr. Seuss, made famous by Jeremy Jones. There are other stand-out performances by Tim Durtschi, Dash Longe, Dana Flahr, Daron Rahlves … Well, everyone pretty much crushes it – it’s a TGR flick.

Not to be missed is the heavy hitting Corbet’s Couloir segment at Jackson Hole Mountain Resort. There, John Spriggs kicks off the session with a huge back flip into the line followed by the likes of Daniel Tisi, who, at the age of 13, airs into the line larger than most grown men ever have. In almost every segment the viewer is shown the past, present and future of skiing and snowboarding. 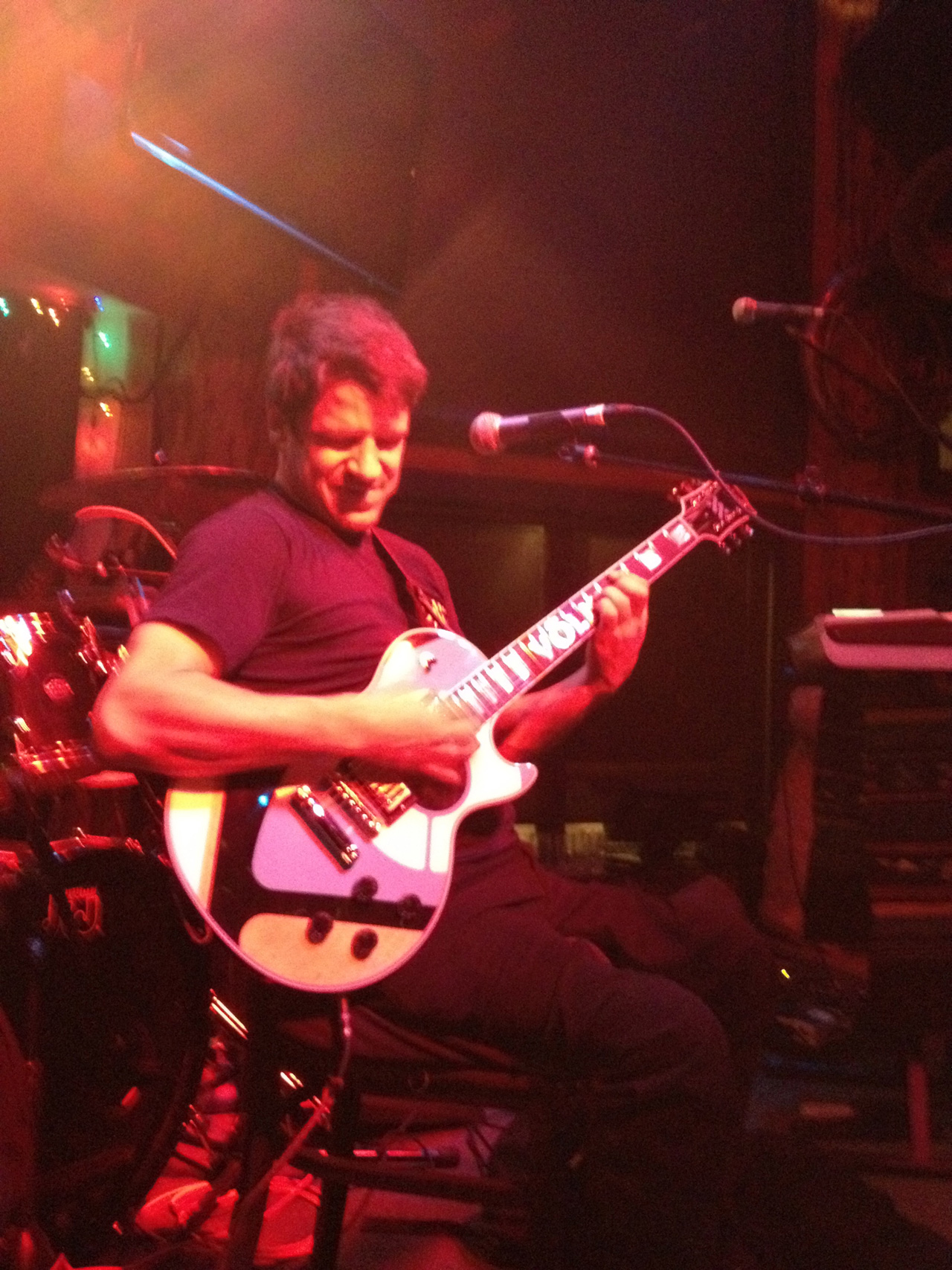 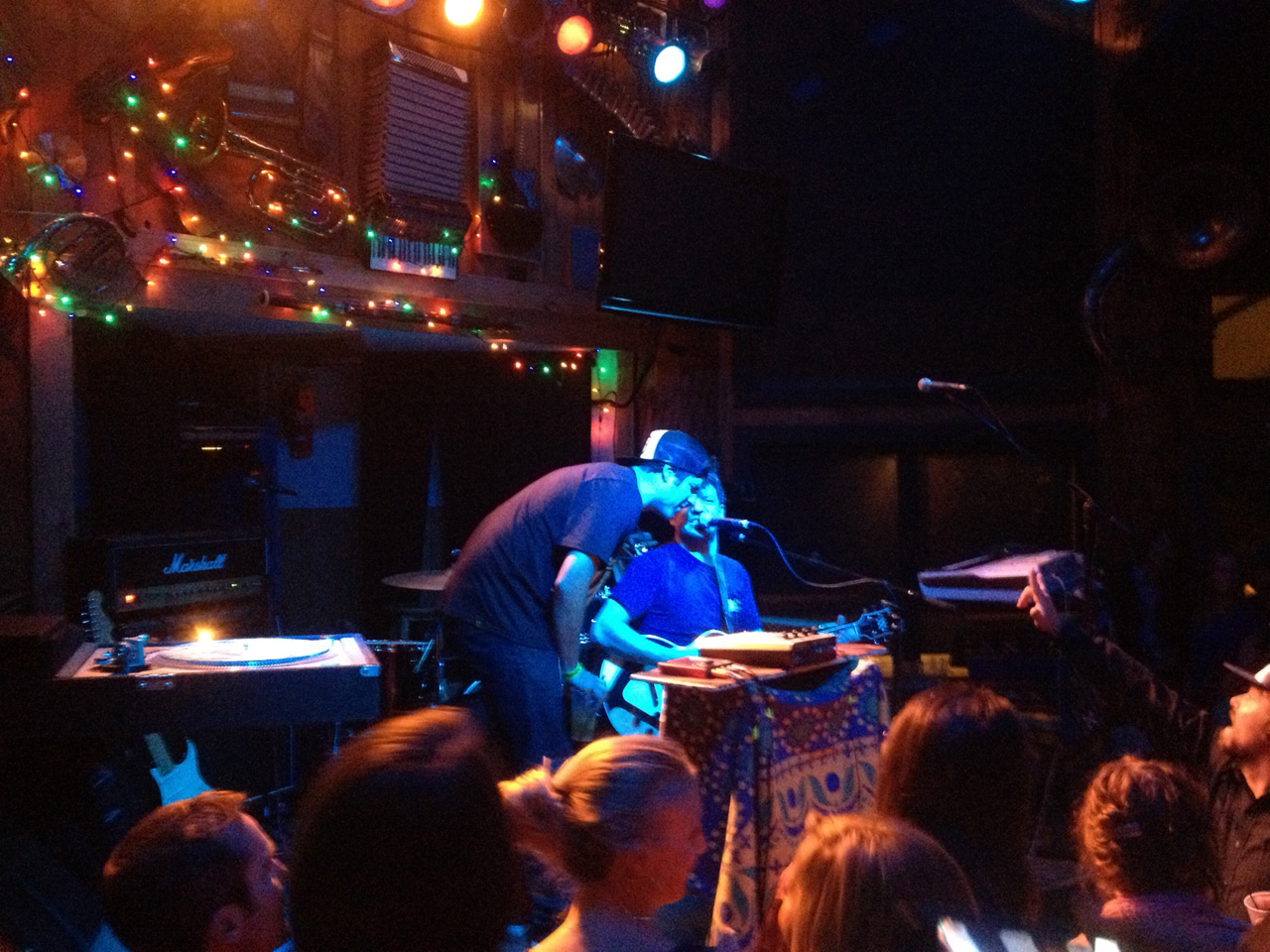 After the movie a party raged at The Mangy Moose. TGR skier Marc-Andre Belliveau – who last appeared in Lost And Found – played an acoustic set as an opener for the headliner American Royalty. While American Royalty rocked hard – playing a triple encore because the crowd would not let them off stage – perhaps one of the best moments came when Dash Longe joined Marc Andre on stage for a rendition of “ 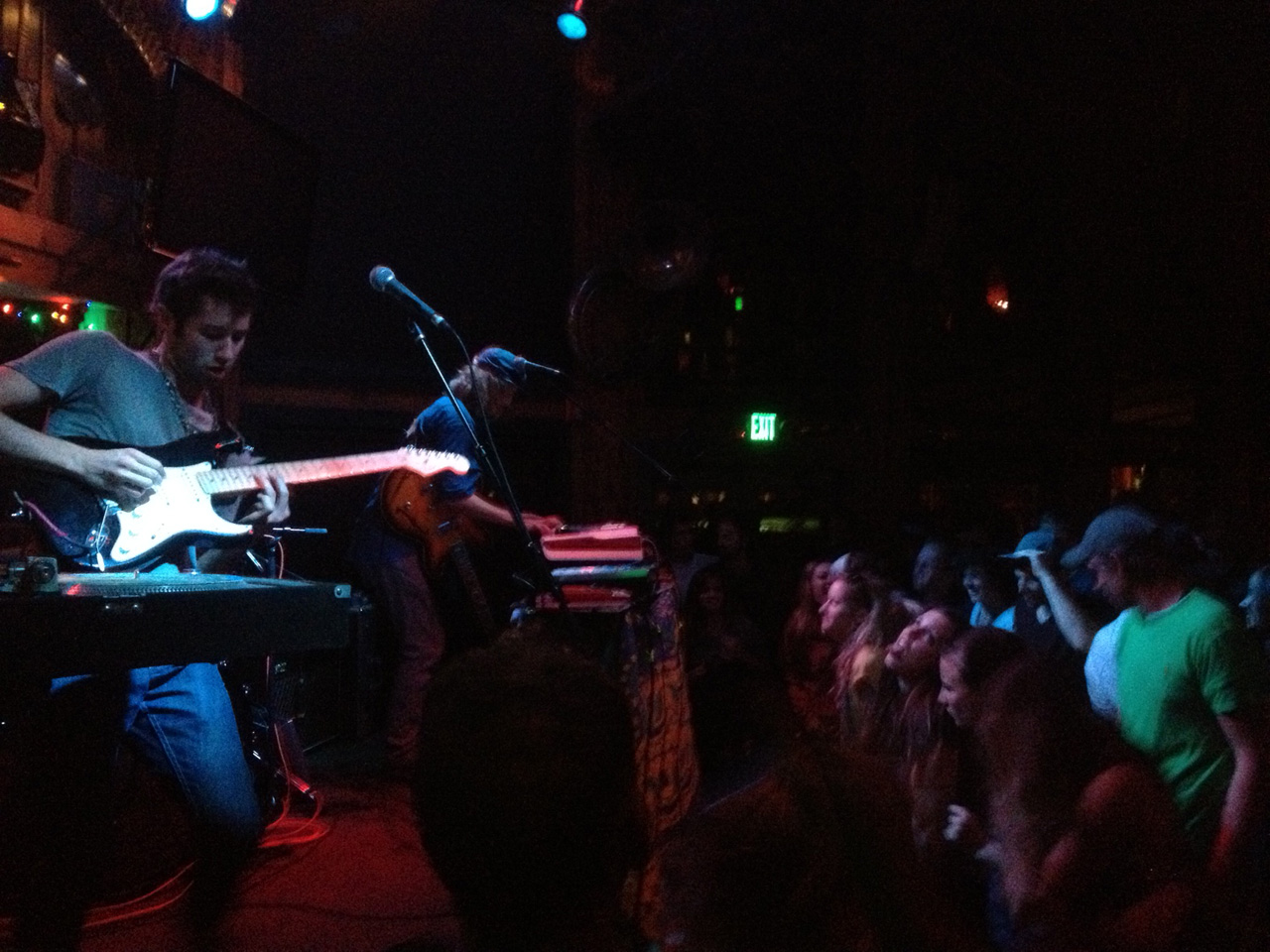 Go To A Premiere Near You

Go To The Dream Factory Page