We Loved this Snowboarder's Journal Entries from Chile 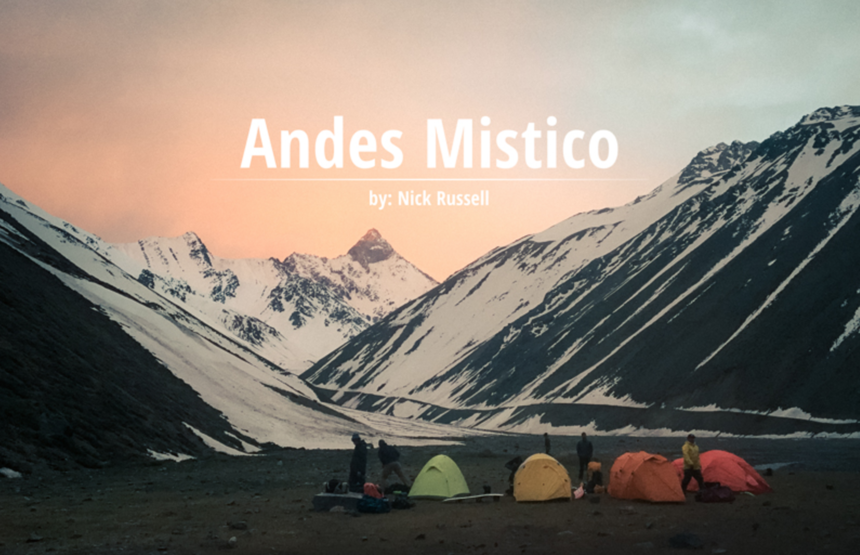 I first fell in love with this country on a virgin visit in the summer of 2015. The addiction and incentive to return to Chile was instantaneous. At first glance, the appeal is obvious. It’s been a long, dry summer that has led like-minded snowy souls to seek out endorphin releases through various forms of rock, water, and dirt.

Through the looking glass, the simple act of snowboarding is always the primary motive. Ascending a mountain under one’s own power in order to stand sideways and glide down gives an unexplainable feeling of purpose. Yet, however infatuated I may be with the up and down motions, I’ve come to realize that the more I travel, the riding is merely the justifiable excuse to book that flight. It is the unknown that draws us in. 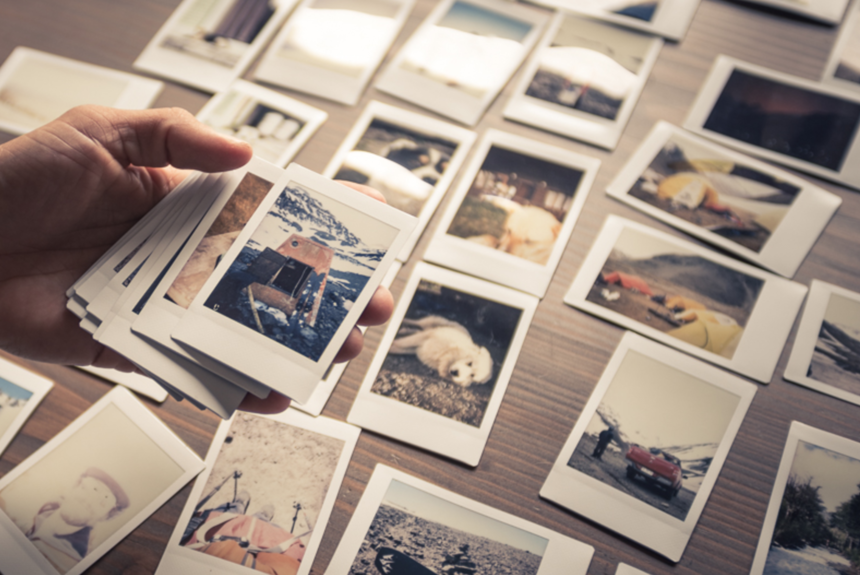 The gamble of flying thousands of miles from home simultaneously keeps expectations humble but hopes limitless. It's the unpredictable weather, endless terrain, friendly locals, language lessons, delectable food, dangerously tempting piscos & uncertain itinerary that has driven me back to Chile. 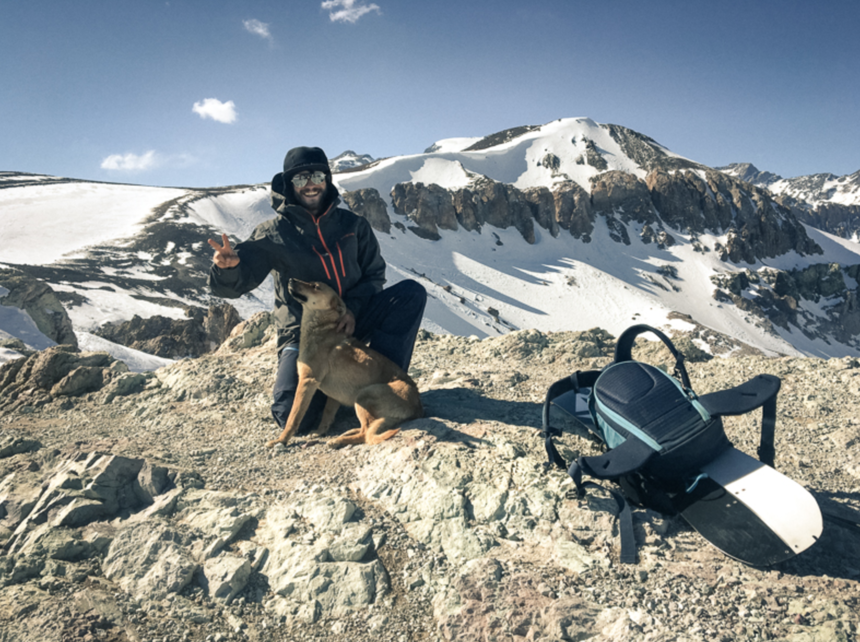 Roughly 24 hours after departing my home in Tahoe, I find myself back in a familiar setting. I move along the scree-covered ridgeline and the realization sets in. There is no other place I’d rather be right now.

Upon reaching the saddle east of Falsa Parva, I see a four-legged creature beyond the bend. Not a soul in sight, I walk closer to find a purebred Chilean mountain dog. Coincidentally, this is the same exact mountain where I came across another random dog atop the peak, one year ago. A warm and furry greeting from my new amigo. 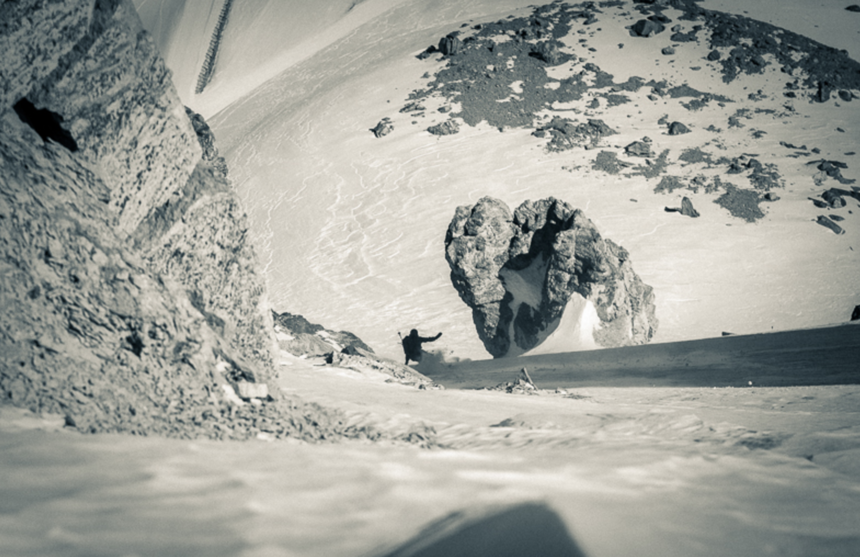 At a lusciously green farm house across the street from the ocean, spring has sprung its arms wide open with a shining sun. Over dinner one night, our gracious host, Coco Puig, describes the negative impacts of the farm raised salmon fisheries in Chile. He tells us that this non-native species and its demand is causing widespread resistance among the locals throughout the coastlands.

Generations of fishermen are losing their jobs, pristine shoreline is becoming tainted with construction and nets are being placed only 1 kilometer out from Coco’s home break. Farmed fish are fed with pellets containing antibiotics. All throughout the towns along the beaches, black flags wave with a fish skeleton, stating their proud affirmation, “No a las Salmoneras.”

September 16th - Return to the Mountains 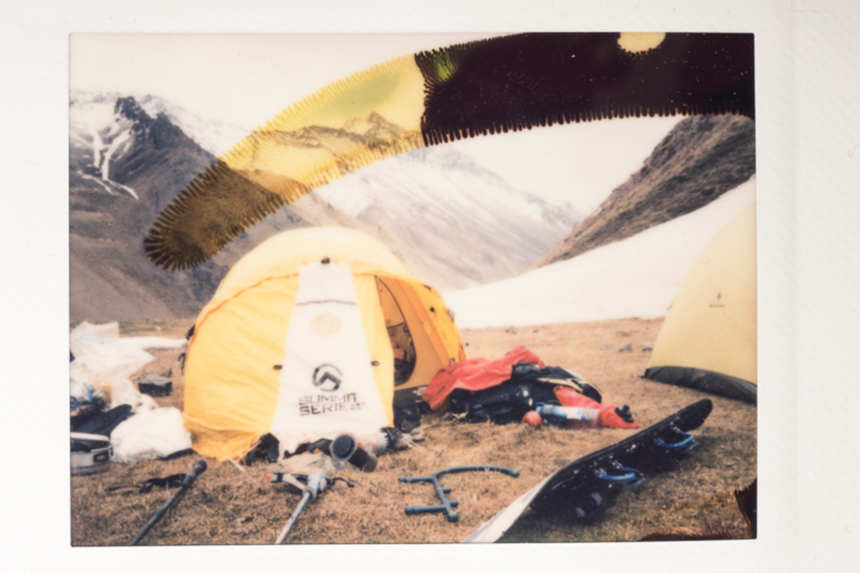 “I wake to sounds of pelting graupel falling on my tent through the night. I unzip the door during moments of silence looking for stars, but no luck. The forecasted tormenta proved valid as I drift back to sleep until I can no longer pretend. We share jokes and stories over coffee and fried bananas to pass the time.

Mid-day anxiousness reaches the tipping point and we set off towards the peaks that are surely as far away as they look. A winding approach through a glaciated ravine filled in by a massive slide path revealed the ruggedness that is the Andes. This is big country. 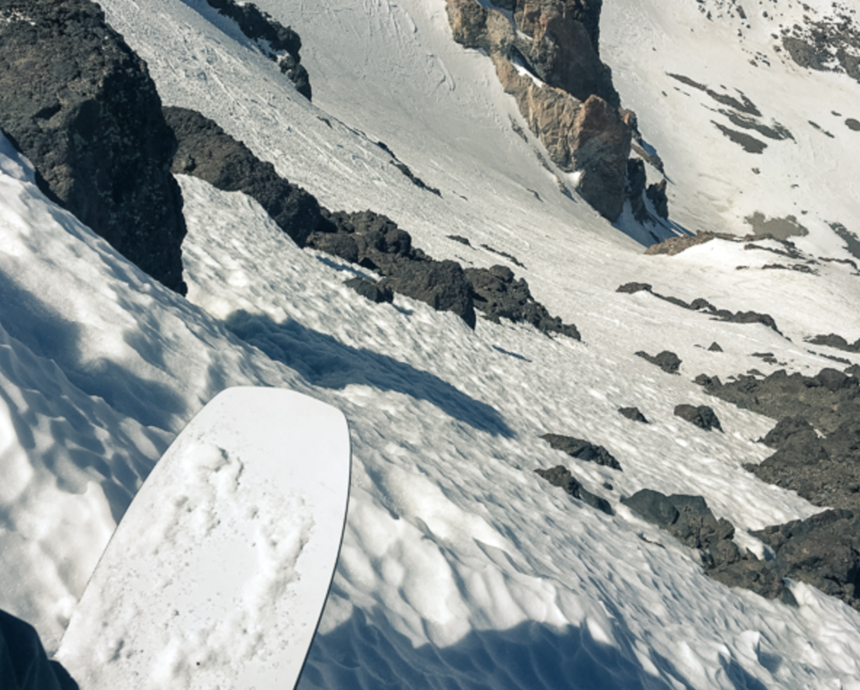 A view from above. Nick Russell photo.

Hoy es el dia de Independencia en Chile, the largest holiday of the year. The law says that every house must hang a Chilean flag. It's a ghost town along the road from Santiago back up into the central Andes range above Farellones. After salutations with the crew, I am now the sole gringo on this mistico tour.

Using the lifts at La Parva to bump me into the high country, a long walk up the rocky ridgeline to 13,000 ft awaits. To the West lies Santiago down the valley below as I stand on the edge of raw beauty. I came up here to get a view of Cerro el Plomo, a nearly 18,000 ft beast to the East. The sight of this thing is jaw dropping. To get more acclimated, I lay down for a short rest against my pack and fall asleep for an hour. I rise to a soft, sun cupped edgeable line through rocks and into a wide hour-glass coolie. Grande fiesta en la noche. 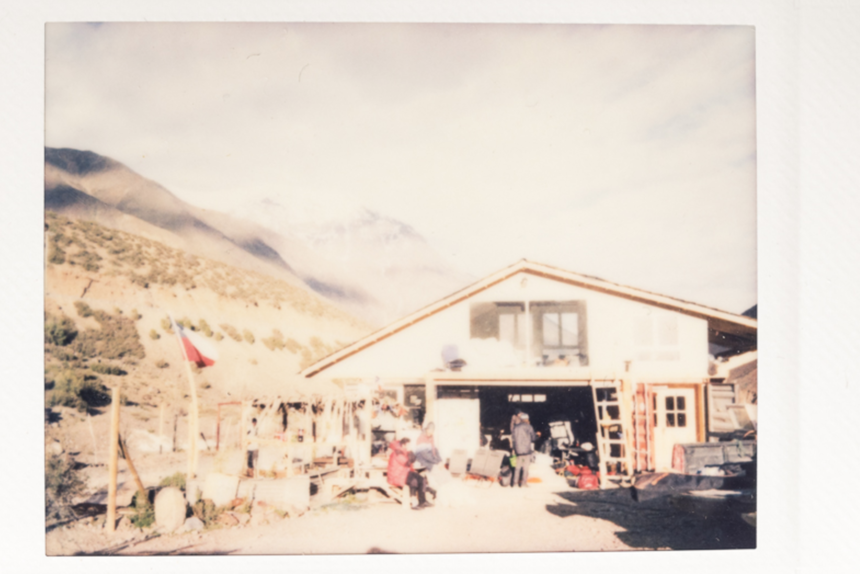 Rest day and pack for manana’s excursion. Plomo is calling. The Incas consider the mountain to be a sacred land, protecting its people living in its foothills. It was used as ancient burial grounds, where the mummy of a nine-year-old child was found near the summit in 1954.

Weather over the next few days is looking promising for a potential summit attempt. Internal thoughts question my physical prowess at high elevation. Curiosity is reason enough to pursue. The plan is to access the Cepo Valley via lifts at Valle Nevado. The river ascends directly to the base of the glacier, where Refugio Federacion is located. There I will make a base-camp and prepare for a long day upwards. 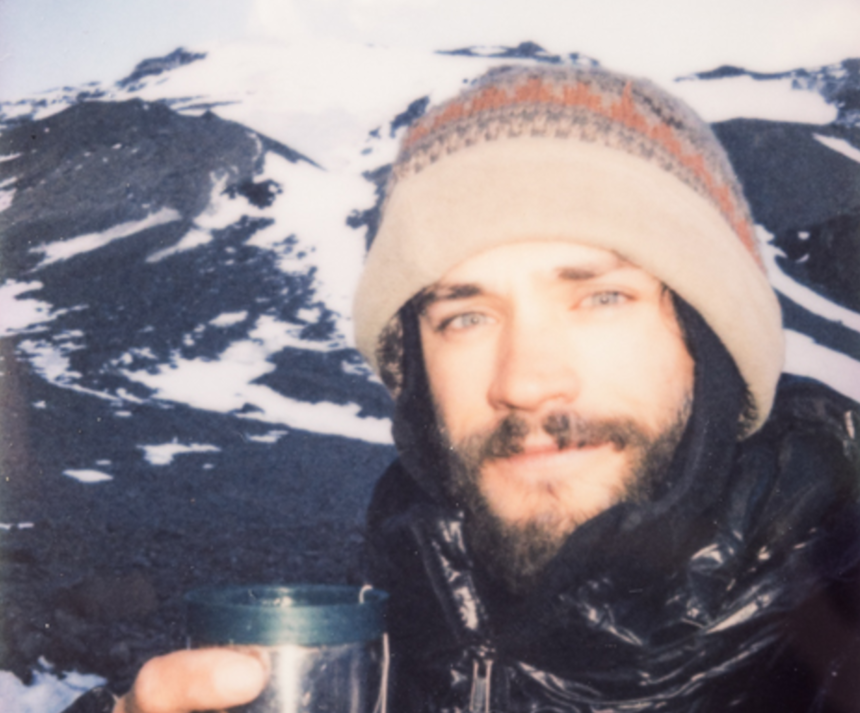 The day begins at 7,70 0ft where I hitch a ride to Valle and hop on the chair with my ridiculously large pack. Dropping in behind the Tres Puntas t-bar, I become committed to this solo adventure. Company would have obviously been welcomed and enjoyed, especially for safety reasons, but no one could pull the trigger on such short notice. I have emergency protocols in place with friends in town, they shall see me return by nightfall on Friday.

The approach traverses high along the north side of the valley to maintain elevation. I pass by what were once hidden cirques of mystery and add them to my future hit list. Stopping for breaks to alleviate my shoulders, I consciously slow my breath to take in the sounds. Rockfall, birds, the trickling river beneath the snow. I am in no rush. 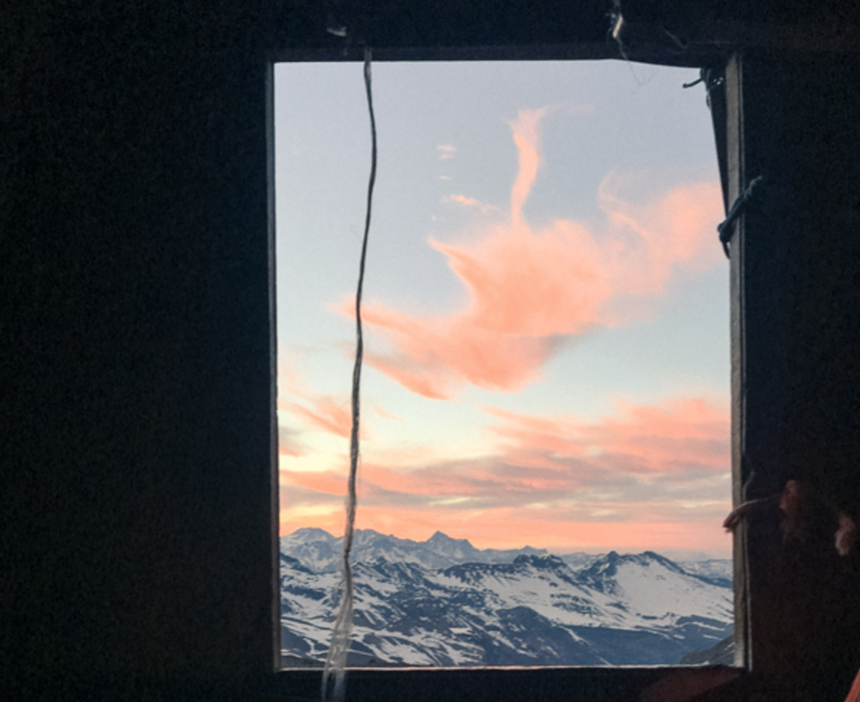 A view from the Refugio. Nick Russell photo.

6pm arrival to the Refugio, it looks like some sort of old orange submarine. I spend the evening boiling water for dinner and binge drinking tea. Prior beta indicated that the snow up here is less than ideal for drinking, as one may taste a sort of sulfury seasoning to their water. I can now attest to that. Looking out towards the peaks to the south, I am at peace sitting in this valued shelter. A blazing red smears the horizon line. 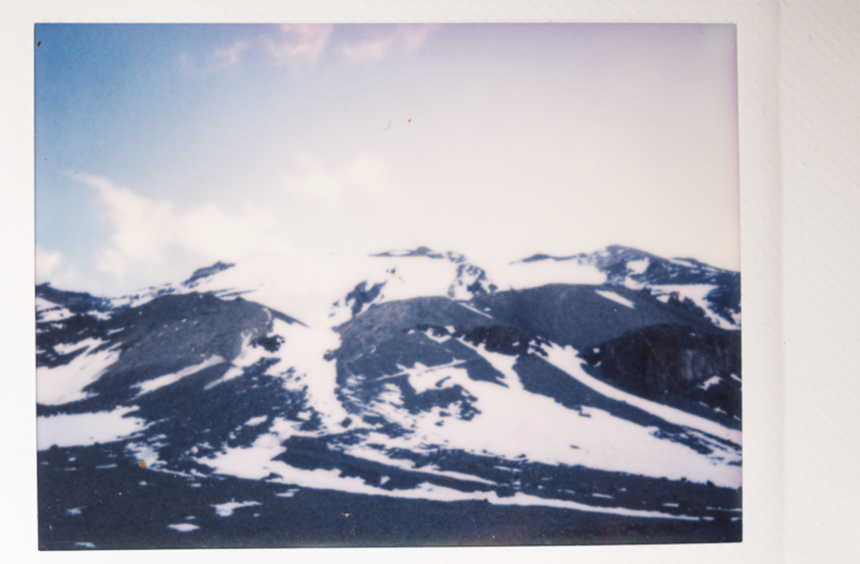 Perhaps the absence of wind seemed surreal, I did not sleep much last night. I wake to a sunrise, equally- if not more magnificent than yesterday's performance. I take my time getting going, as the southerly face I intend to ride holds light until 7 pm. Drinking as much lemon tea as possible, the sunlight hits basecamp and with it, brings a wave of motivation and encouragement. Water bottles full and snacks loaded into every possible pocket, I set forth at 9 am from 13,600 ft.

Upon reaching the first bench above camp, the foot of the immense snowfield stares one in the face. I opt for what is sure to be a summer trail, right of the steep icy slope, alongside the ridgeline that consists of loose rocks. Refugio Augustini is found around 15,000ft, with direct lateral views to a steep bright blue ice field. 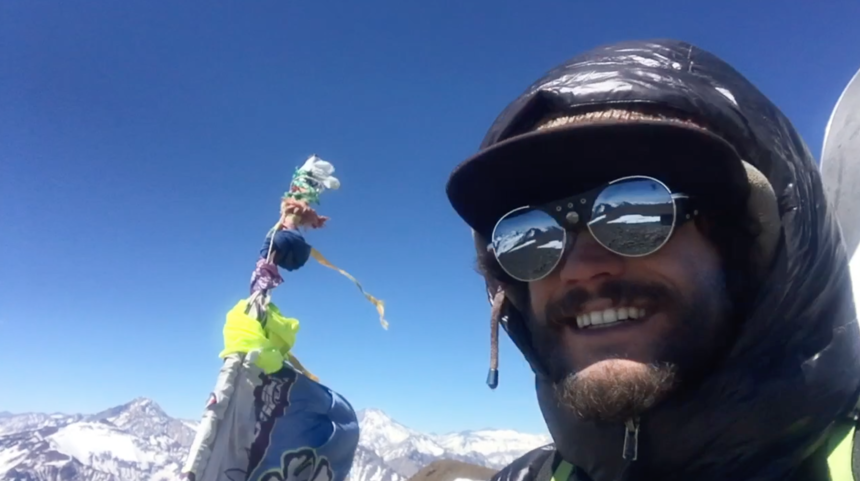 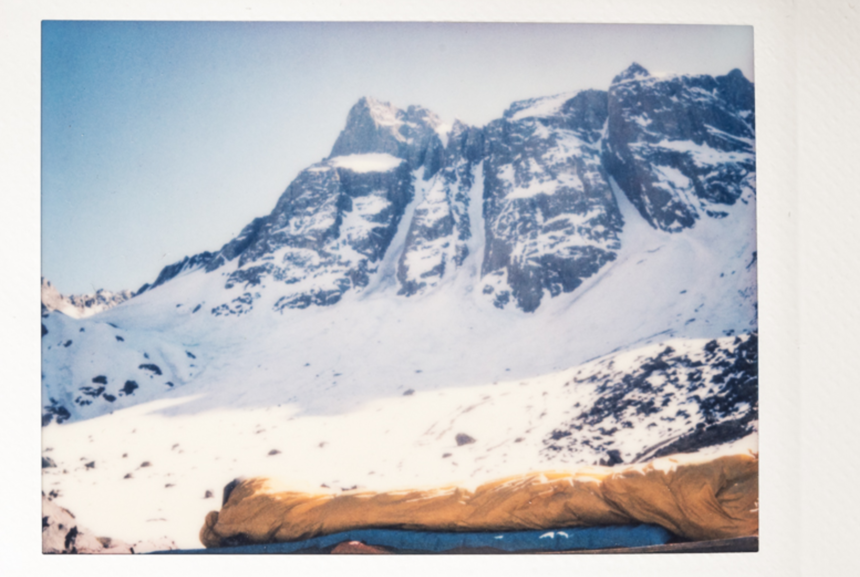 Five hours pass and the summit flags indicate I have arrived at 5,400 meters, just shy of 18,000ft. This new view to the North reveals a continuous paradise of the mountain range I love more each day. I see Argentina. I see the capital in a haze of pollution. I see the now seemingly tiny valley that I walked up yesterday. It feels as if weeks have passed since I’ve been up here. I suppose that is the power the mountains hold- A vortex which allows these memories to live forever. 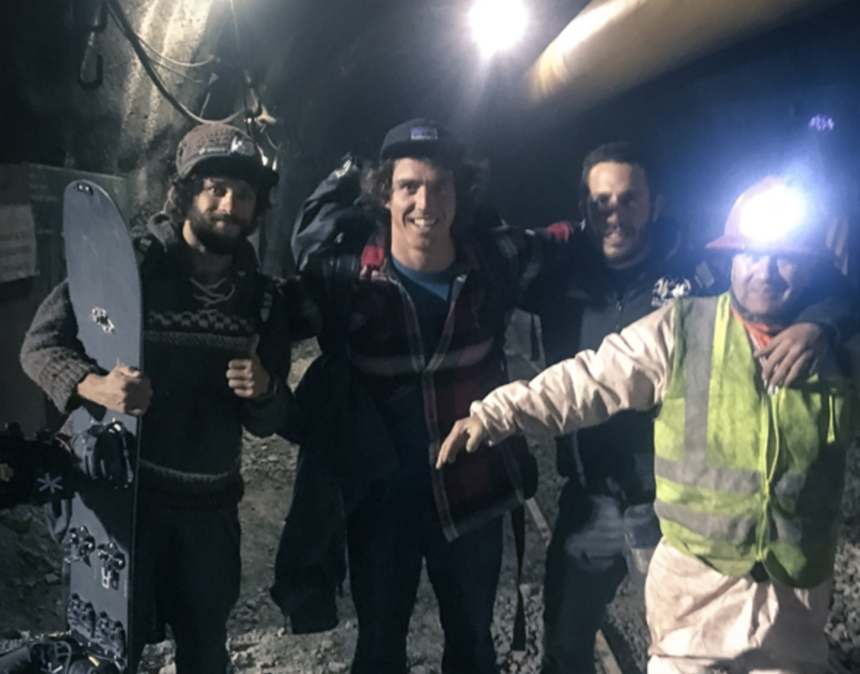 It is nearing 1 am and I'm violently awoken as the pavement turns to a rugged dirt road. My friend, Juan Martin, is driving us in what he calls his “city car” instead of his truck. The grade of the switchbacking road becomes steeper and we start to bottom out. “From here we walk,” Fede declares. My two amigos help me with my scattered gear, but they are only dropping me off at the top of the canyon and heading back down to Santiago. Roughly a five hour round trip through the middle of the night to do a favor for a guy they hardly know. That goes to show the kindness of the Chilean people.

Gingerly floating down the loose rock and talus hillside, lights, and a generator buzz become brighter and louder. Several minutes later, we are walking through the heart of a fully functioning hydroelectric dam, known as the Alto Maipo project.

This large scale operation is highly opposed by many around the country. There are several factors which fuel the fire for opposition to the Alto Maipo project, ranging from recreational to environmental impacts. As of recent, the dam operations have limited and restricted access into the high Andes. Several kilometers from the approach points to the terrain, the road is guarded by a security checkpoint, resulting in the need for a midnight arrival. This land which rests beyond the gate is worthy of a national reserve. It deserves to be protected and shared with the public.

Men with reflective vests and helmets smile and wave to greet us in the tunnel. We continue out from the dam and back into the darkness, dipping off the dirt road. Hopping over sagebrush and boulders, patches of snow finally appear in the warm night. By moonlight, an outline of a grandiose face presents itself on the back wall of the cajon. We have arrived. I find a flat area near their friend Seba’s stone walled hut and lay out my sleeping bag. 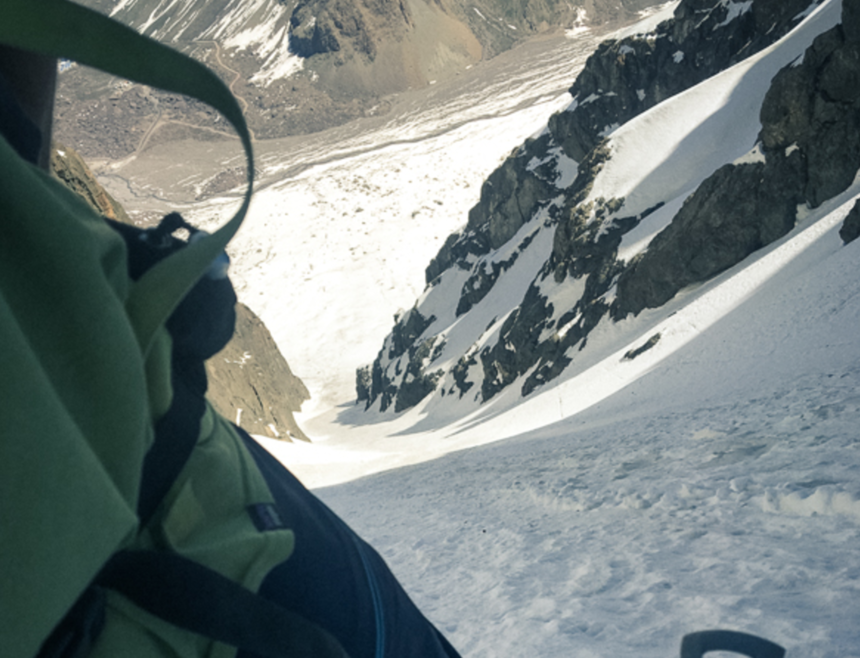 A long way down to the river. Nick Russell photo.

In the middle of the night, two furry creatures found their way to my star capped sleeping corridors. A puppy licks my face as I open my eyes in a dazed state of drowsiness. Am I dreaming? The sun rises only slightly over the peaks to the east, but it is more than enough to showcase the surrounding glory.

The walled line of choice once again exceeded my sense of scale. While it certainly proves to be as steep as perceived, the ascent takes almost twice as long as originally anticipated. Small rock chips wiz by, snapping me out of the sluggish climb upwards and into an alert mindset. Unique outcroppings of rock act as checkpoints, as I break for small sips of water or a nibble on a Honey Stinger chew.

Several hours pass and I reach the dead end atop this classic sustained 1000m line, stretching all the way down to the Yeso River below, where I filled up on water earlier this morning. I meticulously chip away a starting point for my drop-in. Each movement is carefully conducted. I’m sure not to drop anything, as it would be total devastation. Axe in hand, I enjoy the ride.

After visiting the Maipo Valley and seeing the massive terrain features with my own eyes, and having experienced the epic beauty of the valley I can truly understand why so many Chileans have stood up to the Alto Maipo Dam Project.

The dam diverts precious water from the Yeso lake, which provides drinking water to the majority of the greater Santiago Metropolitan area. The energy created does not go to people living in the capital, but to other privately owned mining companies. The energy companies claim that Chile is in a crisis, thus justifying these types of projects. Yet as a whole, roughly only 18% of the country’s energy goes directly back to the people. That leaves a whopping percentage going to mining companies- unregulated and unaffiliated with the government.

Right now, Chile is producing an active generation of talented climbers, skiers and riders that are passionate about the environment in which they live. If they are any indications of what is to come, there is hope for the preservation and proper use of places like Maipo.