Experience the most ambitious film tour in snowboarding movie history. Ten-time Big Mountain Rider of the Year Jeremy Jones revolutionized backcountry snowboarding with his two films, Deeper and Further. Now Jones and TGR are taking their endeavors to the next level for the third and final installment of the trilogy with Higher presented by Subaru, which premieres for the first time tomorrow at Jeremy's home mountain of Squaw Valley. In anticipation of the World Premiere, the Weather Channel interviewed Jeremy's brother, and TGR co-founder, Todd Jones on the trilogy and what comes next for TGR. 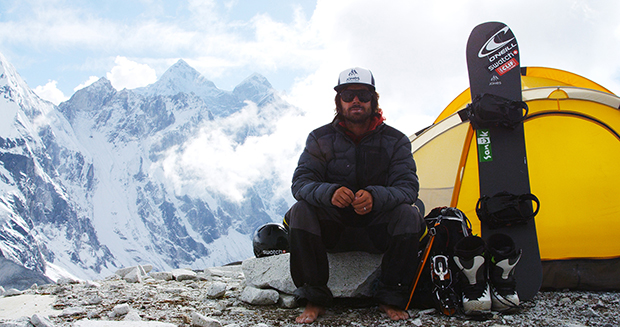 Jeremy Jones chills at the Shangri-La High Camp during the filming of Higher, with the Himalayas in the background. TGR photo.

To mark this epic conclusion, Teton Gravity Research has planned one of our most ambitious and expansive film tours to date, with over 200 shows worldwide.

As you can tell we are stoked about this film and the tour, and want the rest of the world to enjoy it as well. You can pre-order the movie and buy tour tickets here–Jeremy Jones' Higher is coming to an incredible location near you!