Avalanches happen. Whether it be from an unstable snowpack, an unsafe traverse, or even just unwarranted complacency, slides are a backcountry, sidecountry, and even frontcountry reality that ever skier and snowboarder has to address. And few people know this as intimately as Elyse Saugstad.

After over 30 years of experience and hundreds of hundreds of days spent in the backcountry as a pro skier, Elyse is anything but immune to the dangers of the mountains. After surviving a deadly avalanche in 2012, Elyse was forced to rethink the way that we engage with our environment, and in particular, how we can do our part to prevent situations like her own.

RELATED: Should You Take an All Women Avi Course?

Trying to make sure others don't repeat her own mistakes leading to her slide, Elyse founded SAFE AS, the avi course that makes snow safety accessible to women. We sat down with Elyse to chat about why her women only snow safety courses are crucial for even those “harmless” sidecountry laps.

Can you just give me a full rundown of how you came about creating SAFE AS, and why it's for women only? 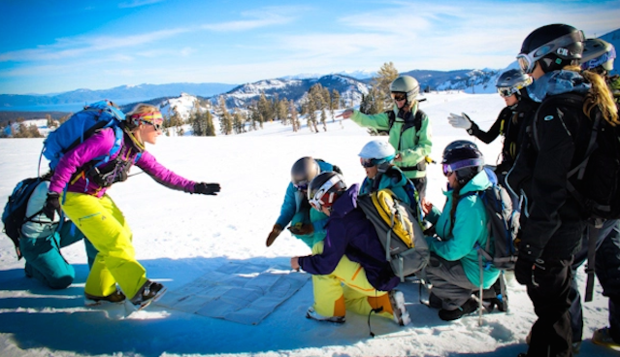 Yeah, so, SAFE AS came about when Michelle Parker, Jackie Paaso, Sherry McConkey, and I were doing some yoga one morning, and we were talking over coffee afterwards about snow safety, avalanche conditions, etc. from that previous year, because I was caught in an avalanche in 2012. So that summer was when this came about, with Michelle, Jackie, Sherry, Lel Tone, Robin Van Gyn, and myself. The Manaslu avalanche had just happened, we started talking about it, and we thought that there was definitely a place, or a way to teach more people about avalanche and snow safety knowledge, with a focus on women in particular.

That was for a couple reasons, one being that taking an Avalanche Course 1 is time-intensive, and costs a bit of money. So there is this gap between having no education, and having an AVI 1. We do not want cost to be prohibitive for ladies seeking snow safety education, so we have partnered with Coalition Snow, SheJumps, and Live Like Liz to offer partial and full scholarships to all ages. And we also felt that with women, it can be discouraging to take part in getting a higher avi education. It can be intimidating to join the boys' club, so to speak.

I mean the reality is that it’s unfortunately a male dominated industry. It is, and I know so many women that want to get into the backcountry, but they are nervous about it, and they don’t really have any expectations, they don’t really know if it’s for them. And you know, jumping into an AVI 1 class, it’s intimidating. Women [not all women] tend to think things through a bit more thoroughly, like “Oh, we should get educated before we just go.” So we decided we would create a program that fills that niche.

What are the differences in your curriculum between an all-women's course and a normal, mixed course? 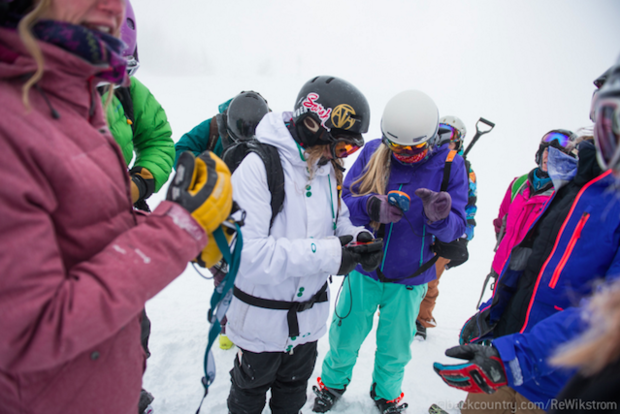 Well, I think some women tend to really strive in a female-only environment. They feel more comfortable. When men are present, or even just people who feel like they know it all, it's easy to doubt yourself, and we are trying to eliminate that. And the other thing that's really great is that these women are meeting other women with similar interests. And they can hopefully make some new skiing partners and new backcountry partners.

Are there specific challenges that women face skiing in the backcountry?

Yeah, definitely. I think women–not all women–struggle to find their voice in big groups of men. I know I feel more confident using my voice in a group of women in the last few years. It’s funny, before the avalanche happened, I didn’t realize that I wasn’t using my voice as much as I could have.

I agree, I think that’s true in most fields, but in particular a male dominated sport. It’s a weird thing. It’s not that anyone is doing anything wrong, it’s really just becoming cognizant of you who are and what kind of education you have. Whether you’ve taken all of your avi courses, or you’ve taken none, just being realistic about what you know is key. We feel like SAFE AS is a great refresher for people on all levels. And I’d like to point out, that even if you’re educated, when was the last time you took that class? It’s totally fine to go back in and refresh, and jog your memory. It’s just about being humble and honest with our selves.

What are some of women’s strengths in the backcountry? 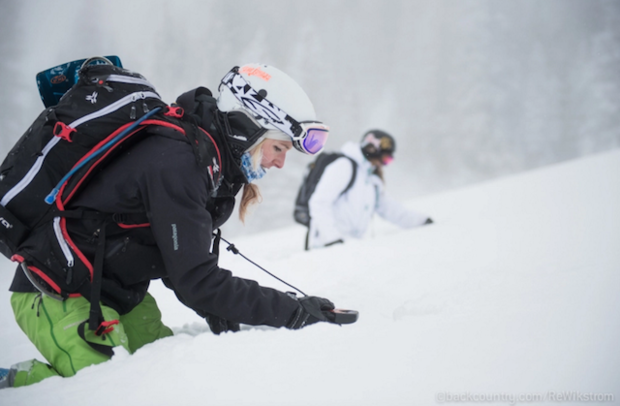 Learning to use your beacon, probe, and shovel. SAFE AS photo.

I think women are actually better at communication. Especially in female-only groups, I think we will more readily speak up and voice our concerns. Not to mention women tend to be more prepared, and being prepared with your partners is key.

Can you tell me a little bit more about the avalanche you were in, and how that inspired you to start this program?

Yeah, of course. You know, the avalanche that I was caught in, I had had plenty of backcountry experiences under my belt, and the people I was with were also very well-educated and really respectable people within our industry that were present for that day. In hindsight, I learned that even if you’re educated, there are so many cracks that you can fall into where we get complacent. Because I’ve been very public about the event and I’ve spoken about it, I’ve had to be really objective about what happened that day, and there are a million other things that I could talk about what may have led to that slide. It’s not a debate of what was actually the physical catalyst.

The point being, I’ve realized that I could have done other things differently that day. It was the day after a women’s clinic, and the next we were heading to Whistler, so I was just going to ski pow with my friends. I kind of tuned out, ya know? And that was my part of it. I can’t speak of the others or their decisions, but I know that’s what happened to me.

So, I think that I definitely have become way more methodical about thinking after the fact before I head into the backcountry. I don’t rely on others like I did. But it happens to all of us. And I like to keep that in mind. It keeps us honest. So often I feel like so many people that are caught in avalanches and die are educated people. 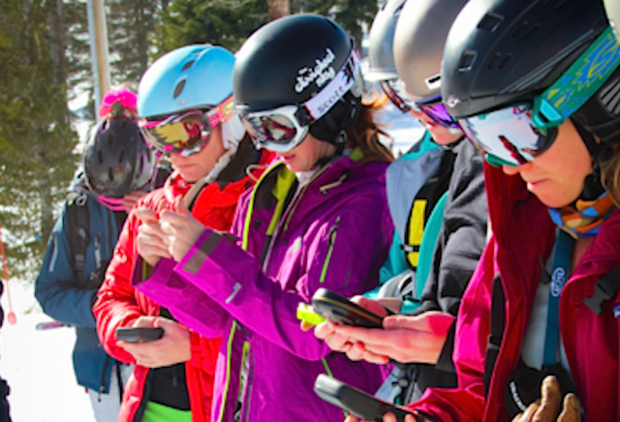 Students getting familiar with their beacons. SAFE AS photo.

First and foremost, it’s your head, and if you use that you will hopefully never have to rely on your gear. And that is why our SAFE AS program is a way for me present what I’ve learned from my mistakes so that it doesn’t happen to you. And first and foremost, it’s being educated and arming yourself with all the right information, and the right partners, to help your decision making process. And actually following through with that process every single time. But in particular, learning to say no. And don’t be afraid to turn around, don’t just have one goal in mind.

How do you qualify a good backcountry partner?

A good backcountry partner is someone you can communicate with effectively and someone who is on the same page as you. You should go out with a skier who has the same risk tolerance. That is really important. I’ve definitely gone out in the backcountry with people where I think, “Why would you go up that? Why would you snowmobile up that? That’s insane.” But they were very comfortable with it and I wasn’t. So some people just have different MO’s, and that doesn’t make for a fun day for either person. So finding someone with the same risk tolerance. And finding someone that is confident in saying no, and someone that is okay with you saying no.

So what does effective communication look like, for both men and women?

I think we need to communicate in a non-threatening manner. You don’t always have to attack their decision-making skills, but rather question the way they came to their decision, for example “Why do you think we should take this skin track?” And your tone can really have different implications. But the questions are crucial, because they force everyone to really thoroughly think through their decisions and communicate effectively as a group.

If you could boil your SAFE AS clinic down to a takeaway list for our readers, what would that look like? 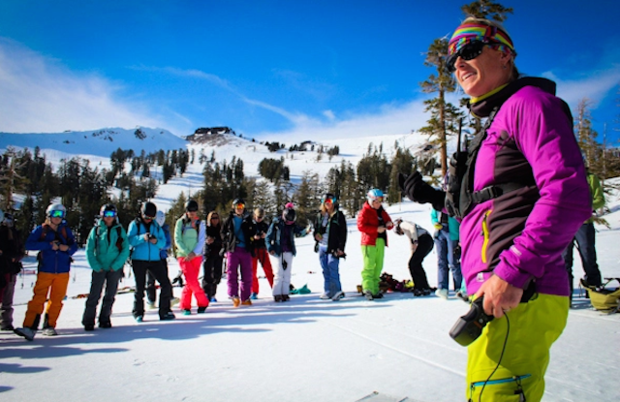 #1: Become familiar with snow safety. Pay attention to the weather, monitor the snowpack, educate yourself.

#2: Find your local AVI forecasting website. Make sure that you’re checking that all the time, whether it be an app, like this one, a radio podcast, whatever it may be.

#3: Choose smart backcountry partners. Don’t be afraid to make sure that your partners are up to standard on backcountry knowledge.

#5: Know how to properly use your equipment. That means practicing on a regular basis with your beacon, shovel, and probe. Just because you pull it out and try it on doesn’t mean you know how to use it. Simulate real backcountry scenarios. A lot of resorts actually have zones where you can do that with a buried beacon.

#6: Use your voice and be confident saying no. This in particular happens all the time, but you might feel like you are less experienced than your other partners in your group even if you aren’t. It’s common to feel intimidated to speak up. That’s a really big thing for me, with men and women. When communication breaks down, that’s when everything goes wrong. And, also, have alternate plans. Don't be afraid to say no and resort to plan B.

If you're interested in taking one of her courses (which you should be), check out their website and schedule here–December stops are coming up at both Squaw Valley and Copper Mountain.