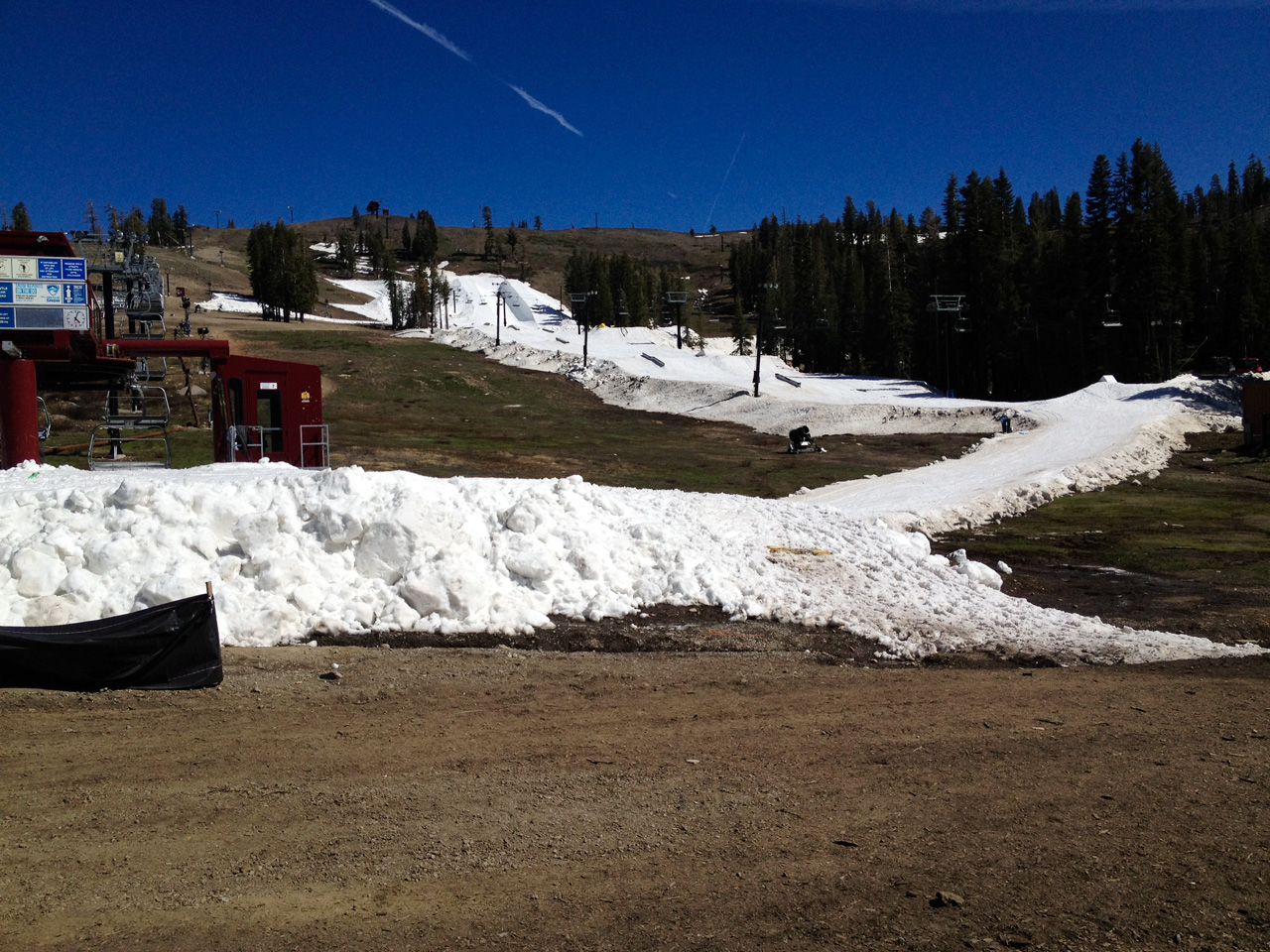 It’s June after the worst and warmest winter in Tahoe’s recent history. Golf courses down the street from the biggest resorts were open through January. Squaw Valley’s legendary Fingers weren’t even skiable until late February. Yet just twenty minutes away at the top of Donner Summit, petite Boreal Mountain Resort with 500 feet of vertical hosted the Grand Opening of the new Woodward Tahoe with a lift-serviced terrain park counting fifteen features, a fifty-foot money booter, an airbag, and a perfectly-shaped 22-foot superpipe. The gods, as the saying goes, must be crazy.

It appears that terrain park construction is steadily reaching the levels of inventiveness and trickery that go down in those same parks. Boreal’s marketing director Jon Slaughter said the idea came about three years ago when Boreal’s staff returned from their May vacations and saw a copious amount of snow still on the ground in the first week of June. Boreal’s base elevation is 7,200 feet — a full 1,000 feet higher than Squaw’s base, helping the snow last longer. That year saw the first public summer shred day, with a park as good as any that had been built that winter. The following summer, after historic snowfalls totaled 770 inches during the 2010-’11 winter, Boreal hosted a summer camp June 20-24, with jibs, a two-jump line, a bag jump, and an 18-foot pipe. That summer, Boreal was open to the top. 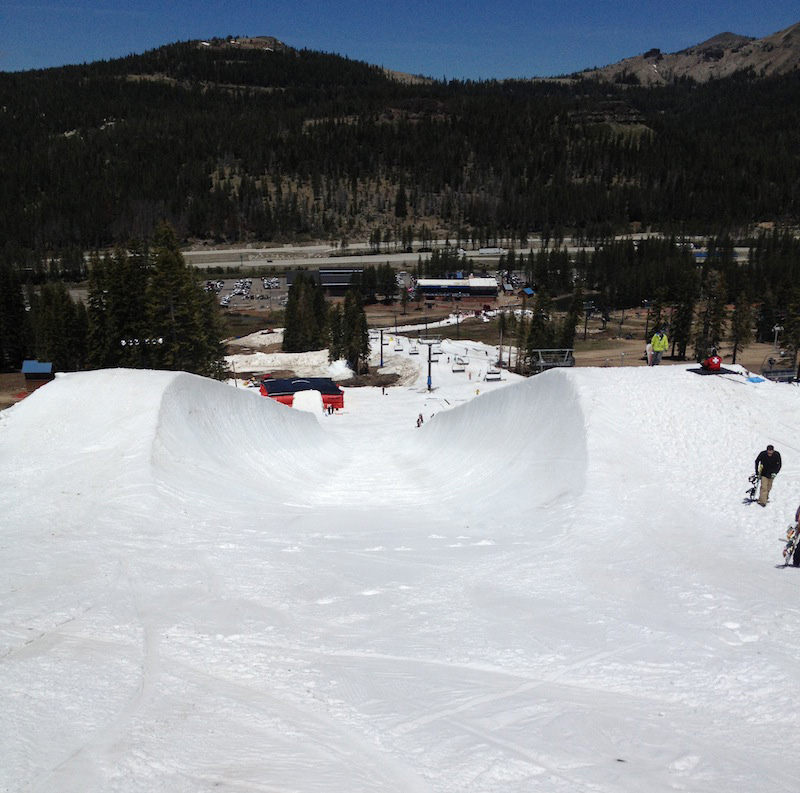 In building a park for the inaugural summer snow camp of Woodward Tahoe, the newest branch of the growing franchise and featuring Woodward’s signature bunker stocked with foam pits and skate bowls and trampolines, the challenge was considerably greater.

Despite the resort being the only one in Tahoe to eek out enough snowfall in the spring to equal their season average — 400 inches in Boreal’s case — natural snow wouldn’t do it alone. So, with good snowmaking temps, Boreal turned the snow guns on well into March, quadrupling their average annual snowmaking output from ten million gallons to forty million. Then, as soon as the mountain closed in April, the park crew led by veteran Eric Rosenwald spent one hundred hours in the snowcats farming the snow all the way to the dirt, and pushing it all in between the walls of Boreal’s 22-foot in-ground superpipe. Once the pipe had been filled deep enough to make a flat walk from wall to wall, the crew let the snow glaze over and freeze, utilizing the protective pipe walls as something of an incubator.

Knowing that any cat work with the snow would accelerate the melting, Woodward Tahoe staff waited until last Monday — five days before Woodward Tahoe’s grand opening — to push the snow into an elaborate park. But after all that, doesn’t having a 22-foot superpipe, usually the most snow-intensive feature out there, seem a little optimistic?

“Our competition — Windells, High Cascade — they all have 22-foot superpipes,” Slaughter said. “So we had to have one.” 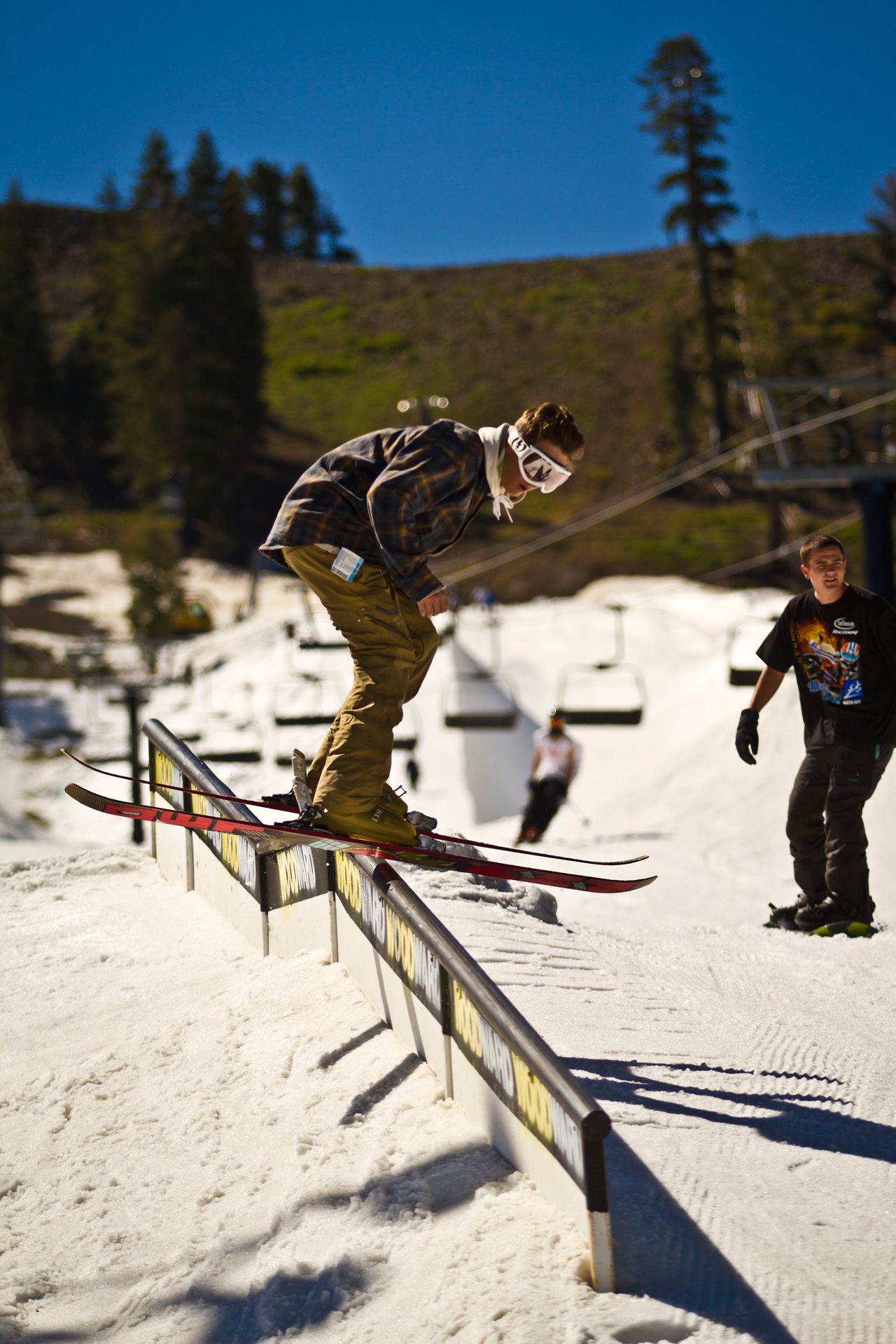 A skier at Woodward Tahoe slides a rail at Boreal. Photo by Danny Kern.

While the halfpipe is only expected to last for another two weeks before being taken down to supplement the snow on the rest of the park, Slaughter expects Woodward Tahoe skiers and snowboarders, as well as a couple pros such as the Inspired Media crew, will be shredding real snow through the first week of July. Slaughter hopes that their performance this summer, along with the brand-new training facilities at The Bunker, will entice the best athletes to make Woodward Tahoe their summer training grounds in the lead up to the 2014 Olympics.